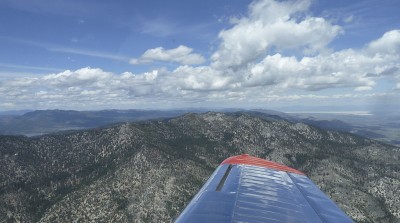 I finally got back into the air for a short flight last week. We had a good day in the middle of the week with storms predicted to move in the next day and throughout the weekend so I took a break from website work and headed out to the airport.

I wasn’t the only one who had that idea – there were 3-4 planes in the pattern most of the time I was in the air.  I just pulled the power back flew around north and west of the airport for a while – getting as far as Beckwourth/Nervino (O02) before I turned around. The air was a bit bumpy so I stayed below the top of the green arc as I flew around and at various times fed the engine from each of the tanks to even the fuel load out.

I got back to the pattern about a half hour later and joined the other two planes practicing landings. One made a full-stop fairly quickly but the other stayed in the pattern with me as I completed 5 touch and gos. It takes a bit of planning for me to share a pattern with another plane. It seems that I fly my patterns much closer to the runway than anyone else. Maybe it’s because of the glide ratio (see crowbar)  of the Swift and my attempt to  stay within reach of pavement if the engine quits. I have had Cessna and Piper pilots fly with me say that if they flew my pattern ground tracks they would never be able to get down to the runway with enough pavement to complete a landing. That’s what makes flying fun – no two planes and no two flying days are ever the same.

June is my annual inspection month, so when I got the plane back in the hangar I got out my inspection checklist and started taking things apart. Since the engine was still warm I did the cylinder compression check first, then got the oil change started.  While things were progressing on their own at the front of the plane I moved aft, removed all the fairings and started looking in all the nooks and crannies for things that didn’t seem quite right.

With my work schedule and some weekend commitments with the Carson City EAA Chapter it will probably take me the rest of the month to finish the 100-Hour/Annual. At least it has rained the past couple of days…

If any of you are in the eastern part of the country and need somewhere to fly this week/weekend, the Annual Swift National Convention is June 10-14 in Bowling Green, KY. Lots of fun activities planned.