I was doing my best last week to get my Swift radio installation progress a little farther along on the project timeline but every time I turned around there was another interruption. 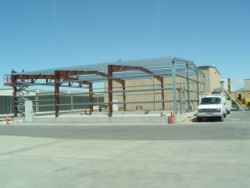 My first challenge was this building that popped up on a direct line between my hangar and the bathroom.  I swear, you go out of town for a few weeks and all sorts of things change.  It looks like a really nice-sized hangar. It appears that it will even be outfitted with its own bathroom facilities. I would hope that the owner is going to put in a shower or something. If not,  I would have to think twice about the added expense when the building is only about 10 yards from the airport’s facilities. What they heck, it’s only money.

I worked in my hangar for most of the morning without too much to distract me. I stuck my head out a couple of times to watch a Skycrane helicopter transit the area. A while later a Chinook helicopter went by in a different direction.  Neither type is a stranger around the airport, but they’re still fun to watch.

On my way off the airport property to find lunch I noticed that a couple of planes had been pulled out of one of the larger hangars. They were painting the exterior of the building, so I though that might be the reason. 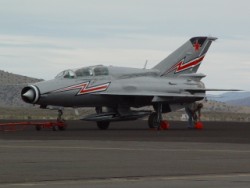 We have seen the Mig-21 in this column before, but not this close.

After lunch I returned to my project in the hangar.  Not too long after I got started I received a call from my wife about an errand to run on my way home that night, not unusual, but right in the middle of the conversation the noise of a jet taking off made it impossible to talk on the phone even though my hangar is quite a distance from the runway and the hangar doors were closed. The Mig was going flying. 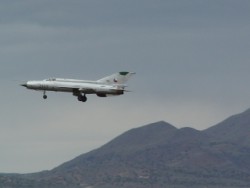 We finished our conversation after the sound died away and I went back to working. About 45 minutes later the din returned, this time in the form of a low pass down the runway. No way was I fast enough to catch that on film, but I did manage to make it to the ramp for the subsequent touch-and-go and landing. It’s pretty neat to have that sort of thing going on at your airport. I’m sure that are a lot of neat aircraft at many of our airports, but you don’t often get the chance to see them our flying or to catch them on film (ok, SD card).

Soon the show was over and I was back to work. About an hour later I heard a round engine and it wasn’t a small one. Hmmm. Could it be one of the Unlimited Racers out testing a new engine. A Lancair Legacy racer had been out breaking in a new engine that morning, so it was possible. It sounded like the plane had landed so I once again grabbed my camera and walked out to the end of the hangar row. Nope that wasn’t a racer. Taxiing by at the edge of the ramp, headed for the fuel pit was a Fairchild C-123.

I had no choice but to go get into my truck and head down to the other end of the airport. 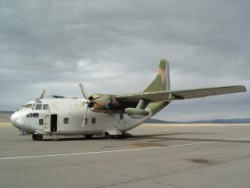 You see, I flew the C-123 for about a year in Southeast Asia. That was my first operational assignment in the USAF. I had graduated from pilot training in Texas and was then sent to what at that time was called Lockbourne AFB in Columbus, OH. The base was later renamed Rickenbacker AFB, then was subsequently closed and is now known as Rickenbacker International Airport (KLCK). At Lockbourne/Rickenbacker I was assigned to a retraining unit (RTU) and ‘upgraded’ to the right seat of the C-123.  I went from a supersonic trainer (T-38) to the 120-knot C-123K and traded in flying high-altitude TACAN penetrations to trying to figure out how to fly a fixed-card ADF approach. Yeah, culture shock. Ironically, those pods just outboard of the radial engines house G.E.  J-85 jet engines, the same engines installed in the T-38 (minus afterburner, of course). You can also see mounting points outboard of the jet pods that are used to attach fuel drop tanks.  The crew on this plane said that they had removed the drop tanks and shipped them to Alaska separately. They hadn’t made them operational and didn’t want the extra weight and drag associated with leaving them on the wing mounting points or carrying them in the cargo compartment. The jets located in those underwing pods make this a ‘K’ model C-123. Without the jets, it would be a ‘B’ model and if the jets were attached to the wingtips it would be a ‘J’ model. 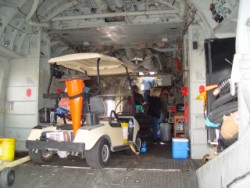 The only  C-123J I have seen was parked on the ramp in Anchorage. It was  in really bad condition and was eventually purchased by a cargo outfit in southern Alaska, probably to be used as spare parts. The same company had also purchased another C-123 that used to be based at Stead. That particular aircraft had been used in the movie Con Air. It is now in Alaska, I believe being used to haul drilling equipment.

This aircraft had been picked up in Titusville, FL and was also enroute to Alaska. The crew of three had worked on the plane in Florida until it was safe to fly, then set out on their cross-country. The view view from the cargo loading ramp is looking forward toward the cockpit. The were carrying their airport transportation (golf cart) and had built a work bench in the cargo compartment while they were getting the plane ready for the trip. 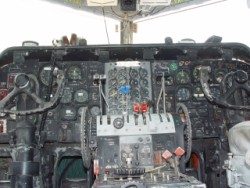 I took a nostalgic trip down memory lane and climbed up to the cockpit and sat in the left seat for a while. I remembered a little of what I saw, but not all of it. For one, I don’t remember there being a Garmin 496 on the overhead panel. How could  I have missed that? This aircraft didn’t have the armor plating around the cockpit seats, either. Nice to have then, probably a little too heavy to be carrying around now. The VHF radio was there, but the HF and FM radios were gone. I guess they won’t be needing to contact any artillery sites on their route to Alaska to see if they are firing in their direction.

If you look closely in the large version of the cockpit photo, at the bottom center you can see a couple of trim wheels, one right in the center of the console. Just above that trim wheel you can see two silver toggle switches, looking at the top ends of the switches. 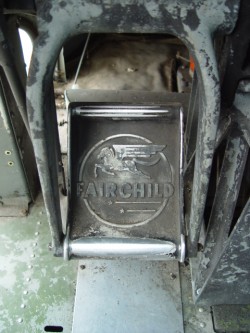 The toggle switches are spring-loaded to the center position and have a lever-action up or down. Those are the throttles for the jet engines. For landing we ran the jets at idle, just in case we might need them for a go-around. For takeoff, once lined up on the runway, we ran them up to full power by holding the toggle in the up position for about 6 seconds. With a fairly light load and with the jets at full power you could climb out at 2500 fpm. Pretty impressive for something that started out as a glider (XCG-20).