Good Weather and a Nice Visit 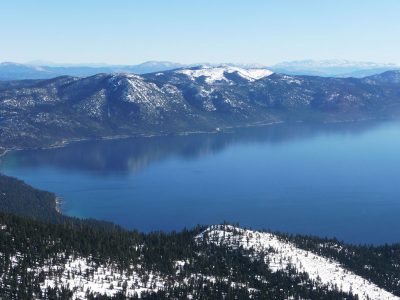 Lake Tahoe looking east from about Kings Beach with Incline Village out of the picture to the left.

I finally got back up in the air again over the holiday weekend. It felt like we were right in the middle of the weather system route for most of the Spring. Now we’re swinging the other way.

The last ski area closed this past weekend – and now we’re forecast to see 100 degrees next weekend. Life in the high desert.

The winds were forecast to be a bit strong down in the CA valleys and there was a good chance of thunderstorms building over the Sierras, so I opted to stay on this side of the mountains. I called up my friend down in Minden, NV and arranged to meet for a late breakfast at the Taildragger Cafe on the airport. Always a good meal there – and seating with a nice view of the flight line.

The air was a bit hazy for the flight down by way of Lake Tahoe, so I didn’t bother to take any photos. The photo to the right is from a previous flight along the same route. It was a nice flight anyway, and good to get back into the air – it had been a bit over a month.

I flew the direct route back to Stead through the Class C airspace around Reno – getting clearance through the area from NORCAL Approach at 7000′. That was a much bumpier ride – the temperature had started rising and the usual afternoon breezes around Reno had started to puck up. When I left Stead the winds were calm to less than 5 knots from the east. For my return they were 140/6G19. Since it had been so long since my last flight I chose to use runway 14 rather than practice my variable crosswind technique on runway 8 and have a much shorter taxi back to the hangar. Even so, the landing was ‘interesting’ and I was glad there was 9000′ of runway to play with. Twice, as I was about to touch down a gust put me back into the air, not necessarily pointing in the original direction. So, add a bit of power and start over again with the flaring part of the process.  Even so, I managed to turn off by the midpoint of the runway.

All-in-all a very nice day and a good way to begin the 3-day weekend.

A Visit to the Reno Aviation Museum