I have had a few requests for photos of the Swift that I fly on my days off, so yesterday before I went flying I took a few quick shots. As usual, the small photos click through to larger versions. 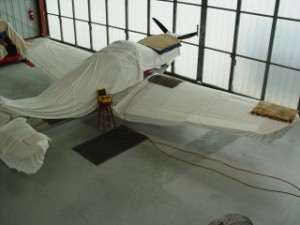 This is the way that the plane spends most of it’s time. My friend in the hangar across from me refers to it as the “RagWing Swift.” The plane is polished aluminum, so I keep it covered when I don’t plan to fly it for a while. It keeps most of the dust off the plane and “breathes” so no moisture collects on the aluminum skin, should it rain. The yellow box is the battery tender that is connected to the aircraft battery located behind the baggage compartment. This photo was taken in late winter, so a blanket and layer of carpet are laying over the engine compartment to keep in the heat from my home-made engine pre-heater. There are also scraps of carpet or towels at the wingtips to keep the  sheets from blowing off when the hangar doors are opened. The pre-heater I made up is just a small ceramic heater with a built-in fan. I attached a metal heating duct adapter to the front and taped some metalized dryer ducting to the adapter. The ducting is easily molded to the proper shape to fit up inside the cowl air exit. As a last step, I wrapped the dryer duct with self-adhesive insulation to help minimize the heat loss from the heater to the engine compartment. I turn it on for about an hour before I pull the plane out to go flying. It seems to work really well. You can feel the heated air coming out the front of the cowl. 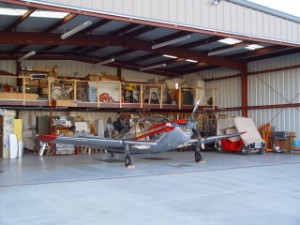 When it is uncovered and the hangar doors are opened, it looks a little better. I bought the Swift from an estate a few years ago. It was in a pretty neglected state and I have been working on it slowly, trying to get it into presentable shape. I owned my previous Swift for 36 years and had it pretty much the way I wanted, but it was powered by a fairly old 145 hp six-cylinder Continental engine. Up here in the mountains the higher density altitude meant a very noticeable change in engine performance. It became a single-person airplane, even though it had two seats. This Swift  is also outfitted with a six-cylinder Continental engine, but this one is generating 195 hp. It is an IO-360-KB and the 2600 rpm engine limit results in a 195 hp engine rather than the 210 hp that the 2700 rpm versions of the IO-360 produce. The extra engine horsepower and the 3-bladed constant-speed McCauley propeller make this a very comfortable aircraft to fly here, even in the summer. 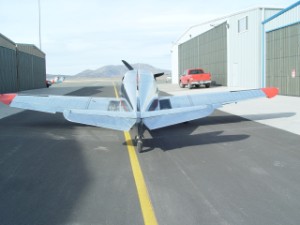 The airplane is flyable, though there is still a very long list of “to do” items. Most of the electronics in the plane were shot, having been installed about 15 years ago. The previous owner had intended to upgrade the instrument panel and avionics, but passed away before he could begin the task. I installed a new transponder and encoder and have been limping along with a marginal communications radio since I began flying the plane. I now have a brand new Garmin SL-30 to install with a new antenna and cable. That’s my next project. There is still the matter of new interior upholstery and a new instrument panel. It seems that every time I talk to someone about getting more updated things for the Swift they say they want more of that money thing. Evil circle. 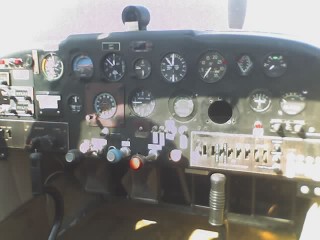 I look  at pictures of the instrument panels people are flying with now and am amazed at the technology available. In this photo, taken the day I bought the Swift,  you can see what happens over the years to the instrument panel of an older aircraft. Instruments are often installed where they fit rather than where they would be most functional while others are removed and holes patched. The hole in the panel on the right side is left over from the conversion from yolk to stick flight controls. The original control yolk arrangement with it’s attendant attachments behind the instrument panel made it impossible to install the standard ‘6-pack’ of IFR instruments in front of the left seat. Instruments were shifted and rearranged, not always successfully,  to  get them on the left side of the panel. I have a blank instrument panel to use for my upgrade, but it will be a long, involved project.

Now it’s almost Spring again and the start of the new flying season (I say this as it’s snowing in Atlanta), which brings another Swift project to the list. The annual polishing ritual. It’s actually a good way to just get away from it all. It’s a not something that expends a lot of brain power, however since you cover each square inch of the airplane surface, it is a good way to take a close look at the condition of the plane while you are making it look better. In case you are interested, I use Nuvite polish, a Cyclo Polisher and untreated sweatshirt material to polish the airplane. I buy all my supplies from the fine folks at PerfectPolish.com out here on the West Coast. The same materials are also available through the Parts Store of the Swift Museum Foundation.