I apologize for taking so long to get another article posted.  It’s been a crazy month or so between working on the Swift and my day job trips. 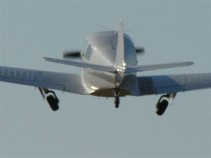 I had a long period off between trips in August and , in spite of temperatures in the hangar over the 100 degree (F) mark, managed to get the Swift almost back to flying condition. The last item remaining on my to-do list was a transponder/encoder check that had expired while I was accomplishing my other projects. Unfortunately a couple of trips for my employer interrupted my progress. Work gets in the way of fun yet again.

My first trip consisted of a  flight to Shanghai for a 60+ hour layover and a flight back to the U.S., not a hard trip by any measure, but it still required about 3 days to recover from the time zone changes. That left me one day until the commute for my next trip, an 8-day journey with 4 Pacific crossings.  I had barely recovered from that when I had to go sit on call for 4 days.  I wasn’t used to fill in for a sick pilot during my on-call days, so I took the time to get back on something approaching the right time zone and to catch up on emails, manual revisions and general reading.

Back home again, the work on the Swift continued. A couple of days later I had scheduled and completed the transponder/encoder check. I only have a VFR check done, since I have no inclination to fly the Swift in IFR conditions. It just isn’t a very good IFR platform unless you install an autopilot with at least a wing-leveling function. The controls are well harmonized, but very responsive.

The next day I finally got back into the air.  It was a really nice feeling. The last time I had taken the Swift up for a flight was back in February. I took off, flew around the airport area for a little while to get my ‘air legs’ back and then headed for Quincy, CA (2O1), one of my favorite breakfast destinations. It was a beautiful day for flying, clear, cool and smooth. I had a nice breakfast while reading a few articles in the latest Sport Aviation then flew back to RTS taking the time to do a little sight-seeing on the way. I stayed in the traffic pattern for a little while and regained my tailwheel landing currency. I probably would have stayed up longer but the pattern was beginning to fill up with local pilots getting their fill of flying before the airport became unusable. RTS is the site of the National Championship Air Races each September. The airport is turned over to the Reno Air Race Association and for a period of approximately a week and a half is unusable to all except race and support aircraft.

Next week I will be flying to Jackson,Westover (O70) for the 25th West Coast Swift Fly-in.