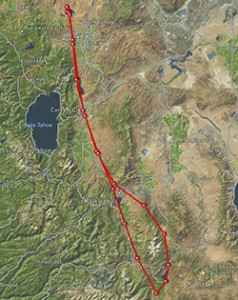 I finally got the Swift back into the air this past weekend – the first flight since the last week in August.  A friend with an RV-6A said he and another RV builder/flyer were going to fly ‘down’ to Bridgeport, CA for lunch. Down in the sense that it is south of Reno but the airport elevation is actually higher than Reno-Stead. Stead’s official field elevation is 5050′ MSL while Bryant Field (O57) is at 6472’MSL. I had never been there, so I said I’d join them for lunch.

We agreed to take off at about 10:30 for what ForeFlight said would be a 45-minute flight. I generally add 15 minutes to that estimate to account for maneuvering on departure and arrival. That was especially true in this instance since I would have to be at about 10,000 feet until about 12 miles from the airport to clear the mountains around the valley where Bridgeport is located.

It was a beautiful day – mid 80s and light winds . I took a route through the middle of the Reno Class C and talked to NORCAL Approach. They were nice enough to point out that my friend in the RV was both higher and faster than me. I told them that yes, I knew and if I forget my friend reminds me. He got a chuckle out of that and approaching the Carson City area cleared us off to VFR frequencies.

Parked on the ramp at Bridgeport (O57)

The yellow RV belongs to another Stead tenant who brought his wife along for lunch. They left Stead earlier than us and made a side trip to look at an off-airport location that is supposed to be the site of future fly-in. We were just shutting down when they landed.

Unfortunately, our third pilot said he noticed an unusual vibration while taxing to the ramp and upon investigation found that his left main tire was going flat- having reached total flatness by the time we all took a look. We decided to go to lunch and figure out a solution on a full stomach.

We walked the two blocks into town and after deciding the wait at the Hays Street Cafe was too long we walked down to the Bridgeport Inn and were seated immediately. We had a nice lunch in the beautifully restored Inn and soon found ourselves headed back to the airport to figure out a solution to the tire problem.

Since it was Sunday, there are no services on the airport and none of us had a spare tube or tools we figured that the only option was to fly back to Stead, gather up what was needed to accomplish the task and then fly back. The husband flew back in the other RV and I took the wife.  I was at gross weight for takeoff and the density altitude was over 9000′ with a 4200′ runway length so I didn’t expect stellar performance. I know, you are supposed to figure out the takeoff performance before you depart. The problem is that back in 1948 aircraft manufacturers didn’t publish performance charts – and even if they did, the planes they were producing had either an 85 HP or a 125 HP engine with a fixed-pitch prop. The engine in my plane produces 195 HP while turning a 3-bladed constant-speed prop.  The charts, if they had been required to produce them, would have said to take the plane apart and truck it out. We lifted off a bit past mid-field. I got the gear up and accelerated to about 110 mph and climbed out at whatever it gave me – 300-500 fpm. We departed over what was left of Bridgeport Reservoir (not much) and then headed down the valley on the east side of Mt. Patterson. I climbed up to 8500′  MSL then when the mountains permitted turned west toward the route I had used to get to Bridgeport. The other two in the RV were off the ground before I got my engine started but we landed before they got back to their hangar. So, for the distances involved today the speed difference wasn’t particularly significant – though the fuel burned was much less for the RVs – by about half.

Back at Stead the two RV guys got their heads together and figured out all they wanted to take back to Bridgeport and headed off to do the tire change – actually I think they changed both wheels/tires to an off-airport set that he had. I got a text message about a half-hour before sunset that the planes were both back at Stead and safely tucked away in their hangars.

The day didn’t turn out as it was planned but it was enjoyable nonetheless. I took a few photos on the way down that show a bit of the terrain and fall colors in the area. 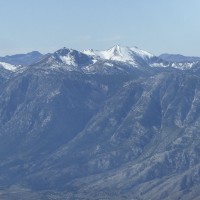 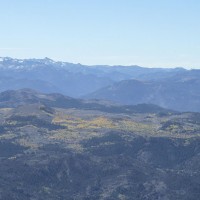 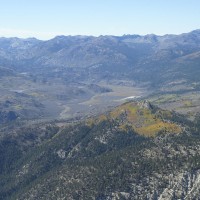 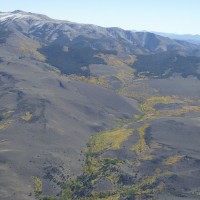 The SW side of Mt. Patterson.

Currency and the Professional Pilot