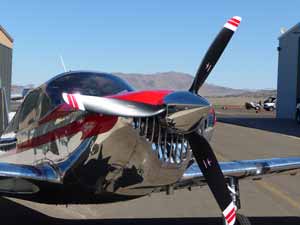 A couple of articles ago I mentioned that I was out of the air for a while because my prop was leaking fluid that should have been contained in the hub – red-dyed lubricating oil. The saga is now complete and I  thought you might like to hear how it all played out…

When I found the leak I placed a call to the IA (Mechanic with Inspection Authorization) who I work with and he recommended a shop in Stockton, CA. I had another mechanic who has a hanger around the corner from me recommend a different shop and I had worked with a third shop when I had a previous prop overhauled. I ruled out the mechanic’s recommendation because they did not provide pick-up/delivery service. For a two-bladed prop this might not be a factor, but a 3-bladed prop with a 74″ diameter is a bit unwieldy – even for a pick-up truck.

That left two options, so I called them both. I mentioned in the previous post that I asked each a few questions and then decided on the one.  I chose to go with American Propeller in Redding, CA. The only negative with them was that, though I called them on about the 12th of the month, they weren’t going to be able to pick up the prop until Monday the 22nd.

So, I took my time and got the prop off, did a visual inspection and placed it on a wooden pallet in the hangar and worked on other projects while I waited. The following Tuesday (16th) the prop shop called and said their schedule had changed. They would be able to pick it up that Friday (19th) – good news. They probably wouldn’t work on  it that weekend, but it would be ready to go in their shop early Monday morning. 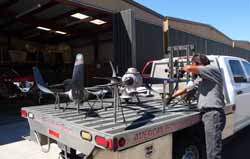 The driver arrived a little behind schedule Friday, but after I heard the route he had to take for other pick-ups I understood the delay. You can see my prop on the left rear of the truck in it’s special cradle. He is putting really tight rubber straps around each blade to hold the prop in place. I believe he said the one on the left rear was involved in a runway overrun that buried the airplane’s nose in the dirt – it’s now probably only good for some minor parts that may not have been damaged. I don’t think I’d even want that one on my wall.

On the following Tuesday (23rd) the shop called. They had dismantled the prop and inspected it and found no discrepancies and were going to replace all the seals in the hub rather than go through a complete overhaul – money saved. The blades had been stripped of paint and inspected and were being repainted the next day. They planned  to deliver the prop on Thursday (25th). I agreed and gave them a card for payment in full.

The only challenge was that I would be out of town that day. I arranged with a friend in a hangar around the corner to have him let the delivery driver into the hangar, set up a place for them to put the prop and called the shop back to give them my friend’s cell number so the driver could call him when he was about an hour away.

On Monday I arrived at the hangar to find a semi-new prop all encased in plastic waiting to be re-installed. Seven calendar days from pick-up to delivery. The package included all the paperwork associated with the re-seal operation – logbook entries and completed work orders. There was also a package with a tube of lubricant to be used during the installation. The maintenance instructions specify that the torque on the prop bolts is a ‘lubricated’ torque.

I got a helper from an adjacent hangar (with his newly calibrated torque wrench) and the process was started. It only took a few hours for me to get it all on, the nuts torqued and everything cleaned up – that lubricant did a job on everything it touched.

The next day the winds were forecast to gust to 40, so I limited myself to taking the plane out to the ramp and running it up to warm the oil and then cycling the prop fully through it’s operating range to get the hub pitch-change mechanism filled with engine oil.

The day after that I flew for a half hour and then re-inspected the prop. I had full rated RPM on takeoff, the prop held it’s set RPM in flight  and everything was still shiny and without a drop of oil anywhere it shouldn’t have been after the flight. It’s probably just wishful thinking, but it even seemed to run a little smoother. I did notice that the balance weights had been moved from their original position.

The day after that I flew down to California and had breakfast with a friend at the airport where I used to be based. Nice flight and the prop worked great. I’m completely satisfied with the service I received and the work that was performed. At this point I would not hesitate to recommend American Propeller in Redding (part of Ameritech Industries).