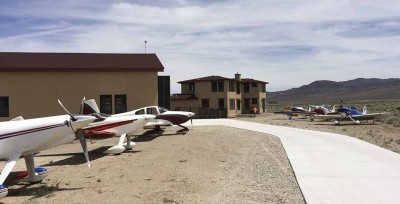 The taxiway leading to the Dye hangar/home.

Saturday I attended a ‘hangar-warming’ at the Dayton, NV airport, an airport community just to the east of Carson City. New Carson City EAA Chapter (EAA403.org) members Paul & Louise Dye recently had a home and hangar built there and were gracious enough to invite the chapter to their get-together. 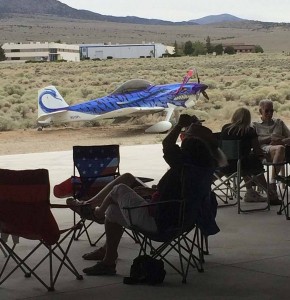 Paul’s RV-3 parked in front of their hangar.

Paul worked for NASA at the Johnson Space Center and was NASA’s lead flight director for three Phase 1 missions: STS-79, STS-86 and STS-91. With the termination of the shuttle program he retired and moved on. He is now Editor in Chief of Kitplanes Magazine.

It was a great BBQ and a chance to make new friends and say hi to old friends. Paul and Louise – thanks for the great hospitality! Welcome to the high desert – just a bit different than Houston…

I chose to drive in rather than fly. Stead was still under a TFR for the Pylon Racing School. There were 15-minute periods 4-5 times through the day for local arrivals and departures and the no-prop line was in effect. That would have required towing my plane to the edge of the ramp, chocking it, taking the golf cart tow vehicle back to hangar and locking up, then walking back to wherever I left the plane and starting the published departure procedures. Then I would either have to wait until after 5 pm to return or be restricted to one of the allowable time periods.  Yeah, I’m a whimp… 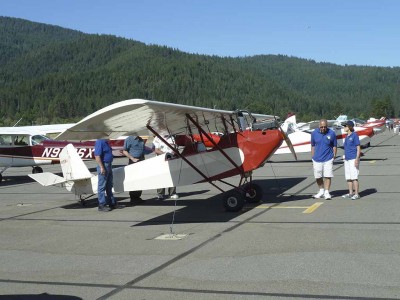 Pietenpol Air Camper built from plans buy the same person who built the Wittman Tailwind parked next to it. You can see my Swift just past the Tailwind.

On Sunday I pulled the Swift out and flew over to the Quincy, CA airport (2O1) for their Father’s Day Fly-in and pancake breakfast.

They had a really good turnout for a small aircraft located in a mountain valley. One strong incentive for attendance was their decision to sell 100LL at their cost during the event. I took advantage of the 30-cent reduction in price and put 30 gallons in the plane.

After a nice breakfast I walked around with a few of the Carson City EAA Chapter members who also flew in. There was a good cross-section of general aviation planes in attendance and everyone seemed to be having a good time. It appeared that they had a good turnout from the local residents, too.

There was a very nice looking Stearman sticking out of one of the hangars down the ramp, so I made my way there to take a look. 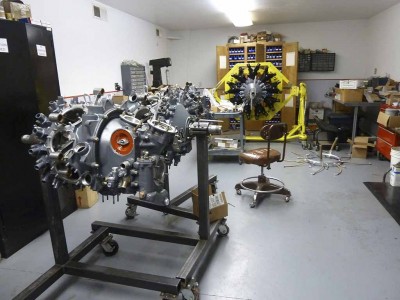 It was a very good restoration, but even more interesting was the hangar and all that was in it.

I had managed to come across Al Holloway’s radial engine rebuilding business. He had all types of radials in various degrees of rebuild and even an old Menasco sitting on a pallet waiting it’s turn. In talking with him we found that he is currently the only engine rebuilder in the country working on the Warner family of radial engines.

Al is a really nice guy and took quite a while to give us a detailed tour of his facility and a little of the history behind how he got into the business.

It is shops like this that keep the older aircraft flying and it is really sad to see them closing. Sooner or later we all reach a point where we can’t do the things that we once could. When that day comes who will take over and continue the work?  Who will preserve the art of the radial engine rebuild? If you are mechanically inclined, love doing things with your hands and take pride in your work then getting an apprentice position in one of these shops may be a viable option. You may never be a millionaire but you can become an expert in a field that is becoming dangerously narrow.

Past Time for an Update