Right now it’s Wednesday morning and the Thunderbirds are beating up the place with their ‘arrival show.’ They are performing at Reno only one day this year – tomorrow (Thursday).

I seem to be having computer/camera challenges today. When I attempted to do some photo re-formatting at home last night my copy of Photoshop locked up. So I’m doing all my work in the hangar on my notebook. But I forgot the camera cable, so the photos of the qualifying results are stuck on the camera’s SD card. I’ll get this out and then go try my neighbor’s card reader and see if it works. If you find an extra photo at the end of the article with the qualifying times you’ll know it was successful.

Day two was taken up with more qualifying periods – and more vendors setting up their displays. The end of my hangar row now has the Piper display area with their King Airs, etc.  Here are a few more photos – Most of the remainder of the Unlimited racers. 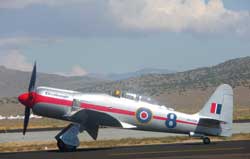 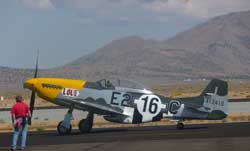 This is listed as an F-51 Mustang, Race 16 “Lou IV” flown by Chuck Greenhill.

This is a P-40E, Race 18 “Sneak Attack” flown by John Maloney of the Planes of Fame in Chino, CA. My shutter speed isn’t super fast – the prop was stopped as he rolled to his parking spot. 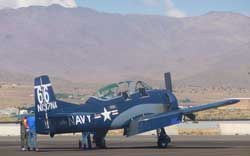 The lone North American T-28B in the race, Race 66 “The Bear” flown by Dave Morss.  Way back when the T-28 group used to have their own race class, similar to the T-6 group now. Not sure what happened.

The second Grumman F8F-2 Bearcat in the field. This is Race 52 “Blue Angel #1” flown by Nelson Ezell. The other bearcat, of course, is Rare Bear, Race 77. 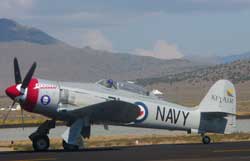 There are 5 examples of the Hawker Sea Fury in the Unlimited Field this year. This is Race 71 “Sawbones” flown by Dan Vance. 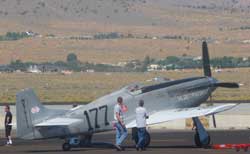 This is listed as a P-51D and I guess that’s how it started, but it’s a bit modified. This is Race 177, “Galloping Ghost” flown by Jimmy Leeward. The wings have been modified, the canopy is obviously not original and the belly scoop is removed with engine cooling now provided by a ‘boil-off” system. 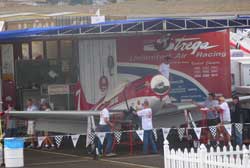 I was up on my neighbor’s balcony and shot this. Strega in it’s pit area minus propeller. They must have found something after that blistering qualification run – or they’re trying to go even faster.