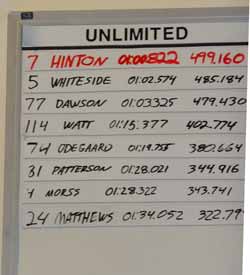 The first few days of the races are qualification days. The various classes of racers are given course time. If the race team thinks they are ready the pilot signals to the timer that they want to begin a qualification run. Three laps are timed and the results recorded. The qualification times determine whether the plane starts heat races in the Bronze, Silver or Gold class for their type of racer and it determines where in the class they will line up as they approach the starting line.  You can see here that Steve Hinton, Jr. qualified in Strega (Race 7) at 499.160 mph. Race 5 is Voodoo and Race 77 is Rare Bear. Race 114 is Argonaut, a Sea Fury, Race 74 is shown below. Race 31 is the P-51D Speedball Alice, Race 4 is the P-51A Polar Bear, and Race 24 is the second F4U Corsair in the race field. Qualification runs will continue through noon on Wednesday.

Here are some other photos I took while wandering the airport Monday: 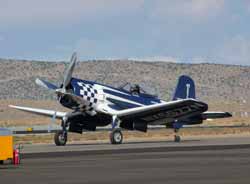 This is a new entry this year. Here is Bob Odegaard returning from qualifying in Race 74, a Corsair powered by a P&W R-4360. He qualified at a little over 380 mph. 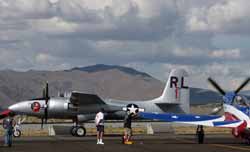 Rod Lewis in his Tigercat, Race 1 on the way back from running the course for a while. He is making his way by Miss America, Race 11 as it starts up. 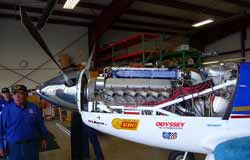 John Parker and the working end of his Thunder Mustang, Blue Thunder II, Race 352. that is a Falconer V-12 up front making all the noise.

In the Formula One pits we found Endeavor, Race 11. I guess all the tile helps you find that nut you dropped that always seems to roll as far away as it can.

The working end of a Formula One racer – Continental O-200 engine and prop extension. This is “Scarlet Screamer,” race 50. 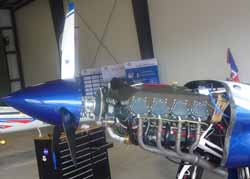 Adding a few more cylinders of a slightly larger size gets you a Continental IO-720. This is installed on the front of Kevin Eldridge’s Nemesis NXT “Relentless,” race 42. If you’re interested, the plane is for sale on eBay right now and will be sold Sunday night. A bare carbon composite NXT body was in the back of the hanger – Kevin’s new project. 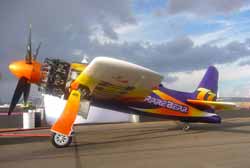 And we wouldn’t be complete without at least one photo of the home town favorite, Rare Bear, race 77 – this year being flown by Steward Dawson.