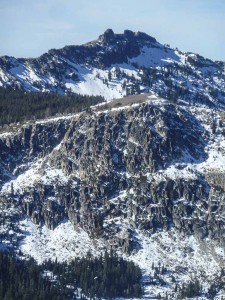 One of the peaks near Donner Pass.

I took advantage of the good weather again this weekend to get another of those $200 omelets. This time I decided to fly ‘over the hill’ to Auburn, CA (KAUN). The Auburn airport is in the foothills just to the northeast of Sacramento at an elevation of 1539′ MSL, a bit over 3500′ below Stead’s field elevation.

That sounds like a nice downhill flight, but between Stead and Auburn there is a hill with a pass known for the Donner Party. The sectional lists the elevation of the pass at just under 7100′ MSL with peaks on either side rising to about 9000′ MSL. Interstate 80 runs through the pass, so it’s an easy IFR ( I Follow Roads ) route to follow.

As long as the winds are light and variable I am willing to go through the pass at about 9000′. Anything more than a light breeze and I go up to 10-12,000′. Searching the Internet for Donner Pass weather will give you a non-aviation look at the weather in the pass at highway level. The closest airports to the pass are Truckee, CA (KTRK) on the west side down in a valley and Blue Canyon Nyack (KBLU) about 16 NM to the west at 5300′.

There was hardly any wind at all, so for my breakfast run I flew through the pass at about 900o westbound and 9500′ eastbound. Yes, 9000′ is not a VFR altitude for a westbound flight but you also need to remember that 9000′ MSL is well below the 3000′ AGL specified in Sec. 91.159.  The MEF in the sectional quadrant where you find Donner Pass is depicted as 9600′. I made sure to use see-and-avoid and flew on the right side of Interstate 80, sort of an unwritten rule when following major highways, especially through confined spaces like a pass – this mimics what you would do in a car and it allows you to keep the highway in sight on the left side of the plane.

The flights both ways were really enjoyable. The Auburn Airport was busy as would be expected with the weather so nice. I managed to arrive in the traffic pattern during a lull in the action between the breakfast departures and the lunch arrivals. A Piper landed as I was entering the pattern and a Highway Patrol plane was flying along the highway but no other traffic was in sight. I found an empty transient parking slot, secured the plane and headed for the Wings Cafe. It was definitely t-shirt weather in the lower elevations. All of the outside tables with nice views of the aircraft ramp were taken so I was relegated to sitting inside. There are plenty of large windows that let you watch the action, but eating at an outside table in late January would have been a nice experience.

After breakfast I wandered the ramp a bit. There is a pilot shop on the airport, but it was closed. The sign said they were operating under “Winter” hours – undeterred by the clear skies, temperatures in the mid 60s and undoubtedly losing business. By that time there were no transient aircraft parking spots on the restaurant end of the ramp. Most of the planes on the ramp were as you would see at any active general aviation airport. One transient that came in caught my eye – a Van’s RV-7 with a nice-looking 4-bladed Sensenich prop.

The weather people up here in Reno are saying we will get our first chance of rain/snow tonight and then an even better chance Wed/Thur this week. We really need it so I hope their guesses are correct. We have been experiencing great flying weather lately, but it is setting us up for a nasty fire season if we don’t get some rain/snow pretty soon.

A Stretch of Bad Weather