A Stretch of Bad Weather 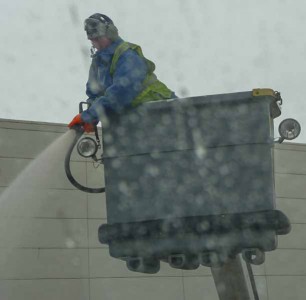 De-icing – a cold, miserable job.
Thank these people whenever you get the chance.

I haven’t had the plane out of the hanger for almost two weeks now and it looks like the non-flying stretch is going to last a bit longer.  Last weekend our winter finally came back. There was a little precipitation but, more relevant to an aircraft without a heater,  the temperatures dropped about 20 degrees (F) for the daily highs – barely reaching 40 late in the afternoon. Yeah, I know, compared to what is happening in the central and eastern part of the country 40 degrees is a heat wave.

This weekend the weather wonders are saying there is a 50-60 percent chance of rain/snow… and more wind. Around here they don’t put out a percentage that high unless it’s actually raining at the time. Such is forecasting in the mountains – way too many variables.

Last week the local FAASTeam representatives put on what they call a CFI Open Forum. The FAA used to sponsor CFI workshops that, over a period of time with consistent participation, could qualify for a CFI renewal. They ended that program and the local office picked up with these Open Forums events. It’s a way to get a little more information out to the local CFI community and a chance for the CFIs and DPEs to get together and talk about the latest ‘problem areas’ that are showing up in certificate check rides.

The primary topic for this Forum event was Preventing Loss of Control Accidents. There has been a string of accidents in the Reno-Tahoe area over the past 12 months that has attracted the attention of the FAA Safety people.  When you live up here in the mountains it is easy to attribute accident causes to inexperienced mountain flyers – flat-land pilots flying up to mountain destinations for a weekend or to visit friends and then disregarding the tremendous differences in aircraft performance and weather phenomena between the two locations. In this case though, only about half of the accidents involved pilots from out of the area.

One factor that appeared in multiple accidents was an ignorance or disregard for density altitude. This FAA document discusses density Altitude in fairly clear terms and includes a Koch Chart that can be used to determine the effect of density altitude on typical non-turbocharged aircraft performance. You enter the chart with the OAT and the airport Pressure Altitude. It’s more for reference than specific number – that’s where your individual aircraft performance handbook needs to be referenced. If you use the Koch Chart and enter with 80 degrees and a Pressure Altitude of 5000′ the chart says to increase your normal takeoff distance by about 130% and to decrease your rate of climb by almost 65%.  Most general aviation runways will have enough pavement to handle the added distance necessary to lift off (though I would use 200% to account for my technique, engine condition and aircraft rigging). The question then becomes what you do after you get into the air.

In most cases ‘climb on course’ is not an option.  The safest option for a VFR pilot (especially at night) is to fly the airport traffic pattern rectangle in a climb until you are well above the mountains/obstacles that you have to cross. In our minds we know that mountains do not move – but they sure look like they are growing if you are flying toward them. Instrument pilots are familiar with ODPs (Obstacle Departure Procedures).

Most major airports have charted departure procedures that combine obstacle clearance with integration of the flight into the air traffic control system but small airports can have them, too. The Instrument Approach Procedures Chart has a section on Takeoff Minimums and (Obstacle) Departure Procedures. Each airport listed has a section for IFR minimum weather conditions for takeoff and a section that describe in text the Departure Procedure for each runway. As a VFR pilot, what do you care?  Well, the procedure described will keep you clear of terrain/obstacles no matter what the weather might be.  You know that the procedure listed will keep you clear of terrain. If you have any questions in your mind about what your options are for climbing out of a mountainous area, check the published Departure Procedure and see what is shown.

For instance, at Reno-Stead taking off on runway 26 the procedure says to use a climbing right turn to head 050 degrees and intercept the FMG 314 deg radial and proceed inboud to the FMG VORTAC. Then climb in the holding pattern at the VORTAC and describes the holding pattern. Then is says to depart the VORTAC at or above specific altitudes (from 10,000′ to 12000′) for different directions of flight. If you are VFR just call up (NORCAL) Approach Control and tell them what you want to do. There is no reason not to call them and get flight following out of the mountains anyway.

That was another topic of discussion – flight following, flight plans and personal tracking devices. One of the accidents described was survivable. Two of the three airplane occupants lived through the crash but died before the aircraft was found. No flight following was used, though I believe a flight plan was filed. It just took too long (measured in days) for the route of flight to be traced, the location determined and the rescuers to arrive. One Forum attendee recommended always carrying a 406 MHz PLB (Personal Locator Beacon). I don’t have one of those, but I do use a SPOT Satellite Messenger. It is set up to record my location on a map every 5 minutes. The map is available at any time to my specified list of individuals. The unit also has the ability to sent an “I’m OK’ message or a ‘911 –  I need help’ message. So far the 5-minute interval seems to be sufficient. For an additional subscription fee I can decrease that to every 2 1/2 minutes.

As with most accidents we read about, every one could have a different outcome had the pilot in command made at just one different decision.

Past Time for an Update