I actually got the Swift out of the hangar and into the air this weekend. The 2011 Golden West Fly-in was going on in Marysville, CA (KMYV). I flew ‘over the hill’ with a friend who was flying his RV-6A – well, we were going at the same time, but took slightly different routes and never saw each other until we were on the ground at the show.

Two other Swifts made it to the event added to the one based there, so considering the number made we had a good showing.

The winds started to pick up a bit as the morning progressed and my RV friend decided to head back over the hill before they exceeded is personal limits. Reno-Stead is not particularly known for it’s calm winds. I was comfortable with the crosswind component and elected to stay for the day. By the time I got home the winds at Stead were 40 degrees off the runway heading at 15G25.  Not a fun flight in the mountains – definitely whitecaps in the coffee cup.

The Golden West Fly-in is a fairly quiet event. They appeared to have a good turnout of spectators wandering around, but the aircraft participation seemed a little light. The economy is hitting everybody.

I took photos of the planes that looked interesting to me and I’ll  include them below with a little explanation of each. Enjoy.

When I first glanced at this plane I though – Republic Seabee – but as I walked up to it and got a partial side view I saw that it most definitely wasn’t a Seabee. The lettering on the side says Siai-Marchetti Riviera.

Hmmm. Got me there, a plane I hadn’t seen before. Interestingly, the best source of information that I found for the Riviera is on the Seabee website.

Another source had the following information – and of course there’s always Wikipedia:

The Nardi FN.333 Riviera, later the SIAI-Marchetti FN.333 Riviera, is an Italian luxury touring amphibian flying-boat designed and developed by Fratelli Nardi in the 1950s and produced in small numbers by Savoia-Marchetti during the following decade. 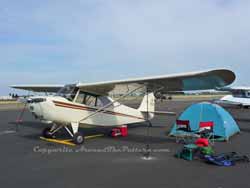 It’s not that an Aeronca Champ is an unusual airplane, it’s just that it’s so much fun to fly. You don’t get anywhere in a hurry and you usually don’t fly very high. But it’s the journey and the fun you can have at the destination that make it all worth while.

This is a really clean Sonex on display in the judging area. You can find out more about this LSA-qualified amateur-built aircraft at the Sonex Aircraft website.

The paint scheme on this one caught my eye. It is the Extra 300S of Vicky Benzing, one of the aerobatic performers in the Golden West airshow. The announcer said that she would also be racing this plane at Reno this year.

The Commemorative Air Force brought their B-17 and their B-25 to Marysville this year. They said that the B-17 was due a 25-hour check. Here you can see their mechanics doing a compression check on one of the cylinders. 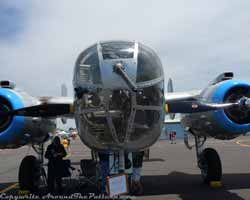 Here is a nose view of the B-25 that the Commemorative Air Force  brought to the Golden West Fly-in. 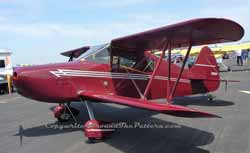 This caught my eye because of the negative stagger of the wings – like the Beechcraft Staggerwing biplane. The owner, Brad Poling, showed his sense of humor by filling out the prop card identifying the aircraft as a ‘Beachcraft Model 19’ and called it a ‘prototype proof of concept aircraft, one of a kind that was never certified.’  In reality it is an amateur-built Westfall biplane. 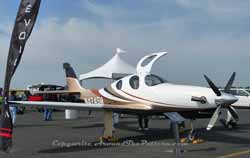 For those fire-breathing aficionados out there, Lancair had a small display with their turbine-powered Evolution. There were usually a couple of people inside looking around at what could be if they won the lottery… 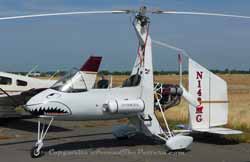 And for those of you who like to see the wings move – this Predator Gyrocopter was parked down the row from me. It’s powered by a 150 HP  O-320 Lycoming.

On a sad note – just as I was to publish this I saw a message go by on Twitter about a B-17 crash near Aurora, IL. Apparently the plane had been at the Aurora Municipal Airport giving rides for a week and on departure had an engine fire. They put it down in a field and the plane burned. One of the seven crew members sustained a minor injury. The plane was ‘Liberty Belle’ of the Liberty Foundation. A good article covering the accident is here. It sounds like they did a really good job putting it into the field. I hate to hear of the loss of one of these historic aircraft – it won’t be long until the costs involved with operating them are too great for even a non-profit foundation to keep them flying. Then only the small numbers of us near museums will be able to see them.

And, as usual, the media didn’t get a whole lot correct with the B-17 story. Here is what actually happened, as described by the Chief Pilot of the Liberty Foundation on their website.