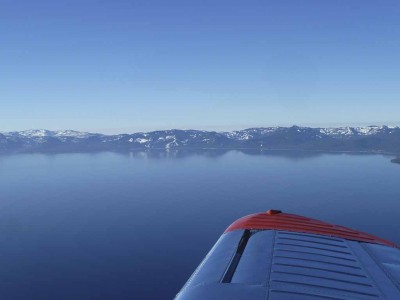 I finally made it back into the air this weekend. The weather had been beautiful all week and Saturday was no exception. It hasn’t been much fun for the ski areas and the newcasters have run segments on our extreme drought conditions, but the flying weather has been great. Well, last Saturday wasn’t too good unless you really wanted some wind practice. At one point I saw winds of 30G47 knots at Stead. It was right down the runway so landings would be possible but probably not fun. The hard part would be getting off of the runway – making that 90-degree turn onto the taxiway. Definitely not fun.

I had flown enough since I last bought fuel to be down to just the main tank  so I headed south to Minden (KMEV) for breakfast and their self-serve fuel island. I still had 2 hours of fuel on board but that restricts the places I can comfortably fly to from Stead and return.  It was a beautiful flight with calm winds, even over Lake Tahoe.

I entered the traffic pattern joining an LSA pilot who was practicing landings. My timing placed me on mid-field downwind as he was lifting off from his touch-and-go. I was down and had cleared the runway by the time he called his base leg turn.

I pushed the plane away from the fuel island, chocked it, closed it up and walked down the ramp to the Taildragger Cafe. There were no tables available, so I sat at the end of the bar and had breakfast there. One end of the bar has Blackjack gambling screens embedded in the counter (remember, I’m in Nevada) while the other end is flat and suitable for serving food. A large portion of the tables were arranged in a U shape for an expected group of people. When I left Stead I saw that the local Search and Rescue group was amassing for a training flight or whatever they do. Based upon past experience I would imagine it is a good excuse to all log a bit of training and to fly out for breakfast.

Since I had arrived before the crowd I managed to get back in the air ahead of the group. I decided to head straight back to Stead by crossing through the Reno Class C airspace. I called NORCAL Approach when I was abeam Carson City and got a squawk code and was cleared direct on course. It always bothers me that I have to call California to fly over Reno. In one of their consolidation operations the FAA moved Approach Control for the Reno-Tahoe area to Sacramento with remote radar/radio outlets in the Reno area valleys. NORCAL controls traffic at 6500′ and above in the area which is about as low as you want to fly through the valley VFR. The Reno-Tahoe Airport (KRNO) is at 4400′ MSL but Mt Rose, 11 NM southwest of the airport, rises up to almost 11,000′ and Peavine Mountain, 9 NM to the NW, is listed at just under 8300′ MSL. The east side of the valley tops out at 7500′-8500′. Nope, definitely not in Kansas anymore.

AOPA conducted one of their safety seminars in Reno last week. They are held in one of the conference rooms at the Atlantis Casino/Resort. It seems that the Reno venue regularly gets the first presentation of a new seminar. I’m not sure why it works out that way. This seminar’s topic was the new Accident Case Study: Live. Three accidents were covered in detail progressing through the entire scenario with NTSB findings brought into the discussion at the appropriate times. The first accident that was discussed involved a real estate broker from Truckee, CA, although the accident occurred in southern California. The group seemed to take more interest in the details of that one, probably because of the connection to our area. Another of the accidents covered was written up in the latest issue of EAA’s Sport Aviation Magazine (Jan 2014, p. 78), though the live seminar covered it in more detail.

If you get the chance I would recommend attending the seminar. It is always a good exercise to see how easily you could find yourself in similar circumstances and hope that you would make different decisions at the right times in the sequence of events.

A Weekend on the Ground