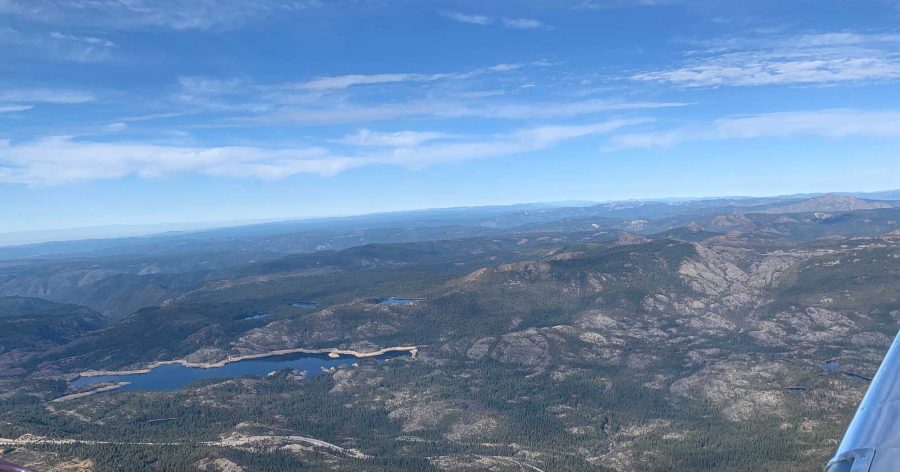 The weather forecasters were saying that this past weekend was going to be great weather but a cold front was on the way and scheduled to arrive by Tuesday. Apparently several other people thought the same as I and decided to get into the air before the weather changed.

On Saturday I thought I’d spend some time in the traffic pattern practicing landings. Good idea but I wasn’t the only one who had it. I took off and stayed in the pattern but by my third time around I had been joined by four other planes or varying types speeds.

Stead (KRTS) is a very nice, large non-towered airport but 5 planes in the pattern was my limit so I quit, stopped off at the fuel pumps to top off my tanks and put the plane away.

Sunday’s weather was just as nice. While the pre-heater was blowing hot air into the cowling I flight planned for a trip to Auburn, CA (KAUN). There is a nice restaurant on the airport that I hadn’t been to since I drove down to take my IA written exam. Using Foreflight I filed VFR flight plans for both directions with estimates on departure times.

I did a good preflight, pulled the plane out and headed for the runway. Two other planes were at the east end of the airport – one for runway 26 (a Kitfox) and one for runway 32 (an L-39 Albatross).

Once everyone was clear I took off and headed toward Truckee to go over the Sierras at Donner Pass. The weather was beautiful. Maybe a little haze but no bumps at all, even through the pass – I went through/over it at 10,500 MSL.

The valley with the Truckee Airport was still a bit hazy. Earlier in the morning their weather had been 300′ overcast and 1/4 mi visibility with freezing fog.

Over Donner Pass I got a good look at the Boreal Ski area – it looks like they have been making their own snow for a while and using one of their runs. This week the top of the passes are supposed to get two feet or more of new snow and daytime temperatures in the Reno area will be lucky to get out of the 30s.

As I taxiied to parking at Auburn I noticed another Swift on the ground parked by the restaurant – and not just any Swift. It was the ‘sister ship’ to mine – not serial number wise but the only other Swift currently flying with a 3-bladed prop. The owner bases the plane at the Lincoln, CA (KLHM) airport so we run into each other occasionally but it has never been a planned event. He and a friend had flown up for breakfast and were just on their way home. Good to see him again and hear that the plane is still operating well.

After they left I got a seat at an outdoor table to watch the airplanes and enjoyed a great, huge omelet.

The flight home was equally smooth and enjoyable – there was some light chop going through the pass again, this time at 9500′ but nothing really uncomfortable. I fit myself into the traffic pattern with three other planes, made a full stop landing, topped off the fuel tanks again and put the plane away for who knows how long.

It was really nice to get out and fly again after a couple of weeks off and the flight to Auburn worked out great – including taxi time it was 1.1 hours down and 1.4 hours back. Hopefully I won’t have to wait until Spring to get back into the air. Sounds like we may have a string of storms with short breaks between them. Good news for the skiers but not so great for the flyers.

Finishing Out the Flying Year