It used to be that you could call it a $10 hamburger. Oh how times have changed. The local avgas rate has gone down lately, but we’re still not back to the “good old days.”  My logbook says that I paid $5.08/gallon for the 100LL  in late September and when I filled up a couple of days ago the price had rolled back to $3.55/gallon. Small pleasures.

The day had dawned clear and calm and the forecast was for it to stay that way, but the weather people were saying that in a couple of days there would be a major shift in our weather pattern – winter was on the way. I decided to take advantage of  the late fall weather and drove out to the airport, opened up the hangar and turned on the engine pre-heater. The outside air temperature was in the low 40s and was supposed to rise to the low 50s, but it had been down in the 30s overnight, so the engine was cold-soaked. I have a small ceramic heater to which I have attached an insulated duct that I run up into the engine compartment from below. It’s not a strong heater, but it has it’s own built-in fan and works fairly well. I usually leave it on for an hour or two as I work around the hangar doing the usual pilot stuff, like the preflight inspection. It also gives me time to check that I have everything I want in the plane for the flight – a mountain survival kit, small stash of tools, chocks, extra parka, and working batteries for the portable gps and comm radio. Then I usually walk across the taxiway to see what is going on in my friend Dave’s hangar. I’ve mentioned Dave before, he’s the one who builds hotrods. There are always at least two or three cars under construction in his (heated) hangar.

Dave asked if I was going to be around for lunch and I mentioned my planned flight. He asked if he could go along. Now, Dave is not an airplane person. He had gone up with me once in my previous Swift, but had not yet been flying in the one I have now. Of course, I said yes, but warned him that the plane did not yet have either an interior or a cabin heater. He was unfazed, so I headed back to my hangar and finished up the predeparture chores. I also took the time to call our destination airport to make sure the weather was good there. They do not have weather reporting and none of the airports near there give a true indication of the weather at this airport. I checked Duats weather for the entire area a couple of weeks ago for a flight there and everyplace was clear and calm, but when I got about 3/4 of the way there I could see that the valley where the airport was located, and only that valley, was socked in tight with low clouds. Now I call ahead for an unofficial weather report from the airport secretary. That accomplished with positive results, I pulled the plane out onto the taxiway and locked up the hangar. Dave was at a point in his project where he could take a break, so we loaded ourselves into the cockpit and got comfortable. I went through my standard emergency briefing, started up and headed for the runway and our flight to 2O1, Gansner Field Airport in Quincy, CA. I have mentioned Quincy in a  previous post as being one of my favorite destinations for breakfast or lunch. 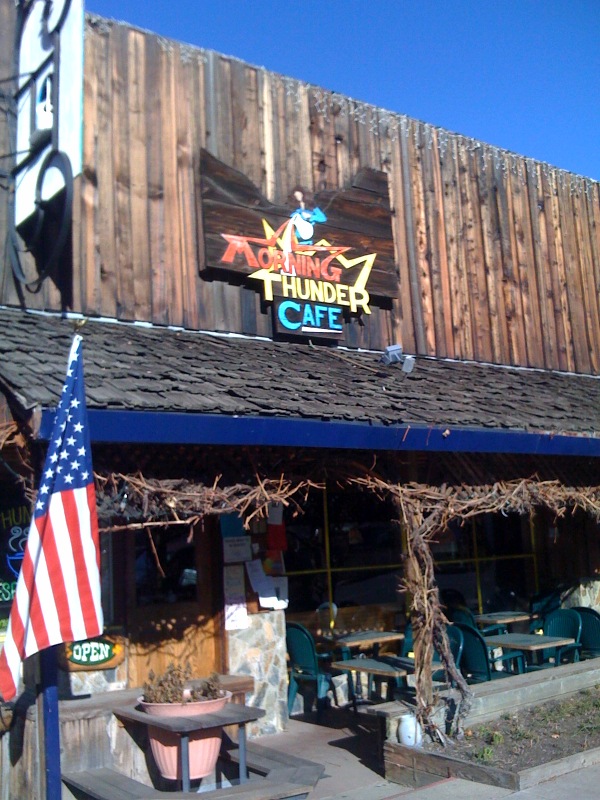 I climbed to 8,000′ to make sure it was a smooth ride for my non-flier and found that we happened to be just above a thin smoke layer. The early morning cold temperatures had convinced several people in the area to start fires in their wood-burning fireplaces which generated a layer of smoke at the top of a temperature inversion. At 8000′ the temperature was  5 degrees above what we had on the ground before takeoff. The flight was very enjoyable and there was no traffic at all in the Quincy area for our landing – the benefits of flying on a weekday.

We had a nice lunch at the Morning Thunder Cafe and started our walk back to the airport. On the way we passed a warehouse-type building where Dave said he knew the owner, so we stopped in to say hi. It turned out that the owner wasn’t in town, but another employee gave us a tour of the facility. The company has several contracts with the military to refurbish aviation equipment. That day they were in the process of refurbishing an aircraft start cart. This one was powered by a small jet engine and provided both electrical and pneumatic power. Our tour guide said that this particular model goes for about $300,000. As a taxpayer I appreciate that they’re having it rebuilt rather than just buying a new one.  The company also does a lot of work on P-3 Orion aircraft equipment for the Navy and was  working on obtaining a contract with the Air Force to refurbish some engine change stands. The bottom line is that accomplishing the paperwork associated with the contracts is a usually a bigger and more frustrating job than the actual overhauls. We thanked our guide for the tour and made our way back  to the airport. 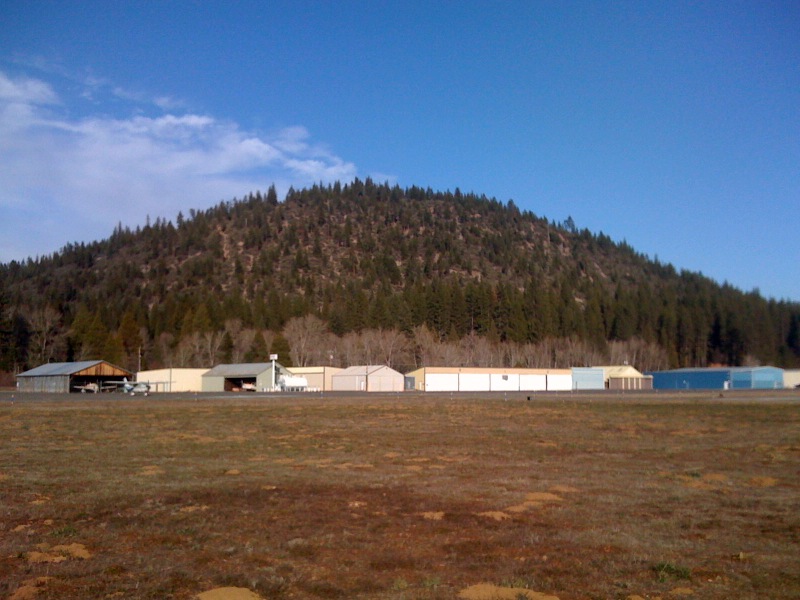 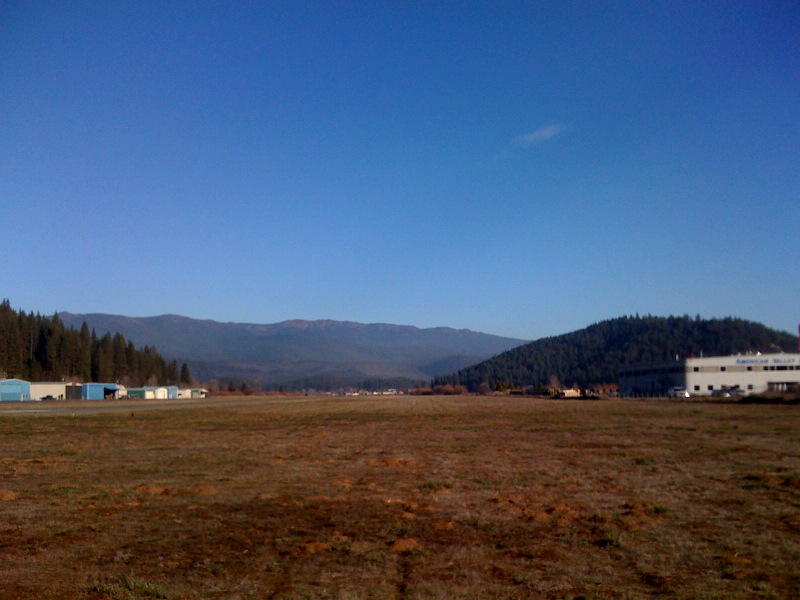 This time I got out my camera phone and snapped a couple of pictures. The first one is taken looking north across the west end of the runway. Yes, the hill behind the hangars is as close as it looks. Downwind for landing to the west is over the top of the hill. The second shot is looking east and shows the other hill that impacts airport traffic patterns, specifically the departures. Standard operation is to land to the west and take off to the east.

I stayed low on the flight back since it was still relatively calm and smooth even at 6500′ which is below the tops of several of the ridges. We followed a valley back toward home and enjoyed the view. After one of my better landings (thank-you, landing genie!),  I dropped Dave off at his hangar and took the plane down to the opposite end of the airport for a visit to the fuel island. I topped off all the tanks, took the plane back to the hangar and put it away. That involved cleaning all the windows, checking the oil level and covering the plane with sheets (to try and keep most of the dust off the plane) and repositioning my homemade engine heater for use the next time. The weather reports said snow was on the way, so I figured that might be my last flying for this period at home. Time will tell on that score. [Three days later  it has been snowing steadily for the past four hours and the temperature hasn’t been above 34 degrees.] 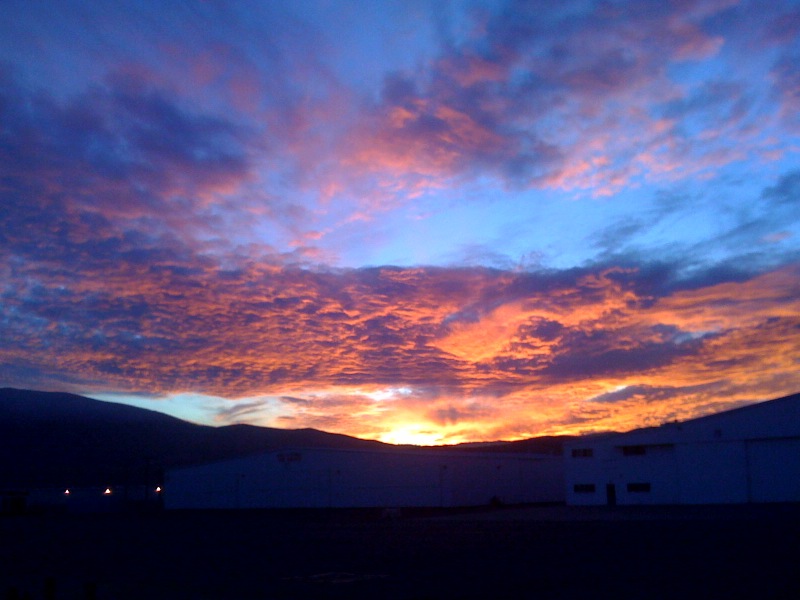 The short winter day found me leaving the airport driving off into the sunset, a great finish to a really nice flying day. I took this as I was about to turn toward the airport exit and head into the ‘other world.’