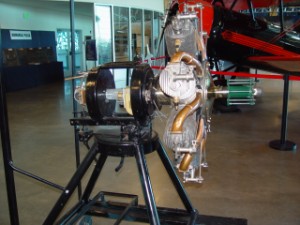 There are several other engine and aircraft exhibits in the main hall. Three more engine displays caught my eye. These first two were both used in the Curtiss Jenny. 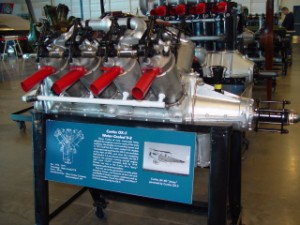 There was a Jenny in the National Aviation Heritage Invitational (NAHI) at Reno in 2006, so I spent a little time looking at the engines that had been used to power the plane. The JN-4D Jenny was equipped with the Curtiss OX-5 engine, shown here. The OX-5 was first manufactured in 1915 and has quite a cult following and it’s own organization called the OX-5 Aviation Pioneers. It is a very maintenance-intensive engine due to it’s design, but it develops it’s rated horsepower (90 hp) at only 1400 RPM. This allowed the use of large efficient propellers.

The other Jenny engine on display is the Hispano-Suiza that powered the JN-4H model, 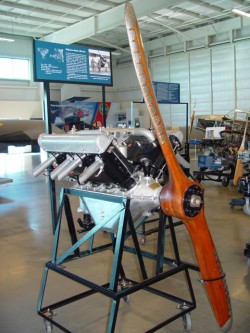 commonly referred to at the “Hisso” Jenny. There are currently only two JN-4H Jennys flying in the world, one being the aircraft that won the overall trophy at the NAHI competition. The early version of the engine produced 140 HP at 1900 RPM while later variations produced as much as 300 HP. It is sometimes referred to as the “Rolls-Royce Merlin of World War I.”  It came into production around 1915 just when the rotary engines of the time were reaching their limit of horsepower output. Increases in cylinder size on the rotary engines to produce more horsepower would have resulted in unacceptable amounts of torque due to the rotational mass of the larger cylinders. The water-cooled V-8 engines came into being and provided a more efficient, lighter engine capable of further refinements to increase horsepower. The Hispano-Suiza engines used a cast steel block and aluminum heads, reducing engine weight by as much as 50% over the rotary competition. The larger horsepower versions were used on some WW I fighters such as the Spad. Some were manufactured with hollow crankshafts which allowed a cannon to be fired through the propeller boss, avoiding the synchronization problem of firing through the propeller arc.

The last of the reciprocating engine displays that I took note of was this cut-away display of the Pratt & Whitney R-4360 “Wasp Major” radial engine, sometimes referred to as the “corncob” engine. 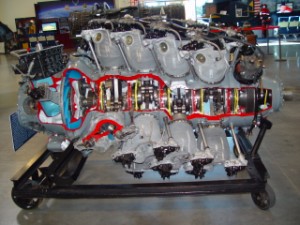 This engine was interesting to me for several reasons. It has four rows of seven cylinders, each offset slightly from the previous row.  Apparently if you were ham-fisted at starting this behemoth you could foul all 56 plugs. Can you imagine being sent out to clean and gap the plugs? It was used on Boeing’s model 377 Stratocruiser and C-97 Stratofreighter,  Convair’s B-36 and XC-99,  Fairchild’s C-119, Douglas’s C-124 and  Goodyear’s F-2G Corsair among others.  All models had four distributors, one for each row, that kept the plugs firing in the correct order. The later models had two turbochargers and a supercharger and generated 4300 HP. These engines are now seen in Reno Air Race planes, notably Dreadnaught and September Fury, both previous Unlimited Gold winners. The commercial version of the engine had an overhaul time of about 600 hours and as you would expect, was very labor-intensive. I would not want to guess how long the overhaul interval would be when used in the race environment. 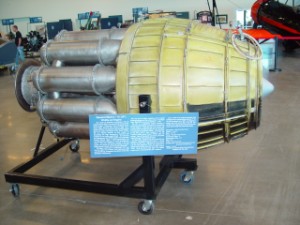 The last engine I wanted to show you is this unobtrusive model we found near the back of the room. It is on loan to this museum from the National Museum of the United States Air Force at Wright-Patterson AFB in Dayton, OH. Air Commodore Sir Frank Whittle is considered one of the fathers of the jet engine. The engine shown here is an outgrowth of Whittle’s original model W-1 which was flown for the first time in a Gloster Pioneer on May 15, 1941. In mid-1942, Whittle was sent to the United States to work with engine designers for General Electric. The outcome was this W.2B engine design which was installed in the Bell XP-59A Airacomet and flew in the autumn of 1942. At the same time that Whittle was working in England to develop the jet engine, Dr. Hans von Ohain was working on his jet engine design in Germany. One of my assignments in the USAF was as an aeronautical engineer at Wright-Patterson AFB (1975-1980). At that time Dr. von Ohain was the Chief Scientist at the Air Force Propulsion Laboratory at Wright-Patterson. I had the pleasure and honor to have lunch with Dr. von Ohain and talked to him about his design experiences and problems. Dr. von Ohain said that, in his opinion,  one of the biggest factors in Germany flying a jet-powered aircraft before the Allies was that he was working with an airframe manufacturer to develop a new aircraft while Whittle was working with engine manufacturers to design a new engine. The airframe manufacturer, Heinkel, had more incentive to push the project forward and have a new aircraft design flying than did the British engine manufacturers who would then need to sell this new propulsion idea to an aircraft manufacturer to have it installed in an aircraft. The first German engine flew in the Heinkel HE178 on August 27, 1939, almost two full years ahead of the British design.

From there we moved outside to see the aircraft on display. The museum has  large selection of aircraft, generally in good shape, however  you can see that the weather and sunlight are starting to take a toll on the finishes and furnishings inside the closed canopies. They have the full complement of  Century Series aircraft including the F- 100, 101, 102, 104, 105 and 106. There also examples of the A-10, T-6, T-28, and T-33 as well as the F-4, A-1 and CH-53 “Jolly Green.” On the large aircraft side are the EC-121D, C-54D, C-47, C-119G and HU-16B “Albatross.” This is just a partial list of the collection on display. Here are a few photos from the collection. 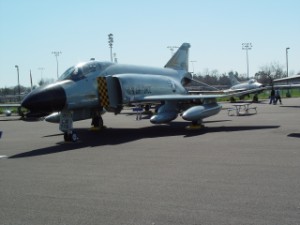 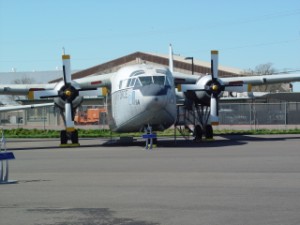 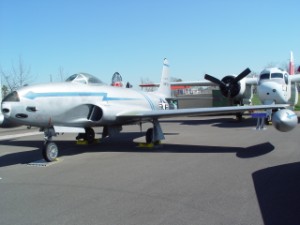 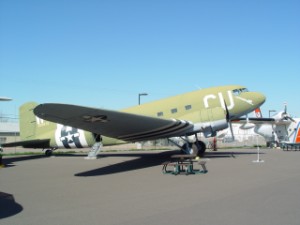 The museum’s C-53 Skytrooper was open so that we could walk up inside the aircraft and see the cockpit and fuselage furnishings. The C-53 is the military version of the DC-3 that was used for carrying troops. It differs from the C-47 in that it does not have the large side door or a reinforced floor. The fuselage was outfitted with “seats” along each sidewall. 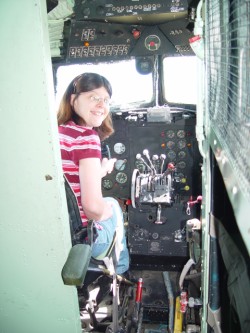 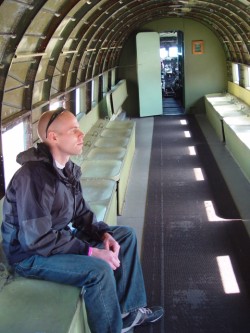 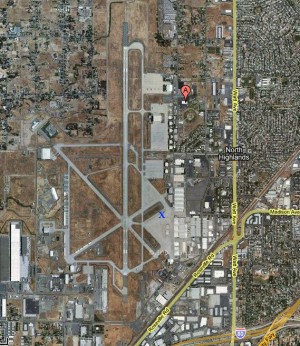 The Aerospace Museum of California is located at 3200 Freedom Park  Drive,  Sacramento, CA  95652.  At the time of this article, they are open 7 days a week excluding the major holidays. Their hours of operation are Mon-Sat 9 am to 5 pm and Sun 10 am to 5 pm. You can find more information about the museum at the Aerospace Museum of California web site or you can call ahead at (916) 643-3192. It is possible to fly into McClellan Airport and visit the museum. My Flight Guide shows McClellan Jet Services located at the ramp with the blue “X” in the photo. The blue mark is where there are some general aviation aircraft parked on the ramp. The “A” is the location of the Museum. The information in the Flight Guide says the museum is 1.25 miles from the Jet Services facility and notes that a courtesy car is available. I have not landed at MCC, so I am not familiar with the facilities or the logistics of getting to the museum building, but I highly recommend a visit.