I’m in the middle of a layover in Shanghai and finally have time to work on another post for you. I have had several layovers here and have progressed past the point of feeling like I need to go out and find something to buy. Wandering the shopping areas here is what I call “combat shopping”. As you walk along the side streets or through the well known tourist shopping areas the shop workers yell out their wares and will occasionally grab you by the arm to lead you into their shop. I know of one pilot who had a special t-shirt made for his layovers here. It said on the front and back, in Mandarin, “I do not want a t-shirt, I do not want a watch, I do not want a DVD.” plus a few other things. It’s not my idea of a fun time, but I’m not much of a shopaholic. I thought you might be interested in seeing what it took to get here. The flight to Shanghai from the U.S., door closed to door open, was right at 14 hours and took us as far as 80 degrees north latitude. Routes that take us that far north are called Polar Routes for obvious reasons. This is a FlightAware plot that my wife sent to me showing most of the first half of the flight. The U.S. areas are obvious and the land areas are outlined in light blue.

After take-off we headed north and crossed over the western edge of Hudson Bay, continued north-northwest and eventually passed over the last of the North American continent between 75 and 78 degrees north latitude.

This is the Google Earth view of the navigation points that we passed over in that part of the world. Google makes it look fairly nice with all the water around the islands. This next photo, however, is what it looked like yesterday. 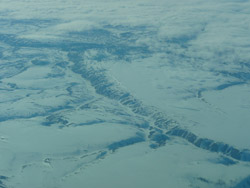 The instrument panel view was taken about the time I took the picture out the window. 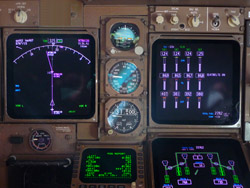 You can see from the navigation display that we had just passed 75N/110W and have 166nm to go until 78N/120W. It is the middle of June and there is no indication that the ice is breaking up or the ground is thawing.

So, why the title of this post? Way back when I went through pilot training, back before GPS or Loran navigation, we were required to draw a course line on a sectional chart, determine navigation points and then fill out a navigation log with distances, courses and headings between the points. (And we had to do this after walking 5 miles through the snow to get to school. 🙂 ) If you lay a

course plotter (like this one from Jeppesen) along the line between your navigation points and measure the course referenced to the meridians of longitude, you have determined the True Course between the points. In order to get the Magnetic Course you must then apply the local Variation. The variation is the degrees of difference between the magnetic north pole and the geographic north pole. The charts will have light-colored dashed lines (isogonic lines) showing the magnetic variation in each area. Now you have a Magnetic Course. The next correction you must make to your computations involve the errors associated with your heading instrument installation. For a magnetic or “whiskey” compass this is the correction that you find on the compass correction card. These errors are cause by the metal of the aircraft, the electronic equipment or the metal mass of the engine which cause the compass to deviate from a totally accurate heading. Applying the compass deviation to your Magnetic Course will give you the Compass Course to fly. This must then be modified to account for the winds along your course. Applying the wind correction will give you a Magnetic Heading to fly so that you will follow the course that you have plotted. Simple, right? How do you remember all that? Well, back before the term politically correct had been coined we used the phrase “True Virgins Make Dull Company”. True Course + Variation = Magnetic Course + Deviation = Compass Course. The process remains the same, but I imagine there is another phrase to use as a memory jogger by now.

Unfortunately, the magnetic part of this process falls apart when you get way up north. At the higher latitudes (above 70 degrees north) the isogonic lines are so close together that using a magnetic heading is almost impossible, especially at the speeds that jet transports are flying. In fact, by looking at the isogonic lines along our course, it appears that we flew over or very close to the magnetic north pole. For this reason, when we pass north of 70 degrees north we place the aircraft heading system into the “True Heading” mode. In the picture of the instrument panel you can see this at the top center of the navigation display with “TRU” in a white box. You can also see that the Heading Reference switch in the top right corner of the photo has been placed in True rather than Norm (Magnetic). We switched back to magnetic references when we flew south of 70 degrees north shortly after we entered Russian airspace.

The rest of our route had us crossing the northern coast of Russia at about 71.5N136E. From there we overflew Yakutsk, Russia, crossed over eastern Mongolia, over Beijing, China and descended into Shangahi for our landing.