Training is in My Future

As an airline pilot your life is ruled by seniority. 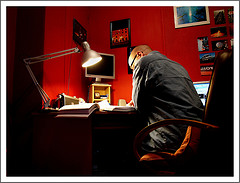 The day that you are hired by an airline you are given a seniority number.  From that time forward, your seniority number determines how you live your life – everything from what equipment that you fly to your pilot base location to when you get to take your vacation time.

There is a master seniority list for each airline that determines what options you have for bidding equipment, seat and base. After you have made your decision in those categories your monthly schedule and vacation bidding are determined by your seniority in that position.

For the past two years I have been bidding as a 747-400 copilot. Our airline only has one base for the 747, so that was predetermined. The bidding system we have is also set up so that your position can be as a schedule-holder, bidding for specific trips each month or as a reserve pilot, bidding for a set of days when you would be on call to fill in for a pilot who called in sick. Those are, or were,  two different positions you could bid as a 747 copilot.  Some people, usually those who lived close to their assigned base, were content to be on reserve. They could sit at home getting paid to be on call. The last time I checked there were 9 pilots senior to me who chose to bid a reserve position rather than bidding for specific trips each month.

We are now going through a merger with another airline, though from my vantage point I don’t see a whole lot of merging going on.  At any rate, the merging process has now changed how we bid our positions. There is now only one category of 747 copilot. The schedule-holder and reserve bid lists were merged into a single copilot list.That meant that I immediately dropped 9 positions since those senior guys on reserve were now on the single bid list with me. Each month the company decides how many people on the list of copilots that they want to be in a reserve status. I was really close to the bottom of the copilot seniority list when I was bidding as a schedule-holder.  Since the merging of the two bidding positions I have moved farther down the list.  the result is that I have found myself the past two months getting forced into a reserve position.

Another of the merger changes is a reserve status of  “long call.” Long Call means that you have to be available at your pilot base within 12 hours of being notified of a trip by the scheduler. Conversely, short call requires a 2-hour report time. The scheduler decides who is put on short call for the following day using some seemingly secret formula, all others on reserve duty that day are on long call status. Unfortunately the travel time from my home to my pilot base is at least 12 hours. The commute time forces me to sit at my base waiting for the call no matter what my report time status may be.

All this led me to the decision to bid off of the 747 and into a lesser paying position that would give me more seniority and allow me to bid specific trips rather than sit on call.   I was awarded a position as a copilot on the Airbus A-330. I tried to get a West Coast pilot base but ended up at the same base where I’m assigned now. Maybe on the next bid I can get a transfer to the easier commute, who knows.

According to the company website I am scheduled for training from November 1st through December 5th. That includes all the training necessary to be awarded a type certificate in the aircraft – ground school, simulator and operating experience. Guess I’d better brush up on my French…