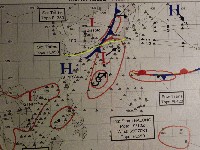 The second leg of our trip was a soggy night flight from Tokyo to Shanghai. Typhoon Halong was moving from it’s visit in the Philippines toward Japan. The outer edges of the storms were approaching our area and the clouds were building and turning darker as we rode the bus to the airport. After we finished our duties in the flight planning room, I hurried to the airplane, dropped off my bags, grabbed my flashlight and headed out to do the exterior inspection as soon as I could. As I walked around looking at all the usual suspects, I could feel a mist-like rain falling. I finished up my duties outside and returned to the cockpit flight deck to finish my preflight and get ready for the departure. Twenty minutes later it was raining so hard that it was difficult to see the end of the terminal. That quick turnaround to outside had been one if my better decisions.

Since we were fairly light on gas with only a 3:30 flight time, we climbed right up to FL380 for the first portion of the trip. The climb was in light to moderate rain and light to moderate turbulence until about FL300. We made good use of the onboard weather radar and the controllers were willing to give ‘deviations as necessary’ for weather avoidance. By the time we reached the western coast of Japan, we were in the clear and stayed that way for the remainder of the flight.

As you cross form Japanese to Chinese control, your assigned altitude changes from a flight level in feet to one in meters. So, you switch from setting 38,000′ in the altitude select window to setting 38,100′ which equates to 11,600 meters. Then you have to refer to enroute and approach charts to convert the assigned meter altitudes to equivalent feet for climbs and descents. Luckily this plane has a ‘meters button’ that adds an additional window on the altitude tape and shows the meter equivalent. It’s just a habit and a good crosscheck to look at the conversion chart as a backup. Just the first level of complexity added to a flight into China.

The second level has to do with the radio. English may be the established language for aviation, but the Chinese comply only as necessary. As you gain experience flying you consciously or unconsciously develop a three-dimensional picture of where other aircraft are in your area by listening to the controller give directions and altitude to the other pilots. TCAS displays add more information to the picture and confirm what you have probably already learned from the radio calls for aircraft within the display parameters. Unless you understand Chinese, however, you won’t have that ability when flying in Chinese airspace. The controllers will speak English to non-Chinese aircraft, but all other traffic is directed in Chinese. The ATIS broadcast is also given in both languages rather than just in English. It just takes longer for the information to come around again if you miss something the first time through the recording.

On the Jeppesen Tokyo, Japan H/L Area chart (p. 10-1) there is a circle around some brown-shaded terrain to the west-southwest of Tokyo. The note says that aircraft operating IFR must maintain FL160 (the transition altitude in Japan is 14,000 ft.) or higher for terrain clearance. Inside the darkest area of the circle is a dot and the notation Mt. Fuji, 12,388′. It’s sort of hard to miss.

Overall, the flights went well, the layover was enjoyable… the simple pleasures of a comfortable bed and a good air conditioner. The return flight went on schedule in clear skies on both ends, the typhoon having moved off to the northeast while we were out of town.

Tomorrow we head back to the US for a night. Three more long legs in this trip and then I head home.