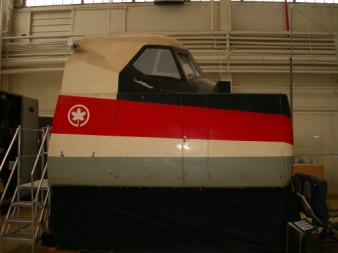 Since I was the one being evaluated I was to do all the flying. If I needed to brief an approach or accomplish a checklist I would transfer the aircraft controls over to the captain, do my briefing and then take control again. I could use the autopilot in whatever manner that I felt would help the most. We were going to do most of the maneuvers while flying out of an Asian airport we fly into routinely, so I was familiar with the available approaches.

The weather was set at non-precision approach minimums and off I went.  I was given vectors for the LOC approach landing to the south. Our airline flies VNAV non-precision approaches. The FMS generates a simulated glideslope from what we call a ‘key waypoint,’ very similar to the initial approach fix, down to the MDA at the missed approach point.  If there are intermediate level-offs between the key waypoint altitude and the MDA, the FMS tries to generate a continuous descent that meets all the restrictions. If it cannot, it levels off at the restriction until it can re-establish the descent to the next point or MDA.  I selected the specific approach and entered  it into the flight plan, determined our key waypoint, circled it on the map to remind me where it was and briefed the approach. When I was at the altitude restriction for the key waypoint and cleared for the approach, I selected LOC and placed the MDA+50’ into our altitude selector. The aircraft then intercepted the LOC course and, once past the key waypoint, automatically started to descend on it’s internally-generated glideslope. I monitored the raw data to make sure all was going well and as we got below the clouds and near the missed approach point disconnected the autopilot and made the landing manually.

When you fly internationally you must check and be familiar with the specific flight and approach procedures for the countries that you visit. Each country publishes their exceptions to the ICAO way of doing things. For instance, in the U.S. you must slow to less than 250 knots when flying below 10,000’ MSL. That means that if you are cruising AT 10,000’ you can still fly at 300 knots and be legal. However, in Japan the 250 knots restriction is AT OR BELOW 10,000’, so doing 300 knots at 10,000 feet will get you a violation.  Another change found quite often has to do with the aircraft’s descent below the MDA. In the U.S. when we reach the MDA and MAP and are not able to land, we execute a missed approach. It is acknowledged that if our descent planning has us reaching the MDA and MAP simultaneously (while still in a descent) we may descend below the MDA slightly while changing from a descent to a climb. Not all countries allow the descent below the MDA without the necessary cues to land. To account for the time to transition from a descent to the missed approach climb, we add the extra 50’ to the MDA when flying internationally. It probably wouldn’t be necessary if we used the ‘dive and drive’ method of flying a non-precision approach, but the VNAV method works so well you almost always reach the MDA and the MAP at the same time.

After the LOC approach I made another take-off, lost the right outboard engine and ended up going missed approach (engine-out) from a CAT I ILS approach. As we climbed out, I was again given the engine back and flew on vectors for a little while before I was advised that we had smoke and/or fumes in the cockpit. That required putting on the oxygen mask and smoke goggles, checking in on the intercom to make sure both pilots had operational systems and then starting to run the appropriate emergency checklist. As the captain proceeded through the checklist, I declared and emergency with the ‘controller’ and requested an immediate return to the airport. I was given an initial heading and then cleared for a visual approach.  Putting on the oxygen mask on is something we do quite often. When we are cruising above FL250 and one of us in the front seats gets up for any reason, the pilot remaining at the controls is required to put on the oxygen mask just in case there is a rapid decompression (RD) during the brief time that only one seat is occupied. The smoke goggles are another thing all together. They fit over your head after you put on the oxygen mask. The mask has a little valve near the bridge of your nose that you can open to blow oxygen directly into the goggles and evacuate any smoke that you have trapped in there. I wear glasses, which adds another layer of complexity. My routine usually goes something like this: remove glasses, put on mask, put on glasses, put on goggles, clear goggles, lift goggles, straighten glasses, reseal goggles, clear goggles. My glasses have the progressive lenses, so if they are not on straight the view is blurry. It would be REALLY nice if I never have to use the goggles in an actual emergency. I managed to complete the approach and landing and we simulated an evacuation of the aircraft, accomplishing the appropriate checklists.

The next take-off was made with gusty, strong winds and an ATIS that included the phrase WS +/- 10 kts blo 500’.  As anticipated, I received a windshear warning on departure. I accomplished the appropriate recovery procedure, made my PIREP and continued on the departure procedure. Not long after that a Traffic Alert (TA) appeared on the TCAS, followed a few seconds later by a TCAS Resolution Advisory (RA). The RA coordinates avoidance maneuvers between two TCAS-equipped aircraft, directing each aircraft in a maneuver which will most efficiently avoid the other aircraft.

Those two squares filled, we soon found ourselves at about 15,000’ in cruise. Now at a ‘safe’ altitude I was given a couple of scenarios to fly that tested my ability to recognize and recover from a stall. (Yes, we practice stalls in a 747-400.) From there, through the wonders of simulator flying,  we were positioned on a 10-mile final for runway 28R at KSFO. My instructions were to follow the glidepath down to 1000’ AGL then level off and turn right to aim directly at a mountain.  It was time to see if I knew the procedure for a GPWS terrain warning. Mission accomplished.

At this point, at I had completed all of the required maneuvers to the satisfaction of the instructor. The support pilot who had been working in the left seat than flew a few approaches for currency and we were finished for the day.

The last day of recurrent training is referred to as the LOE or Line-Oriented Evaluation. A check pilot (or two) observes the crew accomplishing a simulated line flight which includes a number of semi-typical malfunctions. Since this aircraft usually has a complement of two crews the LOE is normally conducted with four pilots. Support pilots (instructors) fill in the vacant positions if two full crews are not accomplishing recurrent training at the same time. In our case we had a captain and another first officer in training, for a crew of three. A second support captain was available, however this year’s scenario made his participation not necessary. This year the intent was to evaluate the first officer’s ability to lead the crew. Our airline currently augments long legs with a single captain and three first officers. All of the first officers hold a full type rating in the aircraft and are qualified to occupy the left seat at cruise. (It is a sore spot for some people, because the left seat occupant is accomplishing the duties and assuming the responsibilities of the captain while receiving first officer pay.) In actual operation, if anything major happens (an emergency checklist is accomplished, a situation requires a destination change, a passenger emergency occurs, etc.) the working crew will summon the captain back to the flight deck so that he/she can assume the command duties. In the captain’s absence, however, the person occupying the left seat must be willing and able to do or direct whatever is necessary to keep the flight safe.

This year’s LOE scenario was set up so that the captain would direct the flight until the aircraft reached cruise altitude, then he/she would simulate exiting the flight deck and would be relieved by one of the augmenting first officers. The captain would then be considered unavailable to make decisions that would require immediate action. I happened to be the augmenting first officer this time.

I won’t go into the specifics of the LOE scenario because there are still pilots who have not been through training yet and the exercise is supposed to be a ‘surprise’ with events happening in real time.  (We all know, however,  that if you are approaching the time to take your check ride for any rating you will seek out and quiz anyone who has recently been through the same course, no matter how many beers it takes.)  I’ll just say that there were several instances where the first officer’s ability to make decisions and to lead the crew could be evaluated. Emergency checklists were run, situations were discussed among the crew and with the dispatcher and maintenance control and diverts to nearby airports were accomplished.

When I look back on the flight I can see that there were several things that I could have done better (as usual) but we always found ourselves on the ground (or close to it) safe and sound.

Recurrent training is definitely a pain to go through, but you always come out of it with a better understanding of how the aircraft and crew work together to complete a flight safely.