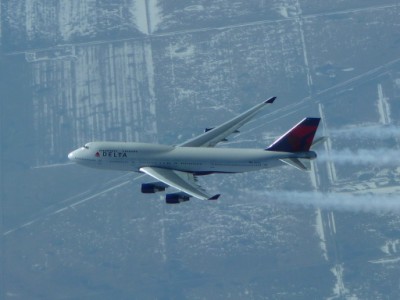 Some airlines use “Distance Learning” (DL) to accomplish a portion of the yearly training. Part of the annual requirement involves training in several subjects which can easily be accomplished with computer-based instruction and the learning evaluated with online tests. Our airline used this method at one time, but now requires the pilots to return to the training center. This results in a 4-day recurrent training session.  Here is a rundown of my first two days.

Day One of recurrent training

The first training day started at 2 pm and lasted until approximately 6 pm. The late start allows pilots who live a reasonable distance from the training center to arrive the morning of the first day. I’m not in that group, so I arrived the previous night. It gave me a little more time to settle in and to prepare for the fun times to come.

That first afternoon can only be described as mind-numbing. We sat at a computer and worked our way through training modules on carrying and handling dangerous goods, windshear, de-icing procedures, flying instrument approaches to closely-spaced parallel runways and of course, security procedures. Each module had a practice test after you had finished reading/reviewing the material. When all five of the modules had been completed your ability to retain the information was evaluated with a 30-question test covering all of the modules. The minimum passing score was 80% overall and 80% on each module. Day one complete.

The second day began at 9 am in a different computer-based training room. This one was set up to teach the mechanical systems of the aircraft.  Before the systems review began we were treated to a lecture on the use of the handcuffs that are supplied in the on-board medical kit. We watched an instructional video and then practiced putting them on each other.  They are sort of glorified nylon ty-wraps, used to immobilize the unruly passenger. This was followed by a short lecture on Threat and Error Management (TEM), the next iteration in the development of the Cockpit Resource Management training program. I’ll do my best to come up with an article on TEM in the next few days.

As I mentioned in my article DNIF, half of the aircraft’s systems are reviewed each year. The review is in the form of computer-based instruction. After the first two lectures of the day we were released to self-directed study of the systems training modules.  Day two also included our first simulator session, the SPOT.

The SPOT is a combination warm-up and an evaluation of what is called “first-look” items. First Look items are maneuvers to be flown without any pre-briefing before the flight. These are maneuvers which we may or may not routinely accomplish while flying on the line. It’s not really a no-notice evaluation though because the training manual outlining the recurrent training activities lists all the items that must be accomplished, which will receive a pre-flight procedures review and which are first-look items.  This year the SPOT maneuvers for this session were the an engine-out missed approach and either a CAT II or a CAT III instrument approach.

Since this was our first simulator session of the week, we were allowed to warm up a little before the stuff hit the fan. That meant that on the first take-off nothing failed. Simple pleasures. The weather was set at about a 600′ RVR. I made the take-off and, after reaching 6000’ on the departure, received vectors for the CAT III approach. The approach went fine, we made all the appropriate approach call-outs and we watched the aircraft land itself. So much for the fun part. We were positioned back at the approach end of the runway and I was cleared for take-off again with not much change in the weather. This time an engine failed at about 400′ AGL, shortly after we retracted the landing gear. Since the worst-case scenario is an outboard engine failure, that always seems to be the one that fails. This time it was engine number 1, the outboard engine on the left side engine. It took a second or two to get the hand-eye coordination going, but it all came together and we continued the climb to a safe altitude, leveled off,  accelerated enough to retract the flaps and then completed the appropriate checklists to secure our engine-shaped cargo on the left wing.  The weather had now improved to right at CAT I ILS minimums (amazing), so I briefed for that approach, eventually arrived on final and was cleared for landing. The autopilot will fly a very nice engine-out ILS but that was apparently not the intent of the session. The instructor was nice enough to give me an option – either hand-fly the approach or have the autopilot fail.  I figured I might like to have it later, so I turned the autopilot off and took over manually. The approach went fine and we were soon at minimums without a runway in sight. Off we went for that engine-out missed approach they wanted to see.

I worked my way up to about 1000′ AGL and was given a 40-degree right turn. The engine-out work was finished for the day. The engine miraculously started working again and the weather even cleared up. Must be because the wind blew all the clouds away. I was given a left turn and instructed to call the runway in sight. OK, I caught it out the captain’s window. Cleared for the visual approach was the response. The winds were 90-degrees off runway heading at 30 knots and this was to be another hand-flown approach. I let the autopilot find the approach course and establish an initial crab angle, then disconnected and did my best to stay on centerline while looking out the window across the cockpit. When the aircraft wingspan is a bit over 210′ (64m) you don’t do a whole lot of wing-low on landing. The approved solution is to crab into the wind to maintain runway centerline. Then as your raise the nose and flare for landing, use rudder to swing the nose to line up with the runway and use a slight amount of aileron to prevent sideslip. It would have been nice to have a video of the landing so I could see what I did to have the landing to work out as well as it did.

The instructor said to stop straight ahead and asked what I wanted to do next. I suggested perhaps lunch and he congratulated me on selecting the correct answer. Ninety minutes in the simulator had seemed like 15 minutes.

I stopped at the cafeteria, picked up a salad and sandwich and took them back to the classroom to continue my systems review on the computer. There were 5 or 6 pilots in our recurrent training class. We were split up into four crews and had been flying two different simulators in order to complete the SPOT training. By mid-afternoon we had all completed our simulator training and the systems review modules. Now it was time to show what we knew about the airplane by taking a 50-question test over this year’s systems. Again, we had to score at least 80% on each systems module and 80% overall.

It’s a typical computer-generated multiple-choice test. There are several hundred possible questions and the system picks 50 at random. Then it randomly shuffles the possible answers for each question so that even if two people get the same question on their test, the right answer will be different. It is a closed-book test with a time limit. The only reference material we are permitted to use are the life-sized photos of the instrument panels and controls that are in the classroom. I made it through the test and day two was complete.

Days three and four are simulator sessions. This post is getting a little long, so we’ll cover those sessions in the next post.