I’m out on the road again flying to the usual places. The plane I’m flying for this airline only goes to twelve different locations, so there isn’t too much variety in the flying. Once again, I was the junior member of the crew, so I drew the first break, as did Dan, the other pilot I am paired with this trip. I wasn’t really tired, so I started out in the bunk just reading, then managed a nap for about an hour and then read some more. I just finished the Darren Rowse/Chris Garrett book from ProBlogger. I highly recommend it for anyone involved in blogging or contemplating blogging (See link in right sidebar.). It got me thinking about what I can provide to you, the readers, that might be more beneficial than just a running commentary of my flights. In mulling over the challenge, it became obvious that the only things that will change from flight to flight, other than the occasional different destination, are the weather and the crew. You can only say so much about a cloud or how low the fog goes, but each individual is a totally new subject. I thought that it might be interesting to see how we all got to this position in our careers. It may give a reader a new idea for career advancement, or it could provide insight into what it takes (or doesn’t take) to be a professional pilot.

So, when I have the opportunity, I’ll try to give you a closer look at just who is flying in the front seats of these planes. I won’t always use real names and I may not use actual locations, but the stories will be true. I want to stay away from privacy concerns.

Dan has been with this airline for about 27 years, so far, and has been flying in the left seat of an international wide-body plane for the past six years. He grew up in the midwest U.S. and has always liked airplanes of one type or another. His father was a mechanic and armorer on B-17s in England during WWII, but was never a pilot. Nevertheless, Dan remembers his father taking him to airports to watch planes come and go and remembers building models as a kid. He always knew as he grew up that he would do something in aviation. After high school, he went to a community college in his home town and, while there, got his pilot’s license and then his CFI. He flew as an instructor to earn money while he continued taking courses toward an A&P certificate. After leaving community college with his newly-earned certificates and an Associate’s Degree, a family friend got him a job with Dow Jones, not a job as a stock trader, but one delivering the Wall Street Journal…. by plane. He flew the Convair 330/340 between larger midwest cities, delivering the latest editions of the paper. 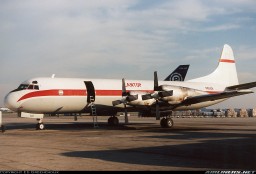 That lasted for about 2 years when he got a job with Zantop Airlines flying Convair 640s and Lockheed Electras like the one pictured here.

Dan flew for Zantop for about four years. During the time he flew for Zantop he finished up his education by earning a four-year college degree. But he knew there were better jobs out there in the aviation world, so he got together all his flying experience, put together the requisite letters of introduction and resumes and started sending them to the major airlines. He got interviews and he got rejections, but he eventually got a job, the job he still has.

Along the way, he bought a Cessna 206 and flew it around for a while, but eventually sold it because he just wasn’t using it enough. That divorce didn’t help the cash flow, either. But he’s remarried and has a son and daughter. His daughter is married and gone now, but Dan and his son spend time flying their model helicopters and working on their model trains. Not the little trains, mind you, but the 1/12 and 1/8 scale versions. He had a photo of his son sitting on a seat attached to the first car behind a 1/12 scale locomotive, one of those modern-looking yellow locomotives you see pulling that 4-mile-long string of box cars while you sit at the crossing waiting for the caboose to come into view. He said the 1/12 scale versions have the capacity to tow cars with up to six adults seated in them. (For those of you on the U.S. West Coast, it reminded me of the train they had at the Nut Tree Restaurant/Airport back when the restaurant was still open.) Dan also had photos of the machine shop he has amassed while working on his trains and associated equipment. Metal lathes, milling machines, plasma cutter, etc. Versatile and handy.

Dan has about five years until he reaches the once-magic age 60. That’s when he would like to retire, but who knows what will happen to the airline business between now and then. More consolidations? More bankruptcy’s? More retirement system defaults? Any of them could and would make a huge effect on a person’s ability to retire and still continue to live in a style near what they had planned. He’s just taking it as it comes, flying as safely as he can and trying to ignore the noise. None of us can do more than that.