At the end of the last post we had arrived in Tokyo on the third leg of this trip. Today finds us in Tokyo again. I see a pattern rotation developing. The past three days were spent flying a round trip to LAX.

The first leg was fairly uneventful, the way you would want all your flights to go. As the junior copilot, I ended up with the first break, lasting one third of the planned flight time of 9:12. That part of the flight turned out to have the majority of the turbulence that we encountered and was the reason I got no sleep at all. We were flight planned on a route  that took us across the north-central Pacific to just west of San Francisco. 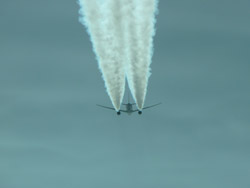 From there we were cleared direct to Avenal for the Sadde Six Instrument Arrival with vectors to runway 24R. The weather at the time of our arrival was calm winds, 1300′ overcast and 2 1/2 mi visibility in haze and a solid marine layer covered the entire valley. We were sequenced behind a B-757 and told to keep our speed up at 190 knots until the final approach fix. It seems that no matter how much you brief the arrival and approach into LAX, it always feels like a goat-rope when you get in close. The controllers are just trying to keep the traffic moving as smoothly as possible, but you end up descending earlier than planned or slowing early or both, with a possible speed-up in the middle as a hole opens in the line of traffic. Of course, our arrival time didn’t appear to be in their quiet period, either. Everything settled down as we turned onto the final approach course and the landing turned out fine.  We even exited the runway before the last exit, not something that we manage to do very often on this 8900′ long runway.

I started my layover by first checking my email and then taking a nap. I slept for 3 hours and woke up feeling terrible. I was still too tired to get up, but knew I had to force it or I’d fall back asleep and wake up in the middle of the night. I figured that getting a little exercise would be the best solution to getting the blood flowing, so trundled down to the workout room and harassed the treadmill for about 40 minutes. That complete and feeling a little better, I got cleaned up and went down to the hotel bar to see if I could get dinner. I ended up with a salad and a burger, then dragged myself back to my room. I ended up sleeping another 12 hours that night. Having a layover in my body’s home time zone always helps me sleep well. Of course, that set me up for not sleeping on my break during the flight back to Tokyo, but I’ll take a good night’s sleep whenever I can get it.

For the LAX-NRT leg we had another captain with us, a student for our newly qualified OE instructor. Our new captain was moving up from flying captain on the A-330 and was already used to the international pilot’s routine. He just needed a little more familiarity with our 747-400 operations. The two captains decided to work the first half of the leg, take their break and then fly the last hour. As I expected, no sleep came to me during my break, so I listened to podcasts as I lay in the bunk staring at the ceiling.

Eventually we made the shift change and I occupied the right seat while the other copilot sat in the left.  Our crew changeover briefing included a review of the aircraft maintenance status, any problems with passengers or crew that had occurred, our progress on the flight plan and and any over/under time or fuel burn at the flight’s midpoint. Another thing that was covered was a company report of turbulence along our route of flight reported by a previous flight. Specifically it identified a 200 mile wide upper trough line with moderate turbulence at our altitude and a PIREP from a 747 in that area that experienced code 5 turbulence, corresponding to moderate to severe.

We entered the lat/long points of the trough line in the navigation system to see where they fell in relation to our planned route and found the line crossing our path about 3 hours ahead of our position at that time. We would have to watch for more reports and listen to see if there were reports by other aircraft.

Our route to Tokyo followed a similar track as our flight from Tokyo had the day prior. This track was a bit farther north and ended up joining the established routes between Alaska and Japan right around Adak, Alaska.  We had slowly been catching another aircraft as we progressed across the Pacific and as we neared the area of reported turbulence, I began watching the other plane’s contrail ahead of us. 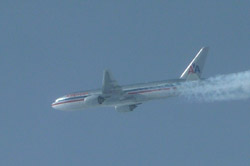 It was streaming out behind the other plane for maybe a mile or two, sometimes lengthening and sometimes disappearing completely depending on the atmospheric conditions. This other plane was about 20 miles in front of us and 1000′ higher than our altitude. About where our company said we’d hit the turbulence I noticed that the other plane’s contrail becoming very turbulent. We called the Purser and told them to have everyone stow their carts and take their seats. About 10 minutes later we entered and an area of moderate turbulence that lasted for about 20 minutes, right in the forecast area. Our warning to the flight attendants and their PA announcement to the passengers had everyone buckled in before we hit the bumps, perfect timing.

About 20 minutes later we were close enough to take some pictures of the plane in front of us, an American Airlines B-777.  It’s really hard to pass up air-to-air photo opportunities.

With one hour remaining in the flight, we woke up the two captains and they returned to the cockpit and took over the flying duties. (The OE trainee needs the take-off and landing on four legs to complete the OE training.) As we neared the Tokyo’s Narita International Airport, we could tell that there was a heavy influx of planes, so we weren’t surprised when we were given holding instructions and an EFC time  of 20 minutes in the future. Having received the ATIS information during our descent, we knew that the winds were going to be strong,  gusting and 10-15 degrees off the runway heading. As we descended to 2500′ AGL the winds were still 30 degrees off runway heading and indicating 51 knots. The ceiling was about 1500′ and there was light rain falling. It was going to be a great introduction to landing for the new guy. 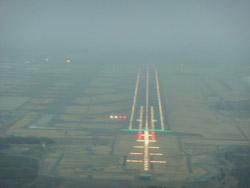 The approved solution for crosswind landings in the 747 is to crab on final to remain aligned with the runway centerline and then remove the crab in the flare. It takes some serious hand-eye coordination to move all the controls at the same time, pitching to flare, yawing to remove the crab angle and rolling ailerons into the wind to keep the wings level, but you get the hang of it as you progress up the large aircraft food chain. You don’t really want to land wing-low when the wings are 200′ long. It doesn’t take much bank to scrape the bottom of an engine pod on the pavement.

The new captain did a great job, especially considering the weather conditions. I imagine he slept well that night.

Next on the schedule is a round trip to the midwest’s mini-apple.