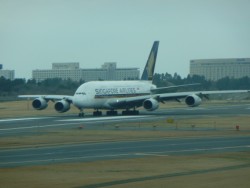 The flight planning progressed smoothly except for the part where we were briefed on all the turbulence along our route. We would be crossing the Pacific quite a bit south of Alaska, crossing the U.S. coastline over Seattle. Mount Redoubt in Alaska had started erupting again and no flights were using Alaskan routes . The copilot’s duties during the preflight include checking the captain’s entries into the Flight Management System then manually inputting the forecast winds for the flight at four altitudes over each navigation point. It’s a lot of typing, but is completed quickly if you keep at it. We were  ready to push back from the gate at our  noon departure time, but the boarding of the passengers  had not yet been completed. Apparently the information concerning our proposed departure had not been made as public as it should have been and some of our passengers were still wandering around the terminal.

We finally pushed back from our gate 25 hours after our originally scheduled departure. We were pushed back with our tail facing south with a plan to taxi to runway 16R for departure. The engine starting process went smoothly and we were given clearance to taxi to the ramp exit and contact ground control. As we made our turn toward the parallel taxiway and contacted ground we were told to hold for the Singapore Airlines flight crossing left to right on the parallel taxiway. It took me a while but I finally located my camera and had the other copilot take some photos for me as, a little while later,  the A-380 started it’s take-off roll.  We slowly worked our way through the line of aircraft waiting to depart. As we reached the head of the line and were holding short of the runway, the captain said I had the aircraft and he would handle the radios. Simple pleasures. The copilot seat has a steering tiller, however as copilots we rarely get the chance to see if it’s really connected to the nosegear steering system.  We were cleared onto the runway and cleared for take-off. I released the brakes and taxied onto the runway, lined up on the centerline and advanced the power. We were fairly heavy but still rotated and lifted off the runway with plenty of pavement remaining in front of us. As we lifted off I caught sight of a patch of burned grass to the right of the runway, the final resting place of the FedEx aircraft.

The weather had turned cloudy again and we soon entered the clouds. We made our turn out of traffic to the east and as we passed 10,000′ were given clearance direct  to an oceanic navigation point about a half hour away. As we passed FL180 the captain said that he had seen all he needed to see from me for the line check and our game of musical chairs was to begin. First, the captain got out of his seat, removed his bag of manuals and stepped to the rear of the cockpit. His OE student then got into the left seat and got his book bag all arranged the way he wanted it. Then when the new captain had assumed comtrol of the aircraft and radios, I got out of my seat and removed all my equipment. Then the OE instructor/check airman got into the right seat and set all his equipment the way he wanted. The other copilot had already left the cockpit to get into the bunk and was knocking on the cockpit wall to indicate that he was safely in bed as our seat changes were completed. The bunk room has two beds, one above other other to be used by the additional pilots on long flights. The  bunk room is not what you would describe as spacious. There is room for one normal sized adult to stand in the bunk room next to the beds. The accepted practice is for one person to go into the room, shut the door, get undressed and get into bed, then knock on the cockpit wall to let the other pilot know that it’s safe to open the door. When the break time is over, the cockpit workers can ring a chime that is heard only in the pilot bunk. The bunk occupants then knock on the cockpit wall again to acknowledge that they are awake and getting ready to go on duty. A twenty minute ‘heads up’ chime is usually plenty of time to get dressed, make a bathroom run and then stop in the upper deck galley for some coffee and to put in a meal order.  I usually opt for the ‘whatever is left’ meal.

I got into the right seat again as we crossed the last oceanic navigation point before the U.S. coastline. We had made the entire crossing at FL310 in an effort to avoid the majority of the turbulence and had been fairly successful. Unfortunately, just after we contacted Vancouver Center we entered an area of light to moderate bumps. As soon as I could grab the bouncing microphone I told Center of our deteriorting ride and asked for a higher altitude. We were cleared to climb to FL370 and were told that ride reports indicated it would be a smooth or at worst occasional light chop at that altitude. Center was right on the mark about th eride and about ten minutes later were even nicer to us when we were cleared from our present position directly to the first navigation fix on the instrument arrival procedure for our destination. It couldn’t get any easier than that. Soon it was time to call the captains back to the cockpit for the descent and arrival. Our new captain again did a great job with the landing, in spite of the turbulent winds. They seem to be following him from landing to landing.

Since we had been delayed over 24 hours, the flight we were supposed to work on the way back to Narita had already departed with a crew pulled from the pilots on reserve. The remainder of our trip only consisted of the flight back to Narita, an overnight and then a flight back to our base.  Pilot scheduling couldn’t do a whole lot with us with only a day remaining of our original trip duty time, so we were given an overnight, then a deadhead flight back to our base the next morning. Our flying for the month was finished a day early. The two captains asked for and were granted an immediate release and headed for home from the airport. The other copilot on our crew was scheduled to go back to Narita the next day and I had business back in home base, so the other copilot and I, along with the two interpreters on the crew headed for the layover hotel. Our international flights always have one or two interpreters assigned to the crew. For our flight we had one from Tokyo and one from Bejing. They help with passenger issues and translate any PA announcements. Instead of just hearing the PA only in English you also get to hear it in Japanese and Mandarin. 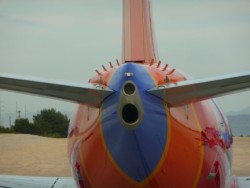 The following morning I arrived at the airport early enough to get some coffee and a little breakfast, then got on the flight back to my base.  I quickly got my business taken care of and ran upstairs to try and catch an early flight home. The good news was that I got to the departure gate and the jumpseat had not been reserved nor had anyone checked in for the cockpit jumpseat before me. Bad news was thatthe flight was on a maintenance delay that would have it leaving after the flight I normally take. Disappointed, I wandered back downstairs to check my mailbox and talk to the chief pilot. I had a question about some things that were scheduled to happen in the near future with regard to our merger-in-progress. That completed, I logged into the company computer to see if any trips were in open time that looked promising, then checked that delayed flight I had just tried to board. Wonder of Wonders. They had swapped airplanes and were projected to depart in a half hour. I grabbed my suitcase, took the elevator to the tram and headed for the opposite end of the terminal. Not only did I get on the flight, but I got a seat in the cabin. It was  center seat, but it was still more comfortable than the cockpit jumpseat. That left one more flight to get home. The airline I try to jumpseat with has flights to Reno about every 90 minutes. I made the concourse change as fast as I could, but arrived at the gate in time to watch one of my flights push back and depart on time.  I signed up for the jumpseat on the next flight, which was going to be full and 45 minutes late, having been delayed departing from Dallas by thunderstorms. 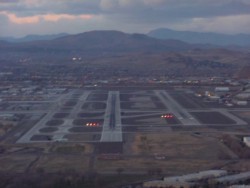 Eventually the inbound flight arrived, we all boarded and I headed for home for a few days. It’s always nice to see your home airport on short final when you’ve been gone for a while (even if it’s too bumpy to hold the camera steady).