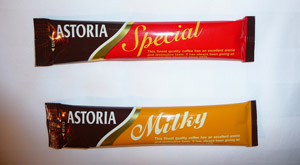 We took off from Nagoya at 8 pm for our 4-hour flight to Manila. The weather was clear, but we were fighting the jetstream most of the way south. 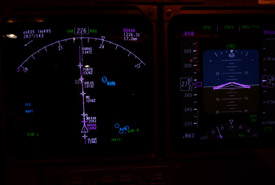 You can see the winds we had at altitude in the top left corner of our navigation display. It shows here that at the time I took the photo we were experiencing winds from 283° at 143 knots. We were often seeing 105 knots of wind on the nose. It seemed like the flight took forever, even the part where we came out of the jetstream and the winds died down. That transition out of the jetstream winds gave us light to moderate turbulence for about a half hour, another fatiguing experience.

By the time we reached the Manila terminal area, the winds were light and variable and whatever thunderstorms that had been in the area had moved off to the south. It was a beautiful night as we were vectored onto a high right downwind, flew past the airport and were cleared for the VOR/DME approach to runway 6. There is an ILS approach for that runway, but the ILS has been NOTAMed out of service for at least a year. Non-precision approaches are not something we do very often, so we had slowly and methodically covered the procedures, including button-pushing sequences and verbal call-outs, before we began our descent from cruise altitude. The FMS actually calculates it’s own glideslope from the approach intercept altitude down to the MDA, including any altitude constraints on final. Once the approach is set up and activated we monitor the approach progress both on the navigation display and using the raw (CDI) data from the VOR. At no later than the MDA we disconnect the autopilot and take over for for a manual landing. It’s really nice to be able to fly one of these approaches in clear weather and watch the progress in relation to the runway. Simulators are great for getting familiar with the procedural steps,  but doing the approach in the aircraft in good weather and watching it all come together is a real confidence-builder.

Part of the cutback in international flying that we are seeing is a reduction in the frequency of flights to some destinations. We now have no departures from Manila on Tuesdays or Wednesdays, so our arrival on Monday night meant a layover of a little more than two days.  We have two crews sitting here for that time, our flight from Nagoya and another crew that had arrived from Tokyo.  Thursday morning we’ll swap destinations and our crew will fly to Tokyo while the other goes to Nagoya.

Some time in the middle of the afternoon I got a call from the captain saying that he was getting together with the other crew and going out to dinner. The first officer on that crew is retiring next month and they were going to celebrate the occasion. I couldn’t pass up that kind of opportunity, so I agreed to meet them in the lobby that second night of the layover. That’s when I met the other first officer, Karen.

Karen has quite a story and is another rare example of an airline pilot who also flies for fun. Back in the early 1970s Karen was going out to her local airport to hang out and soon found herself washing planes and helping out a local pilot who was breaking into the aerobatic competition and airshow arena. She ended up being a crew chief for Leo Loudenslager.

For those of you not familiar with the name, or his history, I’ll digress for a moment. Leo was a mechanic on B-52s in the early 1960s, based at Travis AFB in northern California. He heard that an air race was going to be held nearby, so he took some military leave and went up to Reno to watch the first running of the Reno Air Races (held in 1964). He got so enthused about flying that he decided to get his license. He got out of the military and went home to New England and started flying. In 1966 he was hired by American Airlines and continued working with them until his untimely death in 1997.  He flew aerobatic competitions in a highly modified Steven’s Acro that he bought in 1970 and modified to such an extent that he renamed a  “Laser 200”.  Leo Loudenslager went on to win the U.S. National Championship Aerobatic title a record seven times and, in 1980,  also won the World Aerobatic Championship.

Karen continued to work with Leo until he moved away from her local airport to continue his aerobatic/airshow career. When he left he suggested to her that she try life as an airline flight attendant. Karen thought about that for a while and decided to send out some applications. She ended up interviewing for and being rejected by twelve different airlines. She took the hint, thought about the situation a little more and decided to get her pilot’s license and go at the airline business that way. She ended up interviewing for five different airlines before landing her airline job. That airline merged with another and then another and now another, but she has remained in one airline aircraft seat or another for just under thirty years, finishing up her time in the right seat of a 747-400.

She hasn’t been idle in her time off, either. She continued working with smaller aircraft and decided to try her had at aircraft building. Her first project was a single-seat EAA AcroSport. She flew that for a while and when the Christen Eagle kits became available, built one of the popular 2-place aerobatic biplanes, a plane that she still owns and flies. She has honed her building skills through the years and has often passed along her expertise as a welding instructor at the Oshkosh workshops.

We had a great time talking on and off throughout the evening. Karen has had a full, aviation-filled life and will, I’m sure, be in the skies for many more years beating up the air around her local Connecticut airport and spending time helping local aircraft builders complete their projects.