The past three days have been spent flying from Japan to the U.S. and back. When we left Japan a couple of days ago, we were assigned Track one for the initial part of the flight, then transitioned to a random route. Air traffic control establishes specific tracks or routes across the oceans to make the flow of aircraft operate in a more orderly fashion. The tracks vary in location from day to day and sometimes throughout the day, and track messages are published giving the latest routes and their effective times. The tracks are usually roughly aligned with the most favorable winds.

Our initial use of this track got us out of Japanese airspace, however our dispatchers and weather forecasters determined a random route across the Pacific for the remainder of the flight would take better advantage of tailwinds. Since the cost of fuel has gone through the roof, I imagine we will see more of this in the future.

When we left Japan, we were cleared for takeoff next in line behind an Airbus A-330 which was headed for Portland. They had also been given Track one and were cleared to climb to the altitude we had requested, leaving us at a lower altitude until our route diverged from theirs and we were able to climb higher.

The A-330 cruises at about mach .83 and we were cruising at mach .86. As luck would have it, we caught up with the A-330 just before our routes diverged and almost at sunset. Here is a picture of the Airbus as we crossed paths. The planes are 1000′ apart vertically. My camera has a 10-power optical zoom that can be digitally increased to 17-power. 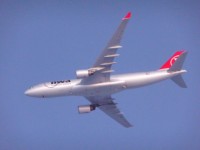 The captain I flew with on this flight is 59 years old. He started out flying in the Navy for about 8 years, then got out and started his airline career. He has been furloughed twice, has been employed by two different airlines, has so far been through one merger and survived one strike. Will he stay and fly past age 60?  He can’t say at this point. The determining factor is whether or not there will be a viable retirement system in place after the end of his next year. There is no way of knowing what will happen next. Companies used to have the philosophy that they took care of the people who spent their careers serving them, but that is no longer true. If the bottom line will look better if they dump the retirement system, then they default on it and the employees can look after themselves. We’ve seen it happen again and again, and not just in the airline business. The days of the defined benefit retirement plan are long gone. You new airline pilots sitting at the bottom of the seniority list are in a great position to be able to determine your retirement future. Yes, you’re going to face furloughs, mergers, company failures, and possibly strikes, but you will survive just as the rest of us have. What you can do is make sure that you are funding your own retirement, because you can rest assured that nobody else will.