So far this has been a fairly interesting trip, though it started out a bit unusually. At the end of bidding for my flying month I had been assigned an 8-day trip that was to start on the last day of the month and carry through into the month of February. Not a great trip, but livable. 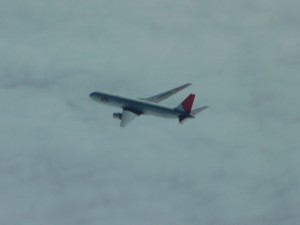 One nasty layover – only 11:30 vs. the normal 24 hours or more that we normally have on this airplane. (Yeah, I know. When I was flying domestically I would have killed for an 11:30 layover.) I had finished my previous trip and was at home trying to get back on the right time zone when I got a call from the training department. It seems that they wanted to take my trip and use it for OE training (Operating Experience). Sounded great to me.

The contract that we have says that if training displaces you from a trip that you have been awarded during regular bidding, you are entitled to be paid for that trip as if you flew it. BUT, you must sit “time available” during the days that the trip was to operate. Time Available means that you must be able to answer your phone from 7 am to 3 pm (base time) and be available to take a trip, if it is assigned to you. Base time means the time zone where your pilot base is located. I live on west coast time, but fly from a base in the eastern time zone. So, at home I would have to be available 4 am until noon. I could live with that. If the number of reserve pilots at the base is reduced to such an extent that those remaining may not be able to cover trips still needing pilots, a time available pilot would then be required to travel to their assigned base and be on call there rather than at home.

I kept track of open trips (none for the entire month) and called the scheduler the morning I would normally have commuted to work. It looks good, she said. She had a reasonable supply of reserve pilots so she told me to stay home and just be near the phone during the required hours.  Good deal. I canceled my hotel reservation and started working on things at the house.

Two hours later my phone rang. An automated notification of a change to my schedule. Hmm, I think. Must be a time change  for my mid-February trip. Nope. The original 8-day trip had been put back into my schedule. I immediately called the scheduler back. She knew nothing about it. The training scheduler had decided that they didn’t need that trip any more and just gave it back. (I figure that either the student or instructor called in sick or one of them suddenly realized that the trip worked over Superbowl weekend and it made them sick.) Having the trip suddenly put back on your schedule would be no big deal for someone who lives in the city where they are based. However, it takes me 12 hours (counting time zone changes) to get to work and I had already missed my normal commuting flight. I had two other opportunities. One scenario would get me to base at 10 PM the night before the trip, which was workable,  and the other would get me there at 5 AM the day of the trip, which would put me way behind the sleep power curve. I packed and was out of the house in 45 minutes headed for the airport and the first of the two flights that would get me to work. Luckily, mid-week and mid-day, both flights I needed had empty seats.  An unusual start to one of my trips, but one that worked out after all.

This trip has two Taipei layovers, a short one and a long one. We had the short one last night, the long one is tomorrow night. When we left Taipei today, we took off just behind a JAL 767. We climbed up to FL390 behind them, then accelerated to our cruise speed of .85 mach. According to the Wikipedia entry on the B-767, it’s normal cruise is .80 mach. JAL was initially on the same route as we were, so we slowly overtook them. The photo above was taken as we passed the  767 which was cruising 2000 feet below us.

When I took the 767 photo I noticed that I had a few more photos in the camera that I have taken the past couple of trips. 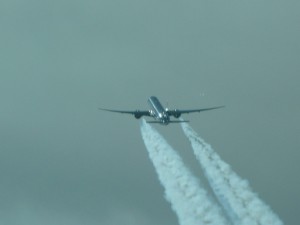 This first one was taken enroute to Japan on my last trip. From the coloring, it looks like an Korean Airlines 777, but it could just be the lighting. I believe it was 1000 feet below is on the organized track system between Alaska and Japan.

The next photo was taken as we were waiting for takeoff from the Shanghai Pudong airport. It shows a Shanghai Airlines Boeing 757 about to start its takeoff roll. 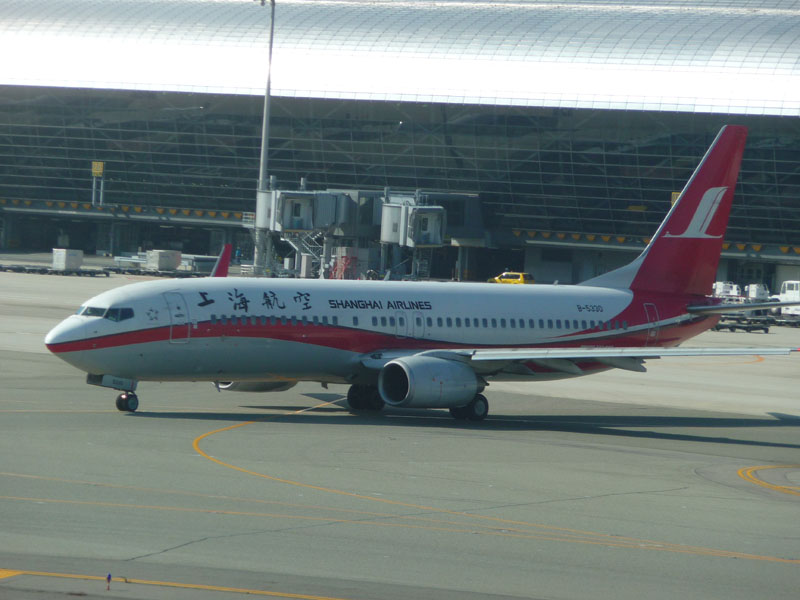 The last photo is of a Hawaiian Airlines DC-9 just touching down at the Honolulu Airport. We were on a parallel taxiway making our way to Runway 8R, the “reef runway” for our flight back to Japan. 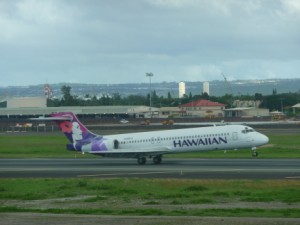