Sorry about the delay in getting back to you. Time got away from me when I came home on a Thanksgiving break. It’s amazing all the things that can pile up when you leave for five weeks. 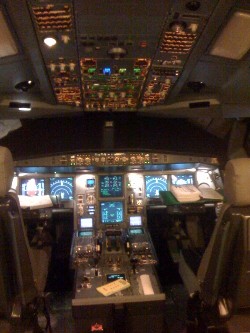 Let’s see, when I left off last I was in the Full Flight (Simulator) phase of training and had completed the first two sessions.  I had two more practice sessions and then the ‘Maneuver Validation.’   These simulator periods aren’t really ‘practice.’  Each session introduces some maneuver that you have not accomplished in a previous period.  In addition to the obvious precision (ILS) and non-precision approaches (LOC, LOC B/C, VOR, RNAV), crosswind landings and go-arounds/rejected landings we also practice windshear recoveries, EGPWS escape maneuvers and TCAS resolution advisories.  The sessions are extremely full each day. The Maneuver Validation consisted of at least one of everything I have listed above (only one type of non-precision approach). It went well and I headed home for the turkey feast.

I returned to training the following Monday and had simulator sessions Tuesday-Friday and had the check ride scheduled for early Saturday morning. Up until this point my simulator sessions had been flown from the right seat, my bid position for the airline. Now I was shifting over to the left seat for the remainder of the training.  Since I would be awarded a full type rating at the end of the course, the check ride was to be conducted with me operating as a captain. It is an additional hassle for the co-pilots going through training, but a full type rating rather than one with left seat privileges only at cruise when flying for this carrier is worth the extra effort required.

The simulator training now shifted to operational flights rather than ‘pattern rides’ practicing approaches and maneuvers. If my memory serves me, the first  session was  a flight across the Atlantic using the NAT Tracks with their requisite clearance requirements through Gander and Shannon. It also covered contingency operations should something happen that required a deviation off the tracks and to an alternate airport. Subsequent sessions had flights across the Pacific with a diversion to a Russian alternate airport and a flight within Asia with a landing in Beijing. Those completed, I was finally down to the last simulator session.

I met the APD who was conducting the type-rating evaluation at our 5 am report time. We exchanged pleasantries and then he introduced the FAA representative who would be with us. Oh joy. The APD said that the FAA was there to evaluate him, not me. Yeah, nice try.  Daisy chains are SO much fun – getting a check ride from someone who is, in turn,  getting a check.  A little while later my ‘copilot’ came into the briefing room – a captain instructor who had provided support for a previous simulator session. The APD explained how the session was to be conducted. All the normal simulator check ride stuff – treat everything as if it were an actual flight. If the malfunction is a problem with the simulator, he would let us know. If we realized that we had made any mistakes along the way we were to continue and deal with it.  We were given the flight paperwork and some time to look it over then made our simulated call to the flight dispatcher to get the latest updates, weather and flight release amendments.  This ‘flight’ was to start at Frankfurt and fly across the NAT Tracks to a North American destination. That part complete,  I gave my simulated briefing of the flight attendants and we made our way into the simulator. I had elected to be the pilot flying, so I progressed through my preflight, programming the FMS and checking the items on my side of the cockpit. I gave my pre-departure briefing and called for the first checklist.  All progressed well until engine start. We got some weird maintenance messages as the engines spooled up (such as an EGT over-temperature warning before the engine had been provided with fuel)  and started trying to figure out the cause of the problem.  Enter the APD – that’s a simulator problem. Whew.  It was short taxi to the active runway and we were cleared for take-off.  there was no reason to abort the take-off  so we got airborne and started on our way, climbing to FL360 on an RNAV departure. Other than having to remind the copilot to do his job (flow patterns) things were going well. Oops, TCAS traffic advisory – I was spring loaded for the avoidance maneuver that never came.  Next thing we experienced was overheating oil in the unit that drives one of the aircraft generators.  Out came the manual and the unit was disconnected and the APU was started to replace the inoperative generator. Our overwater capability has degraded somewhat, but after talking to the dispatcher and maintenance control we are cleared on our original route with an additional enroute alternate.  The next challenge was weather ahead. I elected to deviate right rather than left to make it shorter to get back on the programmed route which had a bend to the right after the weather.  Wrong choice – we ended up in intermittent moderate turbulence. Oh well.  Next time I’ll remember that step about checking the winds before I make the turn choice.  We got back on course again and started the process of requesting our oceanic clearance from Shanwick. Ding. Another warning. We were losing hydraulic fluid. We shut off the hydraulic pumps for the system, but it was too late. While the copilot finished the checklist I flew the plane and called the dispatcher and maintenance control again. Yep, time to divert. We discussed the divert options and came up with Amsterdam and received a re-release to make it legal. By then the copilot was finished with the malfunction checklists and he briefed me on how the hydraulic failure would effect our approach procedures. That finished, I had him get a clearance to Amsterdam. When we had our new clearance I turned the plane over to the copilot and as he started the turn and descent I briefed the flight attendants and passengers. The hydraulic failure meant we would have to emergency extend the landing gear and would have no normal brakes (though our backup system was available) and no nosewheel steering. That meant a full stop straight ahead on the runway and a tow to a gate. Oh, and an overweight landing, since we hadn’t burned off much of that gas we were supposed to need to get across the ocean.  After all that the instrument approach and landing were a non-event, especially since I was smart enough to let the airplane do the approach and landing. We shut down the engines on the runway, a tug took us to the gate, we completed all our checklists and the APD leaned over the seat and shook my hand. An A-330 type rating was to be added to my certificate. I could feel my blood pressure lowering as I walked out of the simulator.

The last step in this training program involves an actual trip with an instructor in the left seat. This is referred to as an OE trip – Operating Experience.  My trip is scheduled in a week and will have four Atlantic crossings in a 6-day period. The final leg will be a line check.  It will be the first time I will have been in the cockpit of an actual A-330.