Fatigue – When You’re Tired of Everything

Fatigue is part of the reason it was such a long time between posts recently. I got home after a 13-day trip and was just plain drained of energy. After having made these long trips for the past 15 years, or so, we have developed a few rules that we follow when I return home. I mentioned those previously and will link to that post at the bottom of the page.

It was just a coincidence (I assume) that waiting for me on my desk when I returned was an ALPA magazine with an insert titled The Airline Pilot’s Guide to Fighting Fatigue. A few days later, when I could again focus and interpret what I was reading, I looked through the pamphlet to see what it said that I should be doing to minimize the ‘drained’ feeling I always have when I get home. It was put together by the union’s Fatigue Blue Ribbon panel, formed in 2007. 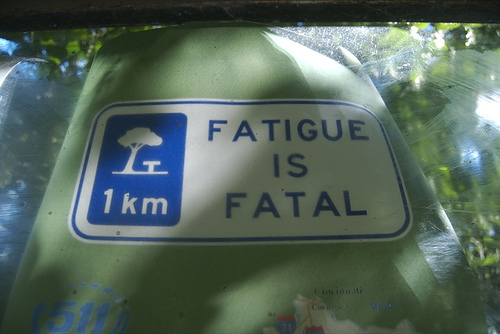 One of the initial points the panel brought out is that fatigue is not just being drowsy or tired. The  MedlinePlus website, a service of the U.S. National Library of Medicine and the National Institute of Health says that

Fatigue is different from drowsiness. In general, drowsiness is feeling the need to sleep, while fatigue is a lack of energy and motivation. Drowsiness and apathy (a feeling of indifference or not caring about what happens) can be symptoms of fatigue.

The Mayo Clinic says that fatigue can be caused by one or more of the following five factors:

All of these factors except the medications could easily be present in a professional pilot’s daily schedule. Pilots are regulated fairly heavily in the medication department, with only a small number of relatively benign medications acceptable for use.

Lack of sleep can definitely have detrimental effects on your ability to function efficiently. According to the Canadian Safety Council:

Losing as little as two hours of sleep can negatively affect alertness and performance. Sleep deprivation affects a person’s carefulness and ability to respond to an emergency. Symptoms can include: decreased judgment, decision-making and memory; slower reaction time; lack of concentration; fixation; and worsened mood.

I had never seen a comparison of the effects of fatigue to the effects of alcohol, but apparently studies have linked the two lists of symptoms and effects and a fatigue-induced relative alcohol content is possible. Being awake for 17 hours is comparable to a blood-alcohol level of .05% (above the legal limit for flying). If that time is extended to 24 hours without sleep, it is equivalent to a blood-alcohol level of .10% ( legally drunk). I’d rather be off duty and having the drinks, myself.

The physiology of fatigue involves both the amount and quality of sleep that you get as well as your body’s circadian rhythm. Studies have shown that the average adult needs 7-9 hours of sleep a night. Sleep loss is cumulative and losing one hour of sleep a night for a week is equivalent to just not sleeping at all for one of those nights. I know from experience that the older you get, the harder it is to get a good night’s sleep. Sometimes the loss of sleep is due to something simple like too many liquids close to bed time, other times it’s a function of the stresses of life popping into a brain that seems to not want to shut off. The pamphlet reinforced this when it brought out that older crew members (50-60 yrs old) on long haul flights tended to have 3.5 times more sleep loss than their younger counterparts (20-30 years old).

Our bodies have an internal clock that tends to regulate our sleep/wake cycles that is called “circadian rhythm.” The Medical College of Wisconsin on their Healthlink site has this description:

Circadian rhythms are regular changes in mental and physical characteristics that occur in the course of a day (circadian is Latin for “around a day”). Most circadian rhythms are controlled by the body’s biological “clock.” This clock, called the suprachiasmatic nucleus or SCN, is actually a pair of pinhead-sized brain structures that together contain about 20,000 neurons. The SCN rests in a part of the brain called the hypothalamus, just above the point where the optic nerves cross. Light that reaches photoreceptors in the retina (a tissue at the back of the eye) creates signals that travel along the optic nerve to the SCN.

Signals from the SCN travel to several brain regions, including the pineal gland, which responds to light-induced signals by switching off production of the hormone melatonin. The body’s level of melatonin normally increases after darkness falls, making people feel drowsy. The SCN also governs functions that are synchronized with the sleep/wake cycle, including body temperature, hormone secretion, urine production, and changes in blood pressure.

The body clock isn’t like a watch, however, and will take days or weeks to synchronize to a new time zone. That means that flight crews will probably never adapt to the new time zone at their layover location. Some crew members use their layover time zone to sleep, others try to stay on their home time zone for their sleep/wake cycles and some vary their method depending on the length of their scheduled trip. You have to figure out what works for you.

The ALPA pamphlet provides some ‘helpful hints’ you can use to get better rest. 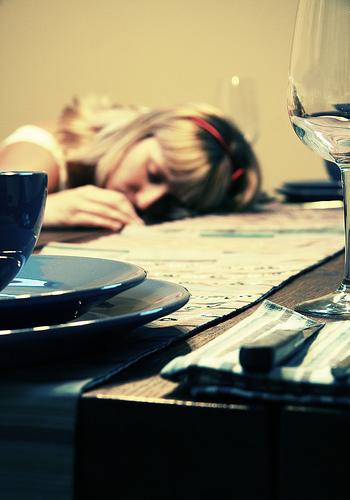 For those of you in Canada, the Canadian Aviation Regulations (CAR 720-23) allow “controlled rest on the flight deck” for air carriers with it included in their Operating Specifications. That means it’s legal to coordinate with the remaining crew and then take a short nap while you’re in the seat. A 20-minute nap can increase alertness by 50%, take 40 minute nap and alertness gets a 100% increase. The U.S. Federal Aviation Regulations have no such provision. I guess the FAA just doesn’t believe that all this research on fatigue is anything to worry about.

Fatigue was one of the concerns I had when I checked out as a narrow-body captain. I live on the west coast and knew that a lot of my trips would be on the east coast with morning departures as early as 6 am.  As the captain, you have to be alert enough to analyze the situation and make the appropriate decision as well as monitor the operation of the aircraft. The trips, long-haul or domestic, are never long enough for your body to adapt to the time zone changes. You have to do the best you can to get exercise, eat as well as you can and sleep whenever it’s convenient. At least the U.S. regulations limit the time you can be on duty without a break. There are flight time limitations (such as 30 flight hours in 7 days) and there are limits on the length of time you can be on duty in the cockpit without a break (which varies with the number of required crew members and whether it is domestic or international flying). There are also minimum crew rest times between work periods. It all sounds good on paper, but your alertness hinges on your ability to sleep on your break/crew rest or the night before the flight.

What do you do to ensure you have the rest you need to complete your next flight as safely as possible?