My overnight in the U.S. was a quick one. Some work on the computer, a nice dinner and then a short 12-hour nap. Boy, did I need that.

But now we’re back in Japan again. The flight was fairly routine and 11:38 gate to gate, just 21 minutes longer than the westbound crossing thanks to light winds on our route. 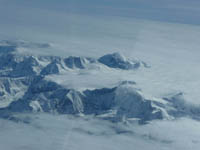 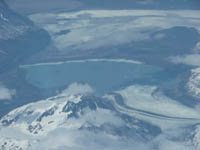 Most of the flight time was spent looking down on a solid cloud deck, but every once in a while Mountains would poke up through the clouds or we would get a good view of the terrain below us.

Our route took us directly over Anchorage and, miraculously, the clouds allowed a few good shots of the city, though a little haze washed out the colors. We were cruising at FL350 by that time.

This is a overhead view of the Lake Hood seaplane base in Anchorage. You can also see the hard-surface runway in the upper middle of the lake complex. 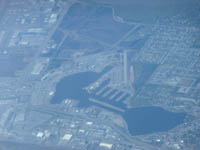 I have also tried imbedding a short video I found that shows a float plane taking off from lake Hood. Referencing the photo, the photographer is standing on the shore on the bottom of the photo about where the long island forms the two lanes between the round lake sections and is looking toward the right bottom of the picture. There is a hotel behind the plane taking off, now called the Millenium Hotel. I was temporarily based in Anchorage, flying 747 cargo planes and lived in that hotel. Luckily, the four months I was there were June-September. It was great to get up in the morning, get a cup of coffee and then go sit on the patio and watch the ‘fleet’ launch – everything from planes like the one in the video to Beavers and Turbine Beavers. A really nice way to start the day.

From the Anchorage area we jumped onto R220, one of the organized tracks from Alaska to Japan. This particular track is the farthest West, just along the coast of Russia. I tried taking a picture of the Jepp Chart [P(HI)], but it wasn’t going to work out so that you could read it. Maybe somebody can find a link to one someplace if you’re interested. 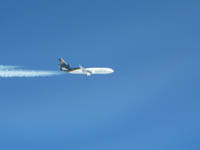 Just past Shemya near a navigation point called Nogal, we passed a UPS MD-11 on the same route cruising 1000′ above us. We took a couple of photos, then called them on the air-to-air frequency we use in the Pacific. It’s nice to be able to talk to other planes enroute to check on the ride quality ahead and to get the latest HF frequencies for Tokyo or San Francisco if you don’t happen to have them. The UPS crew was headed to Guangzhou, China, just NW of Hong Kong (close enough to be on the Hong Kong area chart). I got an email address for one of them and sent off the photos. It’s not often that you get a picture of yourself at cruise from the outside.

After that, the rest of the flight went smoothly….well except for the landing, but that was my doing. We flew a visual approach (backed up with the ILS) under a cloud layer with rain in the area. Tower called a 10-knot loss of airspeed shear at 1000′ as we checked in with them. We found that to be true, but a small throttle adjustment punched us through it without problems. The touchdown was fine, I just relaxed too much and let the nose settle ‘firmly.’ Oh well, maybe next month.

Today is my commute day. We leave Japan in about 6 hours, about midnight U.S. west coast time. I should be home by 9 pm, but who knows what exciting things might happen between now and then.