I mentioned previously that my OE trip was to start soon, implying that I was going to be commuting to my assigned base to start the trip. 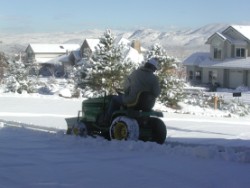 Since I was still officially in training the commute was for ‘company business’ and allowed me to book confirmed seats.  That meant I didn’t have to worry about getting a jumpseat or hoping that there was an empty seat left somewhere in the back of the plane. It also meant that to take advantage of the reserved seats I was going to have to do a 3-flight commute to get from my home to my base.

My plan was to leave  Reno at 6:30 on a Sunday morning and arrive at my base in the eastern U.S. that night in plenty of time for the start of my trip on Monday afternoon. Earlier in the week a winter storm passed through the area and dropped about 8” of snow at our house. It took a couple of tries, using both the blade on the front of our lawn tractor and a motorized snow thrower, but we got it all cleaned off the driveway. The city finally made a pass down our street about Wednesday and made the street passable, but it took 4-wheel drive to climb up the hill  leading out of the neighborhood.

I kept an eye on the weather and as luck would have it, another big storm was due to hit Friday night and continue through Sunday. Unfortunately this time the weatherperson was right. A heavy, wet snow started falling late Friday night. Saturday morning we cleaned  6-8 inches of new snow off the driveway and it was still accumulating.  That afternoon I plowed another 2-3 inches and hoped for the best.

At about 7 pm I called the local cab company to set up a 5 am pick-up for a ride to the airport. They said that because of the snow, they weren’t taking reservations or making any promises. That wasn’t good. Time for plan B.

I waited until 8:30 Saturday night to confirm that the plane I would take out the next morning had actually arrived at the airport to spend the night. The airport had  been closed part of the day for snow removal and low visibilities, so this was good news. That confirmed, I got my snow gear on and went out on the plow again. Another 4-5” had fallen, so I moved it around enough to make a path from the front door down to the street. We have a pretty steep driveway and no car was going to make it up to the door. Then I called the cab company back and told them to start a car on its way to our house. The estimate was 1-2 hours. Next I called a hotel across the street from the airport and asked if they had any rooms. I figured that they would in this economy and I was right. Plenty of rooms available. I took my time getting my uniform on, packed up my computer bag and sat at in my office waiting for the cab.

When I began my wait it was about an hour after I had ordered the cab, so I called back to see about the progress.  They called the driver and she said she’d be at the house in 10-15 minutes. Forty minutes later there was still no cab, so I called again. This time I was handed off to the chief dispatcher and then given the cell number of the driver.  The cab driver was lost.  At least she still had cell service. It turned out that she was in south Reno, which was good, but she was on the east side of the valley instead of the west side. It took about a half hour of turn by turn directions on the phone, but she finally made it to the end of our driveway.

There were several starts and stops, changed routes and lots of fishtailing, but we finally made our way back to the main N-S highway through town and to the airport hotel. At midnight I was at the check-in desk getting my room and arranging for a 4 am wake-up.

I had been planning on nice weather for my commute and had booked my first stop with a 45-minute plane change. My first good luck of the day was seeing that the 6:30 departure aircraft had been de-iced just before we boarded. Light snow was still coming down, but not enough to require another application of de-ice fluid. We pushed back, started and taxied out for an immediate take-off. We arrived at the gate at the boarding time for my second flight. I walked up to the next boarding gate as my row number was being called. Second lucky break.

I was smart enough to figure that pushing turn times twice was asking  too much, so I had planned a 2-hour break between my second and third flights. That gave me time to finally have something to eat other than peanuts and ginger crackers.  One food court lunch later I was an the boarding gate for the third flight.  Then, wonder of wonders, I got an upgrade to First Class.  It didn’t make a whole lot of difference on a one-hour flight, but the thought was there.  Instead of peanuts and a coke, I got a banana, crackers and a coke. Small pleasures.

Finally at my base on the opposite side of the country, I picked up my 8” stack of manual revisions and headed for another hotel room.  I grabbed a quick salad and a beer in the bar and then started in on my manuals. My trip wasn’t to start until mid-afternoon the next day so I had plenty of time for the updates, but I wanted to get this first step out of the way that night so I could do some studying the next day before report time. After all, this was going to be a training trip. My first look at the ‘real’ airplane was going to be a flight to Frankfurt, Germany.  All I needed was a reasonable night’s sleep…