If you are really a ‘flying nut’, can flying ever really get to be routine? I don’t think so, even though I used that phrase in my last post.

As the junior member of the crew on the flight back to the U.S., I drew the first break. On long-haul flights with aircraft that have two required crew members, there must be one additional pilot for flights over 8 hours and two additional pilots for flights over 12 hours. Although our flight was scheduled for 11:45, we were lucky enough to have four pilots, so we could split the flight time in half.

As I lay in the bunk trying to fall asleep, my mind reran the last post I made and settled in on that ‘routine’ phrase. I’ve been flying professionally for about 40 years, twenty in the milary and now 19, so far, with this carrier, but when I really stop and think about it, I am amazed that I continue to get paid to do something that I really love to do. Flying is inside of me and will always be part of what I do, whether it is for pay or for fun.

Having napped, read and napped my way through the first half of the flight, I entered the flight deck to begin my flight duty and I was greeted with this sight. 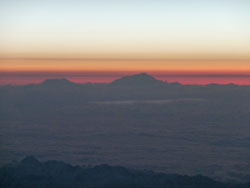 We were just NE of Anchorage at FL350. The sun was hiding just over the horizon and there was a layer of clouds below us with mountains poking up through them. The tall peak is Mt McKinley.

Normally the flight west-to-east is spent at least half in the dark. We take off at about 3 pm in Japan and land at about 3 pm in the U.S. This time of year, as the summer solstice approaches, the sun just barely disappears behind the horizon and twilight remains. The sun was rising again about a half hour after the photo was taken.

Sometimes you sit there at cruise altitude, making the occasional radio call and checking your fuel status and navigation progress and feel sort of bored. Then you get a view like this, one that only somebody who is flying can see, and you remember one of the reasons why you like aviation so much.

Flying may occasionally develop into a routine, but flying is never routine.