I went out flying yesterday, just a short flight to help a friend confirm the indicated airspeed he was reading on his recently completed RV-6A. I stopped and refueled after the flight, taxied back to the hangar and pushed the plane back into it’s parking spot. Just as I finished a stranger walked into the hangar and introduced himself. His name is Guy Keilman. His brother flies for the same airline that I do and mentioned that if Guy ever got to Stead airport he should look me up – that I have a Swift based there. Guy saw me taxi the Swift back to my hangar and was nice enough to walk up and say hi. 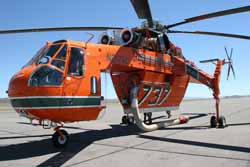 Guy is currently one of the pilots flying the Erickson Skycrane that is assigned to the Stead fire-fighting base this year. I say currently because he is actually assigned to fly from one of Erickson’s bases in Greece this summer. They operate on a 3-week cycle of work and free time and  just arrived back in the U.S. for his break. He was enroute to his home in Northern California when he got a call that they really needed him as a crew member at Stead for a few days. It was just a lucky coincidence that we met yesterday. We talked in the hangar for a while and then he said he’d be happy to give me a tour of the Skycrane. I jumped at the chance. Of course, I had to call my wife and let her know. She has watched the Skycranes operate from Stead for years and has always been fascinated with their size and capabilities. When she heard about the tour opportunity she dropped everything, jumped into the car and headed for the airport. If you are a Twitter user, you may recognize her as @yaksierra .

To say that the Skycrane is big is  a bit of an understatement. It is almost 90 feet long and it’s main rotor has a span of 72 feet – that’s twice the wing span of a C-172/182 or Beechcraft Bonanza.  Erickson names each of it’s Skycranes. The most famous is “Elvis” which made an appearance at EAA’s AirVenture last year (This year the crowd there is seeing “Goliath”). The Stead Skycrane this year is named “Malcolm.” 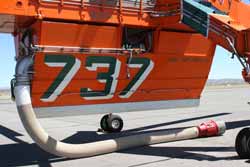 This photo is of the fire-fighting water tank that is attached in the area normally taken up by the winch/sling apparatus. As you can see, the tank holds up to 2650 U.S. gallons of water. The actual amount that they carry is dependent upon their fuel load, the temperature and the density altitude (sound familiar?). The fitting you can see in the middle of the aft ‘7’ is a fill valve for a 70-gallon foam tank. The foam can be injected into the water tank enroute to the fire. The foam is a detergent-based surfactant that, in effect, makes the water wetter.  The gray area at the bottom of the tank is one of the full-length doors in the fully open position.  The long hose is the pond snorkel. It has an electro-hydraulic pump at the bottom end that can suck water into the tank from any water source that is at least 18″ deep – and fill the tank in as little as 45 seconds. The tank can also be equipped with a sea snorkel that can be used to scoop up water while the Skycrane maintains forward motion – this eliminates the water spray up into the rotors that occurs when the filling process is done from a hover. The tank can also be filled with fire retardant very similar to that used by the fixed-wing tankers.  A control panel on the center console in the cockpit is used to set the amount and rate that the water is dumped.

There is also a water cannon that can be fitted to the left front of the Skycrane. It is capable of shooting a water stream up to 160′ to the front at a rate of 300 gallons/minute. It could be used to fight a fire in a high-rise building. You can see it demonstrated on the Erickson web site. 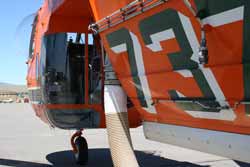 This photo shows the rearward-facing pilot seat. The crew complement for fire-fighting is two pilots, however when the mission is heavy-lift construction (placing large items on construction pads or erecting tall towers) a third pilot is added to the crew. This third pilot sits at a station to the rear and below the main pilots. There is a clear view from there of the load suspended from the hoist/winch. When the load is to be placed into position this rear-facing pilot takes control of the Skycrane and can position the load exactly where it needs to go. 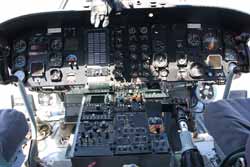 The Erickson fire fighting operation is day, VFR only which is reflected in the relatively sparse instrument panel that you find in the cockpit. Here you can see the control sticks (cyclic) at both seats and the collective for the right seat. One of those switches you see on the collective controls the pump at the end of the snorkel. The amount of water in the tank is indicated on a digital display in the top center of the left instrument panel. 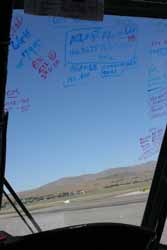 The center console is home to a lone Garmin 500 navigator and the VHF and FM radios. The FM communications band is used to talk with the fire fighters on the ground.  The right seat pilot on this crew used an ingenious method to keep track of all the information they needed when they were last dispatched to a fire. The bottom right block has all the Stead frequencies.

For those of you who subscribe to the idea that a helicopter is 10,000 parts flying in loose formation in an oil slick. Here is a photo of a large number of those parts – the main rotor mast head and transmission housing. 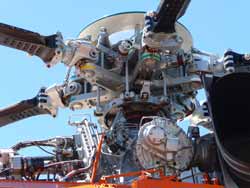 The bell housing in the bottom is where the rotating turbine shaft of the right engine is changed to the other-direction rotating, flapping, twisting, retreating and advancing motion it takes to keep a helicopter in the air. I am not a helicopter pilot but if I were that would still look terribly complicated to me.  Maybe some of you helicopter pilots out there can make sense of all those moving parts.