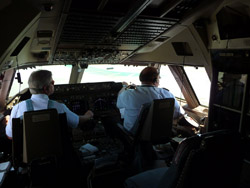 One of the nice things about flying the 747-400 is the high cruise speed.

When we are flight planned on one of the organized tracks or airways between  Alaska and Japan or from the U.S. West Coast and Japan we will quite often pass other aircraft.  Since the routes are all in RVSM airspace our vertical separation is usually 1000′ between aircraft. This an Airbus A-330 that we passed shortly after entering the airway between Alaska and Japan. The Boeing 747-400 cruises at .85-.86 mach.  The A-330 cruises at .82 mach.

It became obvious as we progressed along the airway that we were not alone on our assigned route. 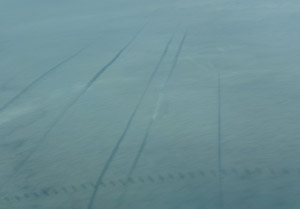 We gradually moved over a low overcast with the sun shining from above. What look like snowmobile tracks in  snow below us are actually shadows from the contrails along our track that are cast onto the cloud deck. There is no way to know how far ahead or at what altitude the other aircraft were flying.

Just about the time we crossed into Japanese airspace we passed another aircraft.

This one was 1000′ below us and was easily identified as a JAL Boeing 777. Their cruise speed is .83 mach. About a half hour after we passed the 777 we received a call from Japanese air traffic control. We were told to slow to mach .84 for traffic sequencing. Hmmm. Another example of the preferences given to the home airline. Not long after we slowed to .84 the JAL aircraft flew buy us cruising at least at .85. Their destination was also Tokyo’s Narita airport. I wish I could say that this was an isolated incident, but we get extended vectors or reduced speed all the time in order for JAL or one of the other Japanese airlines to land before us.

This last photo was taken while at the gate in Narita before we left to fly home. 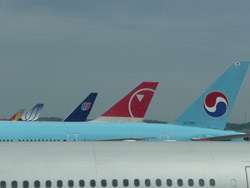 I thought it was a nice example of the different tails we see at the gates. I’ll let you figure out which airline logos they sport.

Overall, it was an enjoyable trip. One of the captains I worked with is four years into the building of an RV-10, so we had a lot to talk about. This week he is at EAA AirVenture trying to figure out what he is going to put into his instrument panel. Definitely ‘kid in a candy shop’ time for him.