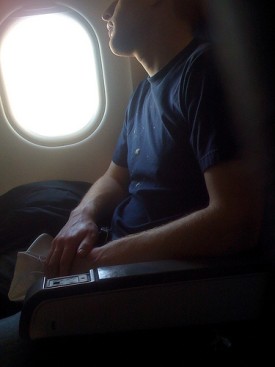 Since the not-yet-qualified captain was flying from the left seat, the captain I was flying with had to occupy the right seat. That put the FAA  in the jumpseat and left me not wanting to have anything to do with the “chain” of events.

In typical security fashion, the FAA representative was held at final clearing because he had only a regular passenger boarding pass and  his name was not on the official crew list. The security personnel were not allowing him to board the airplane until they started loading passengers. That gave me enough time to make sure that all the normal first officer preflight duties were being completed. The job is not rocket science, but if you are forced to occupy an unfamiliar seat, it takes a little while to remember the correct flow patterns and duties, especially when you add the complexity and pressure of the evaluations. I wanted to watch and make sure the ‘new first officer’ got it all completed before the FAA arrived to look things over. Once I was satisfied that things were progressing normally in the cockpit, I went outside and conducted the exterior preflight, checked that all was going well in the cabin, and made sure that the Purser (lead flight attendant)  was aware that we would have a fairly short taxi time to the end of the runway. Once all that was completed I went back to the cockpit,  gave a status report, passed along my best wishes for a successful checkride and promptly left to claim my passenger seat downstairs. Downstairs sounds funny when you’re referring to an airplane, doesn’t  it? We could go another step in that direction, too. There’s a hatch near the front left main cabin door that allows access to the electrical and electronics (e & e) compartment below the main deck floor – the basement. Yeah, big airplane.

So, I spent the flight having a nice (for airplane food) breakfast and reading a couple of magazines I had brought with me. It got a little bumpy on the descent for landing and you could tell it was making them work for that nice landing. Overall, I had a nice flight, though may have been a little more enjoyable  if I hadn’t gotten up at 3 am.

The captain survived the daisy chain and the FAA inspector moved on to his next victim evaluation on the way to U.S. about 3 hours after we landed in Tokyo. The captain and I headed for our layover hotel and agreed to meet in the lobby to go out for dinner. At the appointed hour we headed down the street to the ‘Green Awning.” The Green Awning is a restaurant a couple of blocks down the street from the hotel. It serves typical Japanese fare cooked on grills placed in a U-shaped arrangement with a counter and chairs on the perimeter. The restaurant caters primarily to the flight crews staying in the hotels nearby. The walls are decorated with rows of polaroid photos of crewmembers enjoying their dinners and drinks. This particular restaurant was formerly known as the “Yellow Awning” but it was sold and the new owners remodeled. The real name is “Imari’s” but it’s much easier to give directions by saying to cross the main street and walk down to the left until you get to the green awning. You adapt to foreign locations any way that you can.

Next we will be  joined by another first officer for our 9 1/2 hour flight to LAX.