Let’s See, What else could we put in it? 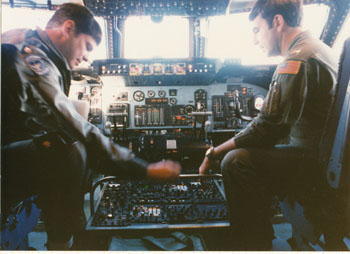 The C-5 was the first Jumbo-sized aircraft to be built and, unfortunately, the designers tried to include everything that anybody would ever want in a cargo aircraft.

It originally had a built-in weight & balance system that used strain gauges on the landing gear legs. The weight measured on each landing gear leg was used to determine the total weight of the aircraft while it sat on the ramp and then used the individual readings to calculate the actual aircraft center of gravity. Unfortunately, the system didn’t work quite the way that the engineers had intended. It seems that the computer logic was unable to adjust for uneven parking ramps and it was unable to understand why the readings kept changing when the aircraft was rocked by the wind. The system was eventually disabled.

Another of the capabilities that was designed into the plane was the ability to operate on “unprepared surfaces.”  I remember hearing that the Edwards test pilots taxied the plane over dirt, gravel and stump-covered fields during the ground test phase. There was a system on the plane that allowed the crew to set a lower than normal tire pressure that would be suitable for the landing surface at their destination. They could take off from a normal runway and then, while in flight, decrease to tire pressure to the preset value for the landing. One of the sources listed below says that the system was then able to re-inflate the tires, but that wasn’t a capability of the system.

To take care of the re-inflation chore, the C-5 had a low pressure air compressor operated from the right forward main wheel well. The system used a turbo compressor powered by bleed air. It provided up to 150 psi air to be used to inflate the tires. Hoses and inflation fittings were stowed in a bin in the cargo compartment.

The ability to operate on unprepared surfaces was nice to have, but it would take major command approval to take the plane off-road. In normal operations, anyone letting a tire run off the pavement was risking their aircraft qualification and was almost assured of receiving “additional training.”

The most complicated system, however, was the landing gear.
Landing Gear Basics

The C-5 has a nose gear with four tires and two sets of main gear positioned one directly behind the other. The main gear “trucks” are fitted with six tires each, two in front of the strut and four behind. There are a total of 28 tires, all the same size. 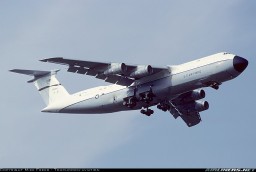 Making turns on the ground

This type of main landing gear arrangement, with the two sets of main gear in tandem,  makes it difficult to turn sharp corners. To fix that problem, the aft set of main gear is allowed to “hook-and-ladder” during turns. This is controlled by a switch on the center console in the cockpit operated by the copilot as directed by the aircraft commander. In a left turn the aircraft is started into the turn, the aircraft commander calls “caster” and the switch is opened allowing the aft set of gear to turn right, swinging the tail of the aircraft around the turn. As the aircraft starts to roll out of the turn, “center” is commanded, the switch is closed and the aft main gear are hydraulically driven back to line up with the forward main gear.

The C-5 has the ability to “kneel” on it’s landing gear. That is, it can lower itself so that the cargo deck floor is closer to the ground.  It was made to do this for two reasons. First, when kneeled in the level position the cargo deck is just about six feet off the ground, referred to as truck bed height, making it easier to load palletized cargo.  Second, if the cargo deck was not lowered, the ramps from the deck to the ground would have a crown at the top that would prevent normal vehicles from driving into the cargo compartment because they would “high center” on the crown. The aircraft can also be kneeled with the front end down or the aft end down, used if the cargo load is made up of only rolling stock that can drive or be winched up the ramps.

When the aircraft first entered service the kneeling system was pneumatic, operated by high-pressure air. However, it didn’t take much operational experience to realize that the C-5 operating environment was not friendly to air-tight seals.  The kneeling system was quickly changed over to a hydraulically operated system which has been much more reliable.

In order to retract the main gear into the aircraft without losing cargo compartment area, the wheelwells were located in pods on the bottom portion of the fuselage.  The landing gear trucks are so big, however, they can’t just be swung inboard and stowed. The engineering solution was to first rotate the main gear inboard, then tuck the trucks in a flat position up against the bottom of the fuselage. That meant that when the gear handle is raised, there must be a braking system to stop the main gear rotation. Each tire is a huge gyroscope and if you put force on a spinning gyroscope (such as rotating it inboard) an equally strong force is generated in a totally different direction. I was told that they almost lost control of a C-5 during flight testing when they tried to retract the gear without first stopping the tire rotation because the gyroscopic forces were so strong.

The A-model C-5 was built with crosswind gear capability. 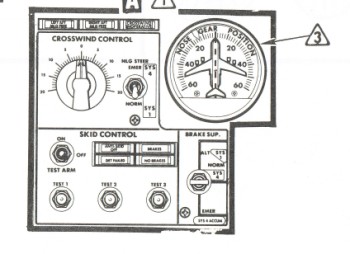 I believe that this capability has been removed from all the remaining A-model aircraft. The B-model was built without crosswind gear. I only remember using the function about four times in my eight years of flying the C-5, but the mission could not have been completed had it not been available. Apparently the upkeep vs. usage ratio was too great to keep it installed. Once the landing gear was extended the dial on the control panel (shown here) was turned a certain number of degrees based upon the crosswind component and the approach speed. Up to 20 degrees of correction could be used (even though the gauge shows marks up to 60 degrees the crosswind control knob has a 20 degree maximum). This allowed the aircraft to be crabbed into the wind while the wheels (nose and all mains) were aimed straight down the runway. Landing while aimed 20 degrees off the runway heading is an odd feeling but it gets really weird when it’s time to lower the nose to the runway. You have a really strong desire to point the airplane down the runway when you lower the nose. When the aircraft was slowed to about 5 knots during the landing roll, the dial was slowly rotated back to the zero position and the fuselage rotated back to align with the landing gear. That was another weird sensation while you were trying to taxi in a straight line.

Another capability initially installed that has since been removed was a High Pressure Air Compressor driven by hydraulic pressure. It provided 3000 psi air to inflate the landing gear struts. There is a sextant port in the cockpit however,  navigators were phased out unless the mission included an airdrop. Now one of the loadmasters usually uses the sextant port in flight. A hose is connected to the sextant port and the lower pressure outside the aircraft serves to act as a vacuum to clean up the flight deck.

Other interesting features still in use include one of the first uses of  “active flight controls,” called the Active Lift Distribution Control System (ALDCS). Sensors monitor flight control positions (aileron, elevator, rudder and flight spoilers) and wind gust loads on the aircraft and automatically position the control surfaces to reduce the bending loads on the wings.

A Ram Air Turbine (RAT) is installed on the left side of the aircraft just forward of the landing gear to be used as an emergency source of electrical and hydraulic power.

The empty area in the fuel tanks above the fuel is flooded with nitrogen to reduce the fire potential. Nitrogen is also used for fire suppression in inaccessible places like the wheelwells . This has, on occasion, come in handy when doing a fly-by at an airshow. If the wheelwell nitrogen fire supression system is activated when the gear is extended the resultant white cloud of gaseous nitrogen coming out of the wheelwell can suffice for a “smoke system.”  So I’m told…

And the C-5 is capable of being refueled in flight. The intent was to be able to put whatever cargo you needed to move into the cargo compartment, then fill the fuel tanks with enough fuel to put the aircraft at maximum gross weight. Then, if that was not enough fuel to reach the destination, an air refueling was planned enroute.

We’ll talk more about the air refueling capability in the next chapter.