In part one of this two-part series on spin training in the Cessna T-37 I covered some of the spin characteristics of the T-37 and the six-step procedure that we used to recover from an established spin. 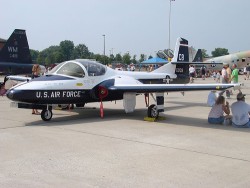 I didn’t address the aerodynamics of spins, since there are several other sites which cover that subject in detail as well as entire flight courses dedicated to spins. Wikipedia covers spins here , and Rich Stowell’s Stall/Spin Awareness Training is described here. My Google search also found an online aviation book by John Decker that has a very good description of stalls and spins.

I left off Part I with a comment about an ‘unusual attitude’ I experienced during one of my spin training sessions.

Unlike some civilian flight schools where students are assigned to instructors in an effort to even the workload (and income), the student/instructor pairing at UPT is done by an analysis of the student’s performance in the previous phase of training. Stronger students were placed with the newer instructors and weaker students were placed with instructors with more experience. That meant that the longer that you were an instructor the worse your students became. The pilot screening process weeded out the really weak flyers, but there were always some individuals that took just a little bit longer or a needed little more help to see the big picture. By the time I had been instructing for three years, I was not being assigned the top members of the UPT class. I looked forward to the challenges but some days it was just plain frustrating. Then on this particular day one of the newer instructors in our flight called in sick and I filled in for a day instructing with one of the better students in the class. And it was spin training day.

We went through all the ground briefings and he seemed to have an entry-level understanding of the aerodynamics of the spin and a good handle on the entry and recovery procedures. With the ground training covered, we made our way to the equipment room to pick up our flight gear and headed for the airplane. The departure went fine and as we exited the airport area we contacted the controller to obtain a practice area assignment.  At that time the practice areas for the T-37 fanned out to the north of the airport. I don’t remember how many there were, but they were fairly large and were segmented into high and low areas with the bottom of the low area at 10,000′ MSL and the top of the high area at 25,000′ MSL.  You could be assigned just the low or high segments or you could get both, depending on the practice area traffic.

We were assigned a high area that day, called entering the area and proceeded to climb up to 22,000 ft to begin our spin training. I demonstrated the first spin and recovery, talking our way through the steps and pointing out the aircraft reactions to each step. The student seemed to be following along and responded to the occasional question. After the demonstration we worked our way back up to the top of the area. Now it was the student’s turn to give it a try. Since I had not flown with this student before and since it was his first attempt I was very alert to what may or may not happen. His spin entry went fine and the aircraft was reacting in a predictable manner as it stabilized in the spin. After a couple of turns I gave the ‘Recover’ command and the student performed the recovery almost perfectly. Great! It was going to be a really nice day of flying. Back up to the top of the area to try another one. I was relaxed. Boy was that the wrong thing to do…..

Second try. The spin entry was fine, the spin developed and I again gave the command to recover. He did a great job right up to step 6. If you remember from Part I, step 5 is when you apply full forward stick to break the stall and step 6 is when you recover from the vertical dive that resulted from step 5. Without step 6 the controls are positioned so that the throttles are at idle, the rudder is at the full limit opposite the spin direction and the control stick is full forward. If you leave the controls there the aircraft pitches down and through vertical and back up to the horizon to put you inverted and in an aerodynamic stall with full rudder applied. You now find yourself in an opposite direction inverted spin.

As an instructor, you really should not ever let a student surprise you this much. I came back to full alert and instinctively grabbed the throttles and the stick and said ‘I have the aircraft.’  First challenge. In the cockpit photo shown in Part I, you can see that both seats in the T-37 operate with right-handed stick and left-handed throttle. There is a difference between the students throttles and the instructors throttles. The instructor’s set has the cut-off feature that shuts down the engine, accomplished by lifting the throttles up and back over the idle stop. On the ground or in normal flight, there has to be a conscious effort to raise the throttles. However, when you are inverted and you grab the throttles the weight of your arm will very easily pull the throttles up (down?) and aft. So, now I found myself inverted, rotating and watching the engines spool down.

When faced with multiple, overlapping emergencies you have to be able to prioritize. One way to do that is to determine which of the problems will kill you first.  I knew that the airplane was not going to come out of the inverted spin by itself and I knew that it was only going to take about another minute and half to reach the ground, so that project seemed to jump out into the lead. As I said in the last episode, the first three steps of the spin recovery are designed to stabilize the spin so that the remaining steps are accomplished from the same point each time. I centered the rudder and abruptly applied full back stick. That caused the aircraft to flip right-side-up and continue it’s spin from there. Things were now looking a bit more familiar. I methodically accomplished the remainder of the recovery steps and the plane came out of the spin gliding happily toward the bottom of our assigned area.

The next situation  to consider was the possibility of running into traffic occupying the lower part of our practice area. I called the area controller and asked for the lower area in addition to our assigned upper area. We were about 1000′ from the bottom of our allotted airspace and would probably go into the lower area before we got an engine started. I managed to get the request out to the controller, but just after that the aircraft generators went off line due to the winding down of the engines. We no longer had radios to hear the reply and no longer had a working transponder that allowed the controller to see us. The only way to fix that was to restart the engines, our next project.

I had the student get out his checklist and read off the steps necessary to do an in-flight restart…twice.  Both of the engines restarted and as the engines spooled up the generators came back on line. Our headsets were filled with radio calls from the area controller looking for a response from us. The controller had replied to our lower area request, was getting no response from us and had lost our radar return.  They were starting to think about the possibility that they had lost an airplane. There was audible relief in the controllers voice when we finally responded. It turned out that the lower portion of our practice area was not being used and the controller assigned the airspace to us. We had descended about 1500′ into the lower area and were beginning to climb back up as fast as we could. Instead we leveled off and thought about what to do next.  Both the student and I were a little unsettled, so we leveled off and just flew around the practice area for a while to relax. Then I transferred the controls to the student and had him fly us back to the airport and enter the pattern for a full-stop landing. We called the lesson incomplete and rescheduled it the the next day.

What had I learned by the end of that day? First, as an instructor, don’t for a minute believe that just because a student shows strong capabilities one minute that they can’t have total brain fade the next and give you one of your worst nightmares. Second, at any level of your flying career,  if you find yourself facing multiple emergencies/failures/situations prioritize the individual problems and start methodically working through the list.  You will eventually reach a point where things look familiar, the problems have been resolved or you are able to live with what remains.