Air Refueling the C-5, Moving In

We left off with the receiver in the pre-contact position with both aircraft ready to conduct air refueling. 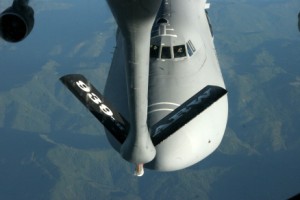 There is a centerline stripe painted on the bottom of the tanker to help with alignment as you move into the contact position. The boom operator “flies” the boom with the two wings shown in the photo, moving it left or right and up and down through an arc. The inner portion of boom telescopes out to press into the refueling receptacle. 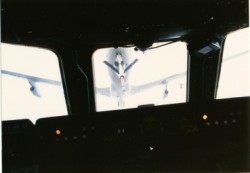 The bottom of the tanker has two rows of indicator lights, one on either side of the centerline stripe. In the photos they look like dark bars. These lights provide an indication of the receiver position with respect to the ideal refueling position. There is a “box” of airspace that the receiver must remain within. The box dimensions are determined by the lateral and vertical limits of movement of the refueling boom and the limits of the extension and retraction of the inner portion of the boom. If you are the refueling pilot and sitting in the left seat it is easy to think of the left row of indicator lights being controlled by your left hand (the yolk moving the aircraft up or down) and the right row of lights being controlled by your right hand (throttle moving the aircraft forward or aft). This is not completely true, of course, because the arc movement of the boom means a movement forward will not only compress the boom, but cause it to move downward in the arc. It is a good generalization, though. As I remember, each end of the light bar (forward and aft) has a red light, meaning you are nearing a disconnect. Then there are three or four amber lights on each side of a center green light. The center of the refueling envelope is attained when you have two green lights illuminated, one on each set of lights. Until the boom is latched into the refueling receptacle, the indicator lights are manually controlled by the boom operator.

As the receiver gets close to the center of the refueling envelope the boom operator flies the boom toward the air refueling receptacle opening. 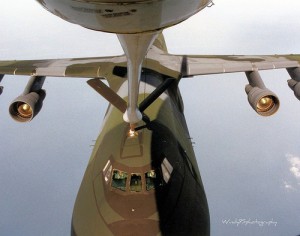 When the receiver gets into position, the boom operator extends the inner portion of the boom, “sticking” the boom into the receptacle. Induction coils in the end of the boom generate an electrical signal in the C-5 receptacle which signals the latches to close on the end of the boom, holding it in position. The indicator lights in both aircraft then change from “Ready” to “Latched,”  the tanker is able to “pass gas” to the receiver and the position indicator lights are controlled by the actual boom position.

Training flights were normally planned to take on a 20,000-lb. (about 3000 gallons) fuel transfer. That is just about an hour of flight time at the typical C-5 burn rate and was done to keep all the systems exercised. On an operational mission a transfer of as much as 100,000 lbs. (about 15,000 gallons) might be necessary and could take as long as a half an hour in the contact position.

If the C-5 were to move out of the air refueling envelope, sensors monitoring the boom position would, through the same coils that triggered the latches to close, signal the boom latches to open and a “disconnect” would be indicated by the lights and announced verbally. It is also possible for both the pilot and the boom operator to direct the latches to open through their respective disconnect switches. The pilot’s disconnect switch is on the outboard handle of the control yolk. 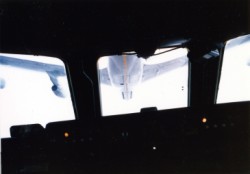 There is also an emergency procedure called a “Breakaway” that can be directed by either the boom operator or the receiver pilot. The Breakaway is used when either aircraft detects a potentially dangerous situation developing which may result in contact between the two aircraft. During a breakaway maneuver the boom operator and receiver pilot will both push their disconnect buttons. The tanker will apply full power and climb to the top of the refueling block (1000′) and the receiver will reduce power to idle and push over to descend to the bottom of the refueling block (1000′). Once both aircraft are stabilized and if no damage has been done to the boom or receiver receptacle, the tanker will descend to the refueling altitude and, once stable, will clear the receiver to the pre-contact position to begin the refueling procedure again. The breakaway maneuver was practiced on each training flight.

Air Refueling is normally accomplished with the C-5 being hand-flown and the KC-135 being flown on its autopilot. When C-5s first began conducting regular air refueling missions it became obvious that the KC-135 elevator trim system was incapable of keeping up with the pitch changes experienced as the C-5 moved into the contact position. The extreme size of the C-5 and the large, blunt nose cause a huge bow wave of air to be pushed in front of the plane. As the C-5 got closer to the tanker, the bow wave would push the tail of the tanker up, forcing the autopilot to trim to maintain altitude. If the C-5 moved in too fast, the trim motors were not able to operate fast enough to reduce the aerodynamic forces and the autopilot would disconnect. Eventually the trim system was modified to allow a greater trim rate. Here is a comment about this from a military forum member named KC135TopBoom:

If the C-5 moved rapidly in or out of the contact position, the KC-135 was in for a wild ride, as it would be very difficult for the tanker pilots to keep up with the trim changes. The old autopilot couldn’t keep up, either. But, the pilots were good enough to avoid a collision. Crew coordination was critical here. The Boom Operator would count down the C-5 approach from pre-contact to contact (measured to the receiver receptacle), 40′, 30′ 20′ 10′ contact, over interphone. We did that with all receivers, but it was critical with the C-5 to keep up with trim forces. But a procedure unique to the C-5 refueling was when he backed out of the contact position, we counted him out, 10′, 20′ 30′ 40′. With each call over interphone you could feel and hear the trim motor turning while you were in the Boom Pod.

When we refueled behind a KC-10 tanker, this was not a problem possibly due to the relative sizes of the aircraft or due to upgraded trim systems. Instead, we found that when approaching the contact position behind a KC-10 we had to remain low until we got closer to the tanker and and then climb up into position at a steeper angle than with a KC-135. We found that if we used the same approach angle with the KC-10 as with a KC-135, the C-5’s t-tail would enter the turbulent exhaust of the KC-10’s center engine. Other than that, the KC-10 was a much more stable refueling platform.

Successfully completing your first operational air refueling mission gives you a very strong sense of accomplishment, very similar to that feeling you got when you first soloed an aircraft, except that this time there are two airplanes full of people sharing the event. No pressure there at all.