The last two posts covered all the procedural steps necessary to accomplish an air refueling mission or qualification.  Completing an AR mission is an exercise in flying formation with another aircraft, specifically in close trail formation. 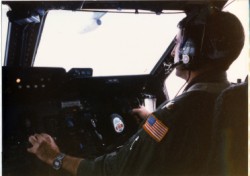 Just as in any other formation flying, maintaining position involves recognizing relative movement between the airplanes and managing the momentum of aircraft movement. Obviously, the bigger the airplane, the more momentum is involved. I was also an instructor in the USAF Undergraduate Pilot Training (UPT) program, teaching in the Cessna T-37, a small, 2-seat jet. Formation training was part of the flight syllabus and was usually the first time that the student had the opportunity to get close to another aircraft in flight. The skill sets required to fly formation in the T-37 and to air refuel in the C-5 are very similar, though with the C-5 you have to be more patient with power changes. The C-5’s flight controls are quick for an aircraft of it’s size and the engines are powerful enough that power changes, once in position,  rarely require more movement than 1/2 to 3/4 throttle knob width. Pilots new to air refueling or to formation flying in general have a tendency to make corrections that last too long. When in close proximity to another aircraft heading changes of one or two degrees are all that are needed to see movement. You have to make a concerted effort to barely change bank angle and then level the wings again to make a lateral position correction. Just a little rotational pressure on the yolk is used rather than actually rotating it to see a bank angle change. Power changes need time to take effect. If you get impatient and make an additional power correction before the first one has time to take effect, you end up with at least twice the power change that you need. Soon you find yourself fighting your own corrections.

I spent most of my last four years in the Air Force teaching or evaluating pilots while air refueling.  Most of the missions were fairly routine, but every once in a while we’d have an interesting time trying to complete a training mission.

Shortly after they first started painting the C-5 in the dark camouflage colors (mottled dark greens and blacks) I was on a night air refueling training flight. It was a dark night with no moon and we were flying over a lower cloud deck, so the ground lights were not visible. All our checklists we completed and we had been cleared into position. We were nearing the contact position, but were a little low compared to the normal line of approach so I told the student to move up a little. He was making a nice correction when suddenly the boom operator called a breakaway. We started our descent and the tanker started pulling away in a climb when a different voice came on the radio and said to terminate the breakaway. We stopped our descent at 500′ low and the tanker slowly descended back to the air refueling altitude while we maintained visual separation. The new voice came back on the radio and apologized for the breakaway call. It was the boom operator instructor talking. He explained that the student had never refueled a C-5 and with the dark paint and dark night, he did not see the aircraft until we were almost into the contact position and it looked so big in his refueling window that he thought it was about to hit the tanker.  A huge black aircraft had just appeared out of the darkness and startled him. He did exactly what he should have, I could not fault him for that. After the end of our training session he would have much more experience and would know what to look for on future flights. We talked to the boom instructor a little more as we progressed down the refueling track and learned that this wasn’t an isolated incident, especially for night refueling.

On another flight, this time a daylight trainer, I was paired with two fairly good students, late in their training program. We were on an east-west air refueling track that ran through the center of Kansas with one end just north of Kansas City.  I can’t remember the altitude that were using, but it was usually somewhere in the low 20’s. We were in the contact position, headed east, near the end of the track. I could see a huge thunderstorm off to the south of us with the top of the anvil extending north and crossing the refueling track just a little above our altitude. I made a comment to the tanker pilot, that it wasn’t necessary to go all the way to the end of the track before he made the turn. (We often run up and down the track a couple of times during a training mission, staying in the contact position during the 180-degree turn for practice.) Apparently the tanker crew didn’t think the overhang would cause a problem because they continued on the track centerline. As a precaution, I took control of the aircraft just before we reached the anvil extension. I disconnected from the boom and told the boom operator that I was just going to back out a few feet as a precaution. We were sitting there just aft of boom with the boom sitting about even with the top of our cockpit. As we entered the bottom of the anvil’s whispy clouds I could see static electricity starting to build up around our cockpit window frame. Little blue discharges were dancing around the corners of the windows. Just then a standing static discharge  formed and connected the bottom of the air refueling boom with the center post of our windshield. It was a really beautiful sight, but I could almost hear the boom operator yelling to his tanker pilot. They immediately added power and rolled into a 30-degree banked turn to the left. I fell a little farther aft as they added power and the static discharge dissipated, not having enough energy to bridge the larger space between the planes. We rolled out on the track heading west and continued the mission. Neither crew mentioned it again, but the next time we got to the east end of the track, the tanker pilot made the turn well short of the overhanging cloud.

The last ‘fun’ experience I’ll relate also involved thunderstorms. This time we were on a north-south track, I don’t remember the exact location. It was a night air refueling training mission and the flight had been going fairly smoothly. Once the air refueling rendezvous is completed, the receiver sets the aircraft radar system in the standby mode so that it does not radiate energy toward the tanker. It then becomes the tanker crew’s responsibility to provide weather avoidance. I knew from the weather briefing we received before our flight that thunderstorms were forecast at the northern end of our track but that they should be widely scattered. As we got farther north I could see lightning flashes in my peripheral vision while we were in the contact position and assumed that the storms were far enough away to not be a factor since the tanker was continuing down the track. I asked the tanker how the track looked farther north with reference to the storms and mentioned that we could just shorten the track if they were going to be a problem. I didn’t get a response and figured that they were taking a closer look at their weather radar before making a decision.

Suddenly the boom operator called a breakaway and the tanker pushed in the power, climbed, turned and disappeared. I was forced to reduce power and descend, radar off, into a nest of storms. The tanker had taken us into what appeared to be a blind alley between storms, decided they couldn’t continue and elected to exit the area as quickly as they could. We turned on our radar and waited what seemed like forever for it to make a couple of sweeps and to give us a picture of where we were and how we could exit the area. There appeared to be a small opening between storms about 45 degrees to our right, so I headed that way, lightning all around us. I’m not sure why we didn’t take at least one strike somewhere on the plane. We were bounced around and found moderate rain, but eventually made it back to the track. I had a very short conversation with the tanker and decided that by the time we got together again we would be at the opposite end of the track. This mission was planned with two different tankers. We had been working with the first one for one trip back and forth on the track, then were to rendezvous with the second tanker for another circuit. I said not-so-fond farewells to the first tanker and headed for the ARIP to begin the second rendezvous. We briefed the second tanker crew on the weather on the north end of the track and made sure they understood to turn well short of the weather.

When you are the leader of a formation, whether it is an air refueling, a tactical formation or just out having fun with your friends, your primary job is to insure the safety of the other planes with you. You must plan much farther ahead than you normally do because it is going to take longer to move a formation than a single plane. If you see traffic or some other hazard you can’t just roll into a 45 degree bank and dive or climb to avoid the hazard because the other planes in the formation will not be able to follow you. Being a formation lead is as much mental work as flying on the wing or boom is hand-eye work.