Repairing and maintaining an airplane.

Back in the Air

I mentioned in Friday’s article that I had flown the Swift early last week – before the major cold front blew through the area.  I had planned on flying sooner but ran into a maintenance problem that caused a few days of delay. 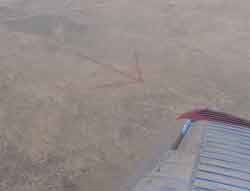 I pulled the plane out of the hangar after my preflight, got in and prepared to start the engine. I turned on the master switch and immediately got all the landing gear warning lights, the gear-unsafe buzzer and an operating hydraulic pump. (This plane has a red light and a buzzer that come on if the landing gear has not activated the down position micro-switches and the throttle is at idle – and the hydraulic pump will run as long as the gear handle is down and the micro-switches are not activated.)

I immediately turned off the master switch, then carefully got out of the plane and inspected the landing gear positions again – I had checked that they were safely down and locked during the preflight.  All looked good to me but something was obviously wrong. I put the plane back in the hangar and up on jacks to test everything again.

With the jacks in place and the tires 2″ off the ground I got into the plane and turned on the master switch again. Everything was normal – no lights, buzzer or hydraulic pump running. Hmmm.  I hate intermittent electrical problems.

After running the gear up and down a few times and pushing and pulling on the retraction mechanisms of both gear with and without hydraulic pressure on the system I found that without pressure in the extension direction the right landing gear could be moved about 1/16″ toward the retract position. That was enough to allow the micro-switch on that gear to indicate unsafe but not enough to actually make the gear unsafe – the hydraulic downlock was still engaged and the mechanism was over-center in the down direction. After sitting for a few days the hydraulic pressure had bled off in the system and moving the plane out of the hangar had put enough side force on the gear to move it off of that micro-switch.

There are recurring Airworthiness Directives(ADs) on the landing gear requiring checking several dimensions for wear. I checked all those again and found all to be within limits. The only thing left to do was to check the micro-switch itself. When I took it out to look it over the switch came apart in my hand. Hmmm, I think I had found the problem.

Luckily, Don at The Aeroplane Factory had a spare used switch that he could loan me to get back into the air. I picked that up the next day, installed it, checked all the AD dimensions again, ran the gear up and down and checked the emergency extension system again (I pretty much did another annual inspection on the landing gear). All was back to normal. 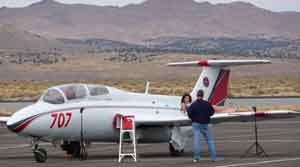 The next day was clear with light winds and about 58 degrees. A little chilly for a bikini, but great for flying. I’m not sure what the occasion was for the photo shoot – probably a calendar or something.  They were out there for about four hours.

I took the photo at the top of the page while I was flying north of Stead. the arrow appears to be drawn with fire retardant. I points to the south face of a ridgeline that has a fairly large burn area on the north side, out of view of the arrow. I’m assuming that it was drawn to aid in the fire-fighting efforts.

Yesterday I got a package from the Swift Association Parts Store with four new-manufacture micro-switches. When the weather turns warm, I’ll replace all of the one’s currently installed – two main landing gear, each with a switch for the extended position and the retracted position.

Another cold front is supposed to come through today – winds only in the 35MPH range this time. Slide Mountain (between Reno and Carson City)  is currently averaging winds of 50 MPH with gusts to 78. Probably pretty bumpy once you get above the ridges.

I haven’t had any actual flying posts lately because I haven’t been flying.  It’s the time of year that the Swift’s annual inspection is due – the end of October to be exact.  I started the inspection a couple of weeks ago and was promptly sidetracked by other projects at home.

So far I have completed the exterior of the tail and the inside of the aft fuselage. Panels are coming off and control bearing lubrication is underway. Lots of little things to do.

And now the transponder/encoder check has expired, so that’s on the list, too.  I’d much rather be flying, but heaven forbid if  all the boxes aren’t checked when I do.

A friend sent the link to this video today. I though I’d embed it in this post so you can watch it. Very well done. 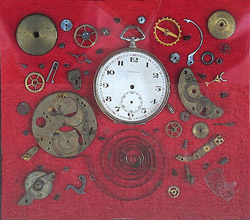