Once in a while it’s nice to take a break from whatever is going on in your own hangar and go visit some of the other hangars on the airport. It’s a good way to learn some new tricks and an easy way to spend some time talking airplanes and flying. I stop by the hangar across and down the row from me fairly often…..

This hangar is a nice cinder block affair measuring 120′ x 100′ (36.5m x 30.5m). It is owned jointly by two individuals. One side is filled with airplanes and the other is filled with cars.

The Airplane Side of the hangar

The airplane showing behind the fork lift is an L-39 Albatross with a blue/gray camouflage paint scheme. If you are a regular attendee at the Reno Air Races, this plane was flown by Hoot Gibson the first year that they had a jet racing class. 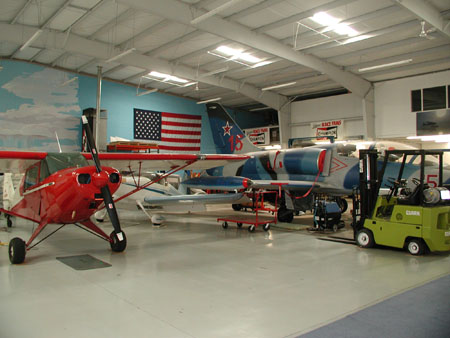 Unfortunately, I haven’t seen it move for about 3 years. The owner lives about an hour away, received a checkout and is qualified to fly it, but chooses not to for some reason.

The red taildragger is a Piper Pacer. Behind it is a Van’s RV-6. There is also a Piper SuperCub out of sight to the left. These are all owned by the same person. He and his wife spend their summers at their cabin in Alaska. He is also building a Van’s RV-7 that is in his workshop off to the left of the photo.

The Car Side of the hangar

I’m never sure what I’ll find on this side of the hangar. 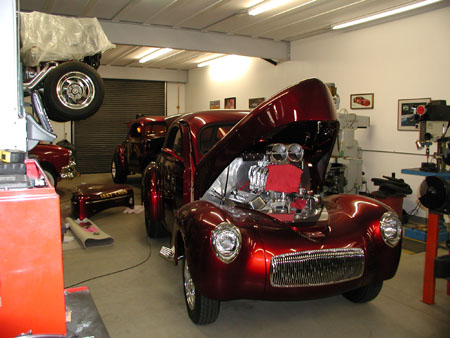 Right now what you see in the hangar is a Willys Street Rod that was built up by the hangar occupant for an individual who lives in town. When it was finished, they took it to a car show in Los Angeles, CA and came back with the trophy for Best Hot Rod of the show. This one was built to be a ‘driver,’ meaning that it is legal to operate on city streets. The engine was built up so that it will run smoothly at low power settings and will not overheat. The huge blower that you see on the top of the engine is actually hollow. A carburetor is installed inside of the blower housing (not visible behind the red shop rag).

Just as they were finishing this Willys, the original version of the car came on the market and the owner of this one, bought it. That’s the one visible in the rear of this picture and featured in the next shot. 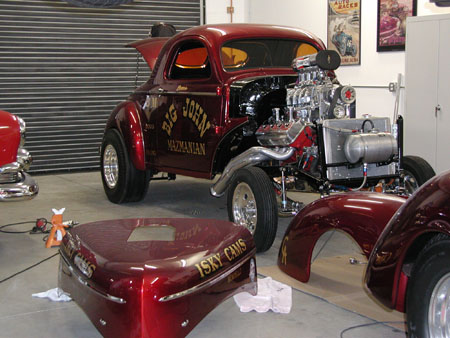 This, as I understand, is considered to be the original 1960’s Drag Racer of John Mazmanian. The actual original racer was destroyed, but this one was built by the same mechanics to be as close to the original car as possible. You can see that the trunk lid is up and there is a black bag sitting on it. That is the storage location for the drag chute.  The owner has had it out driving around on the airport and it is definitely loud and neither legal nor practical for street use. Because of the way that the fuel control is built, the car is either idling very loudly or running full out. There is very little room for varying the power output. A true drag racer.

There are always three or four cars under construction or modification in this hangar. Watching these guys methodically work on the cars and the quality of the work that they do always inspires me to do better work when I get back to my own projects. Good just isn’t good enough after you work with them for a while.