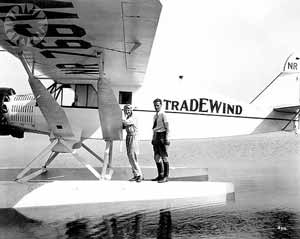 Continental-United Merger hits the bumpy part of the road.
Pilots from both Continental and United are represented by the Airline Pilots Association (ALPA), however their collective bargaining agreements contain very different work rules. The new company management tried to take advantage of those differences, were challenged by the Continental pilots and lost in arbitration.

Where would you expect to find the oldest flying Boeing 747?
Trans World Airlines (TWA) took delivery of N93101 in 1970 but only flew it five years. That airplane is still flying today.

An FAA magazine celebrates it’s 50th year of publication.
The FAA began publishing a magazine called FAA Aviation News in January 1961, three years after the creation of the administration. It originally was intended to give readers insight into the FAA’s policies and programs, concentrating on safety awareness and education. The publication is now named FAA Safety Briefing, a more apt title for it’s primary purpose. The Jan/Feb 2011 issue celebrates the publications 50th Anniversary. The magazine is well worth reading and is available either in PDF format or in print form. You can also download selected articles from an issue.

Pilot Training Reform Symposium to be held in May 2011
The Society of Aviation and Flight Educators (SAFE) is chairing a symposium on pilot training reform to be held in Atlanta, GA on May4-5, 2011. It will be held in the Crowne Plaza Hotel at the Atlanta International Airport. The symposium is intended to be a collaborative effort among OEMs, courseware providers, organizations/trade associations, university aviation programs and FBOs, insurance providers, and regulatory agencies to reform our national flight training system.

General aviation, social media and collaborative consumption
This is a Forbes article discussing an opportunity for the general aviation charter industry to change it’s operating model. It discusses a book titled The Rise of Collaborative Consumption and how the growth of social media may provide an opening for this concept in the charter industry.

And you thought that there were a lot of airline fees this year…
An ABC News travel article with predictions of what new airline fees we might see tacked on to your ticket price in 2011.

A female aviator with a male navigator who was lost at sea…not named Earhart.
This is a well-written, comprehensive article about the life of Beryl Gwynn Hart, the 14th female aviator in the U.S. to hold a transport pilot’s license.