If you have been reading this blog very long, you are aware that I have a Globe Swift. Actually it’s a Temco Swift, but Globe was the original manufacturer of the Swift and that’s how most people know the model. Globe eventually sold out their operation to Temco, one of Globe’s subcontractors, and Temco continued to make the Swift for a few additional years. Mine is one of those, built in 1948. 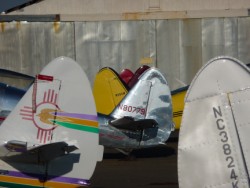 The weekend after the Reno Air Races, the west coast version of the International Swift Association fly-in was held in Sutter Creek, CA at Jackson, Westover airport (O70). Westover is a nice little airport with a single runway (01/19) about 3400 ft long located (according to my Flight Guide) 36 nm east of the SAC VOR. The main gathering of Swifts is at the home field of the Swift Association in Athens, TN (MMI) over the Memorial Day weekend each year. That’s quite a trek for the West Coast Swift contingent, so a West Coast version was established in 1985. (That’s higher math for me, but I believe the 2009 gathering will be the 25th anniversary.)

A few attendees arrive on Thursday for the early-bird dinner in town, though most make their arrivals some time during Friday. The Friday evening festivities are held on the airport with a BBQ dinner held in a really nice, privately-owned hangar just off the main parking ramp. Saturday usually finds several formation groups taking to the air for practice and formation qualifying flights. (The Swift Formation Training Program has been accepted into the FAA approved F.A.S.T. program for formation flight certification.) Occasionally a group of aircraft will fly out to a pre-arranged location nearby to tour the area. Otherwise, the day is spent catching up with old friends and making new ones. Saturday night is the traditional awards banquet held at a restaurant in town. Everyone enjoys a good meal and the results of the awards committee and people’s choice voting  are presented with appropriate trophies. Sunday usually finds the ramp emptying out as people head home to begin the Monday workweek.

The 2008 gathering found 37 Swifts on the ramp at Westover. Most attendees were from west of the rockies, though 3 or 4 brave souls make the trek in their Swifts from as far away as Georgia. As with any cult-type aircraft that is over 50 years old, the only way that you will find two Swifts that look the same is if they were intentionally rebuilt that way. The variation at this year’s fly-in ranged from an essentially stock GC-1A to multiple examples of the so-called Super-Swift. The Swift was manufactured as either an ‘A’ model with a Continental C-85 engine or a ‘B’ model with a Continental C-125. STC modifications to the powerplant are available for the Lycoming O-320 (150 hp), O/IO-360 (180/200 hp), the Continental O-300 (145 hp), IO-360 (195-210 hp) and the Franklin 6A-350-C1 (220 hp). The Super-Swift classification usually refers to an aircraft with an engine in the 180 hp and higher category. 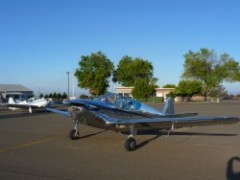 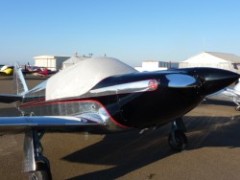 I, personally, lean toward the original look with the bigger engine. The added horsepower gives the climb capability to fly at the higher elevations and to take someone with you when you do it. An added STC also give you a higher maximum gross weight and, therefore, a greater useful load. Most people who make the change to the higher horsepower engines also modify the engine cowling to the more sleek look, doing away with the drag associated with the classic “Swift grin.” Often they will also modify the cockpit and hatch entry to a sliding canopy arrangement. 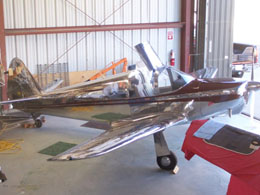 Most of the highly modified Super-Swifts climb and fly exceptionally well, but have lost the classic look of the original Swift. I guess I’m just not that interested in sacrificing the original look to go that fast. I’m not a purist by any stretch of the imagination and have several modifications to my Swift, I just haven’t changed the outward appearance on a large scale. I do have a 3-bladed prop and a Continental IO-360 installed, but have retained the original cowling. In the cockpit I have exchanged the original bench seat for Cessna 150-style adjustable seats and have removed the control yolks and replaced them with control sticks, topping the left stick with an electric pitch trim actuator switch. At some time in the near future I will be replacing what was a modified original instrument panel with a more modern version that will have the standard IFR 6-pack of instruments in front of the left seat. The original instrument panel with the control yolk arrangement only allowed a single row of 3 1/8″ instruments above the yolk, but with the yolks removed the panel will accommodate a more modern instrument installation. I’m sure I’ll have a post or two about that process. As with any 50-year-old airplane, mine is a work in progress.