In an article published on the CarsonValleyTimes website the Perlan Project was mentioned in relation to a hangar to be built on the Minden-Tahoe Airport (KMEV) and the Perlan Project’s connection to Dennis Tito, multimillionaire, international investment expert, manned Mars mission promoter and the world’s first space tourist.  The article also describes the sponsorship the project has obtained and introduces additional technical personnel who have become part of the Perlan Project.

The Airbus Perlan Mission II appears to be upping the ante. Besides breaking altitude records, the mission aims to collect data on the Earth’s upper atmosphere and ozone layer. To do this, the Perlan II will fly close to transonic speeds in a “near vacuum” with air density at less than 2 percent of that at sea level. In other words, this glider is being built like a spaceship. It has a pressurized cabin to allow sailplane pilots to reach the edge of space.

… construction of the Perlan II is currently finishing up in Oregon. He expects the sailplane to arrive at Tito’s new hangar at the Minden-Tahoe Airport by this October. Test flights from the airport will begin in spring 2016, possibly earlier. Although Minden is famous for “pretty frequent and regular mountain waves,” the crew will be heading to Argentina in the summer of 2016 for the actual record attempts.

In joining with the Perlan Project, Airbus spokespeople recognized the progress made to date by the Perlan Project team, many of whom were at AirVenture. They went on to say that Airbus shares the Project’s goals of research into flight with aircraft at very high altitudes, investigation of the impact of stratospheric waves on global weather patterns and atmospheric chemistry, and inspiring future generations to pursue careers in math, science and research. Airbus will be working with Perlan as it moves forward with the Perlan 2 mission, which will involve completion of a sailplane with a pressurized cabin and that is designed to fly to 90,000 feet.

I received an email today from a reader who has been following the Perlan Project. They currently are looking for funding through the IndieGoGo project website. The site has a lot of the latest information about the project. You can find it by going to http://www.indiegogo.com and searching for Perlan then clicking on the result. The direct link is http://www.indiegogo.com/projects/perlan-mission-ii-soaring-a-glider-to-90-000-feet
– thanks Miguel

Wednesday night (April 11th[2012]) I attended a program at the theater in the UNR (University of Nevada-Reno) student union hosted by the UNR and the Reno Air Racing Foundation. The program was one of a series of presentations under the title Pathways to Aviation.

The program’s main presentation that night was given by the Founder/Chairman of the Board and the CEO of The Perlan Project. 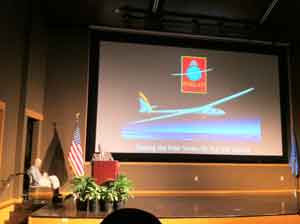 The first speaker was the project CEO, Ed Warnock, shown here with one of his opening slides.  In the words of their website:

Our mission is to soar up to 90,000 ft using stratospheric mountain waves and the Polar Vortex… The flight will take place in El Calafate, Argentina and is planned to fly in August 2013.

The project’s purpose is to soar a purpose-made glider up to the 90,000 ft altitude range in order to obtain scientific data concerning the ozone layer and weather patterns at those altitudes. 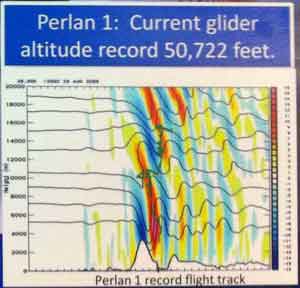 Record-Setting glider flight made by Einvar Enevoldson and Steve Fossett.

Perlan Clouds are iridescent clouds formed by a standing mountain wave in the polar jet. They occur in the 50-80,000 foot altitude range. They have the unique color that gives them their name (which supposedly means Mother of Pearl in one of the Scandinavian languages) because they are composed of water vapor, ice crystals and some derivative of nitric acid. The testing that has been accomplished to date has found that the thickness of the ozone layer in the vicinity of these clouds is reduced significantly.

The existence of weather phenomenon at those altitudes is not often observed and the current means of putting instrumentation in that area is unable to gather the data necessary for accurate analysis. The only instrumentation that has been up that high has been attached to an SR-71 or a weather balloon. The SR-71 can’t get good readings because it can’t do it without beating the air into submission in the process.  Weather balloons don’t disturb the air, they ride on it and are carried out of the area without getting much useful data. The Perlan Project intends to fly a glider to that altitude and gather data where they need it.

Why do they think that they can soar that high? 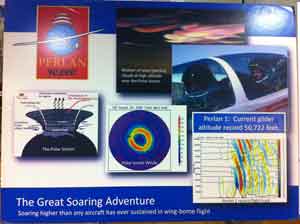 Mr Warnock described the weather phenomenon called the ‘Polar Vortex.” A circular jet stream forms around both the north and south poles. It remains above the arctic circle in the north, but extends as far north as 50 degrees south latitude at the southern pole. This places the polar jet over southern Argentina and New Zealand. When the ‘normal’ jetstreams making our weather patterns happen to wander under this polar jet formation in the vicinity of a significant mountain range a Polar Vortex forms that produces upward moving currents of air that can reach as high as 100,000 feet.

After this introductory information presented by Mr. Warnock,  Mr Envoldson took the podium and described the possibility of soaring to the 90,000 foot range. The graph shown above depicts the flight path of the record-setting flight that Einar Enevoldson made with the late Steve Fossett.

The white ‘bumps’ at the graph are the southern end of the Mountain range in western Argentina. The dark horizontal lines depict the wind direction blowing west to east, descending on the downwind side of the mountains and ‘bouncing off’ the valley atmosphere to form a mountain wave . The red areas are upward-moving areas of wind. A primary wave is just east of the mountain range and secondary and tertiary waves form downwind of the primary. The glider flight track is indicated by a green line. They caught the primary wave up to an altitude of about 35,000 ft, then moved downwind and found the secondary wave. They rode it upward to the record-setting 50,772 feet. 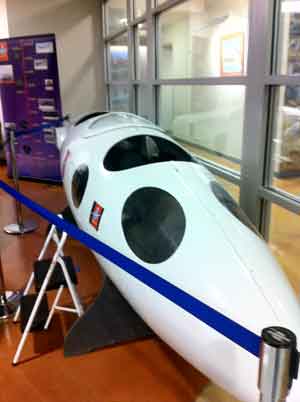 Both pilots were wearing pressure suits. The confined space in the glider was uncomfortable at ‘normal’ altitudes and as they climbed, the pressure differential caused the suits to expand. This made it even harder to move and eventually started to interfere with their ability to move the control stick. They finally reached a point where they made a conscious decision to terminate the flight even though they could have climbed higher.

The full poster shows Envoldson and Fossett in the glider that set the altitude record. You can clearly see the pressure suits.

The presentation included slides showing the fuselage of the purpose-build, pressurized 2-place glider that is currently being built.  The final photo here shows a mock-up of the cockpit that was on display.

They expect to have the glider completed this summer and will be conducting flight tests in Minden, NV about 45-minutes south of Reno. The area is noted for it’s excellent soaring conditions. Several world record flights have been made from the Minden Airport (KMEV) which took advantage of the formation of mountain waves along the Sierra Mountain range.

You can read more about the Perlan Project on their website at perlanproject.org and, of course, in the Wikipedia article here