I had intended to post this a few days ago, put I had a camera problem. Completely operator error. I had it set on video instead of photo. Got lots of pictures of the ground, sky, floor of the truck, etc., but nothing usable. Guess I need a preflight checklist for the camera now.

RARA Has a Sense of Humor!

I took this photo of the new entrance to the General Admission area today. 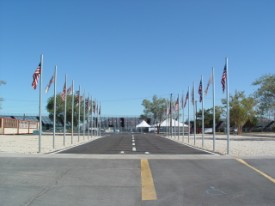 It wasn’t until a few minutes ago that I really looked at what was actually visible through the viewfinder.  If you have been to the Races the past few years, you will recognize that the entrance to the area behind the grandstands has been moved to the left of last year’s location. It also looks like it is going to be about twice as wide.  For the past few years, the drive-through entrance has been used as the general admission entrance.  The ticket booths are now moved to the left in the photo and parallel the flag-bordered entrance walkway.  If you look closely at the paved walkway, you can see that thay have painted a centerline dashed line on the pavement and have labeled it ‘Runway 11’, the numbers showing just past the end of the yellow line in the foreground.

Having your airplane based at Reno Stead in September must be like basing your plane at Lakeland in the Spring or at Whitman Field in July/Aug, although the personal hangers at Whitman Field are on the east side of the airport and AirVenture is held on the west side. Here at Stead, the personal hangers are all in the Race Pit area and the apron in the pits will become unusable in a couple of days. It is already impossible to taxi straight out to the edge of the apron and then turn parallel to the runway. More VIP tents and air-conditioned sky boxes are appearing on the apron every day. The area behind the grandstands, once a nice open, paved area is now filled with vendor tents, beer tents and port-a-potties. 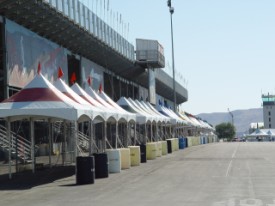 The bad news is that ‘our’ airport is taken over for about two weeks every year and is essentially unavailable to us. The good news is that we are right in the middle of the National Championship Air Races and, as tenants, receive season passes to the races in proportion to the square footage of our hangers. With a 50×40 hanger that means, I believe, 4 season passes, a parking pass allowing one vehicle access to your hanger in the pit area and a second vehicle access to the tenant parking area just outside the West gate. For me, that is worth the loss of the airport, but I am a hard core aviation enthusiast. There are actually tenants who complain vehemently every year about the Races taking over. That just doesn’t make sense to me.