There have been several thunderstorms in the area the past few days dropping huge amounts of water and spitting out lightning bolts. The lightning has started 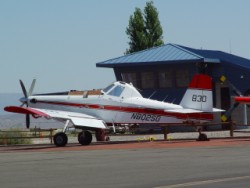 a few fires in fairly inaccessible areas and has put our local fire fighters to work. There were two fire-fighting operations  on the east side of the Sierras last year, one in Minden, NV and our local one in Reno at Stead Airport. This year, probably due to budget constraints, only the Stead tanker base is in operation.

We have seen several different types of fire-fighting aircraft at our local base. This first photo is one of the two Air Tractor AT-802 aircraft that are used for the smaller fires. This one is sitting in front of the fire fighter operations building on the east end of our ramp. 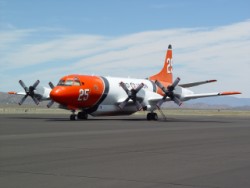 A few days ago I sat in my back yard and watched one of the Air Tractors and the P-3 Orion Tanker fly back and forth to a fire very near to where their Minden base used to be.; I walked out of my hangar yesterday and both of the Air Tractors flew overhead in close fingertip formation.

Our local base also is home to a Lockheed P2V Neptune that has been converted into a  water bomber. It was out making drops somewhere today. I caught it coming back for a refill as I was leaving the airport tonight. I heard it take off a couple of times, but never noticed the jet noise. 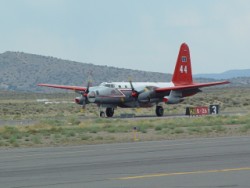 The big radials make the nicest sound anyway. The traffic pattern was pretty full today, but when one of the tanker aircraft needs to depart everybody clears out and lets them get to work.

The past few days we have also had a Huey helicopter, a twin Otter and two squads of fire jumpers/fire fighters staying on the airport. Their equipment identifies them as from the Boise BLM (Bureau of Land Management), probably on temporary duty in Nevada during our fire season. 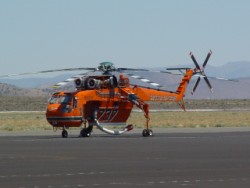 . It is operated by Erickson Air-crane based in Oregon. One of their other Helitankers (named Elvis) made a big hit at EAA’s AirVenture in Oshkosh, WI this week. The first video below is of their “arrival show” .

As great as it is to see all these aircraft fly, I really hope that this year they spend a lot of time just sitting around.