I’m almost recovered from the Reno Air Race event. It was about two weeks of long days and short nights. The weather was almost perfect for race week. Low 90’s (F) and usually a fairly light breeze. The only mar on the week was the loss of a Formula One plane and pilot on the Saturday before Practice Day. That has been covered in several other publications, so I won’t go into it. One of the fun times of race week is the arrival of the aircraft which have been invited to compete in the National Aviation Heritage Invitational (NAHI). For more information about the competition visit their website at http://www.HeritageTrophy.org. Briefly, it is a competition for aircraft at least 45 years old which have been restored to their original configuration. There is usually a really good mix of aircraft types invited to the competition and this year was no different.

The highlight of the arrivals for a lot of people was the appearance of two Grumman F7F Tigercats for the NAHI competition. I have been told that there are only three of these planes currently flying. With the two arrivals for the Heritage Invitational and the one already on the field as a race plane, three flying Tigercats were in the same place, probably for the first time since the 1960s. (Click for a larger photo.) 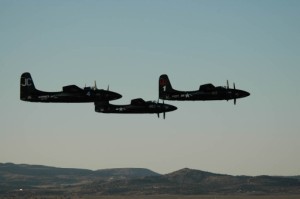 Wednesday evening after their arrival, all three were placed in front of the grandstands for a photo session, then they all took off for an air-to-air photo session over Pyramid lake. They were nice enough to make a few low passes on their return to Stead.

Here is a YouTube clip of the Tigercats arrival, departure for the flight and their return.

The race plane is “Big Bossman” owned and flown by Mike Brown (Number 1 on the tail). The other two Tigercats are “Bad Kitty” owned by the Historic Flight Foundation and flown by John Muszala of Pacific Fighters in Idaho Falls, ID and one owned by Joe Clark and flown by Clay Lacy (“JC” on the tail).