No flying this week. I had planned on taking in a local pancake breakfast on Saturday, but the winds were already gusting to 20 mph at 9 am. If I lived in the flatlands that probably wouldn’t have been too bad, but up here in the mountains that kind of wind makes the turbulence something you don’t want to experience.

Today the TAF for KRNO predicts 240/27G42 and the TV weather people are saying we could get 4-6” of snow by this time tomorrow. On the bright side, by Friday this storm system is supposed to be long gone with temperatures in the 70s again. 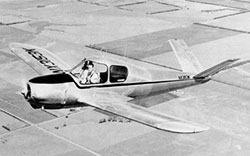 17-year-old pilot goes skyward whenever she can
This is from the Sacramento Bee but the article is about a 17-year-old in Tupelo, Miss. Courtney Foote is a high school senior who is definitely enthusiastic about flying…

Stinson Municipal Airport
This is from My San Antonio dot com. Those of you familiar with older airplanes will recognize the Stinson name from a line of personal aircraft built starting in the 1940s. Here is a little history of the airport that was named after the Stinson family and their Stinson School of Flying.

Flying high with aviation award
This is from SunLive in New Zealand. Guy Robertson is now 96 years old. He gave up flying about 40 years ago, but recently got back into a plane (as a passenger) to fly to London to receive the Jean Batten Memorial Trophy for his contributions to New Zealand aviation. The article includes an excerpt from his diary of flying the Curtiss P-40 during WW-II.

A-2 flies home to Wichita after 64 years
This is from the Wichita Eagle. Harry Ragland was a World War II bomber pilot but he had dreamed of putting a plane into production that he had designed. After the war he and 5 of his friends formed Allied Aircraft. The got their first airplane built, the Allied A-2, but shortly after a fire wiped out their company. Harry Ragland passed away in 2994, but the only plane he ever built has returned home to be placed into a museum in the Spring of 2013.