Either I’m getting pickier, or the number of good aviation articles has really fried up. There are still plenty of writers for the general and ‘breaking’ news, but I haven’t been running across many in the human interest category lately. 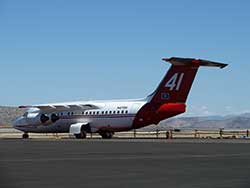 No flying this week, but I did manage to pass my third class medical, though. So I’m good for another two years. Next month I have two other projects to complete – a Flight Review and an annual inspection on the Swift. Guess I ought to go out to the airport and get something done…

The Stead Fire Base has closed down now, but last month there was a bit of activity at the base. A new fire bomber showed up for a few day that I had not seen before –  a BAE 146 configured to fight fires.

Veteran pilot receives Wright Brothers award from Federal Aviation Administration
This is from the Reading Eagle. Carl is from Maxatawny Township, near Reading, PA. Back when he was 17 years old (in 1947) he invited his girlfriend for an airplane ride. He paid a pilot to take the two of them up for their first rides. He was hooked on the first loop and has been flying ever since…